Make sure you stand out from the crowd

If you want to stand out from the crowd and express yourself in a really colourful and flamboyant way, or if you just fancy having some fun and a new look, why not think about using semi-permanent crazy colour hair dyes? They come in an amazing range of colours.

Brightly-coloured hair became all the rage in the Punk-rock era with many New Wave and Punk stars and their fans sporting spiky Mohicans and cropped hair-styles in shades of red, pink, orange, yellow, green and blue – all the colours of the rainbow.

The dyes are easy to buy and use. They are cheap enough and come in little pots as creams and gels you simply comb through your hair. You need bleached hair though really for the colours to show up the best.

Bard of Ely with green beard 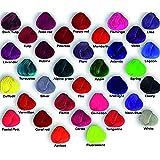 Why I use colourful hair-dyes?

I am a singer-songwriter and like to express myself in an artistic way and draw attention to myself on stage. I also need to get as much publicity and exposure as I can and I find having coloured hair and/or beard gets results. Photographers want to take my picture, and people who see me performing remember me for my look as well as my songs.

I really got started using semi-permanentt hair dyes back in 2003 when I was a compère and performer at the Green Man Festival in Wales. Knowing I would be on and off stage all day I thought dyeing my goatee bear green would be ideal for the festival and to express my image as an artist with a lot of interest in nature and the environment. My green beard was an instant hit and I decided to keep it.

People I met back in my normal off-stage life in Cardiff liked it. Teenagers on the housing estate I lived on would give me the thumbs up and say how “Cool” they thought my beard was.

I was using Apple Green as the shade and have bought pots of dye from the Directions range by La Riche. Because my hair and beard are going grey I didn’t even need to bleach my hair and whiskers first to be able to use the dyes. This is one advantage of getting older I thought!

When I moved to Tenerife I became even more adventurous and have had my hair dyed purple whilst sporting a green beard, have done all my hair and beard in green or in turquoise and have also used Spring Green that actually looks more like a shade of blue.

I started getting called Green Beard or “Barba Verde” or Spanish. I ended up with a colour photo of me in each issue of the Tenerife Sun newspaper in which I had a regular column. I was shown with my green beard and a caption saying: “Poet, musician and amateur naturalist STEVE ANDREWS”. This established clearly who I was and made me more of a local celebrity.

Portrait of the Bard of Ely

A Spanish artist called Paco de Colmenar had seen photos of me with purple hair and green beard and when I had it all turquoise. He felt inspired to use these images to paint portraits from and made an excellent job of it. I use these pictures he created as further eye-catching and memorable publicity for me.

They say a lot about me as an artist and a person. They show that I am eccentric, artistic and a colourful character who is not afraid of being in the public eye and who likes to express himself.

Toyah - I want to be free

Billy Connolly and other celebrities who use hair dyes

The comedian, singer and actor Billy Connolly started dyeing his goatee beard purple. I never did mine that shade because people could say I was copying him but I still get people calling me “Billy.”

Musician, producer and songwriter Mark Hudson is also famous for his appearances on the X Factor helping Sharon Osbourne as a Vocal Coach. He has had his beard in all colours possible and was given the nickname “Weird Beard.”

Singer, actress and TV personality Toyah Wilcox, who came to fame with her hit songs back in the 1970s Punk and New Wave scene is another celebrity who has often dyed her hair in flamboyant colours.

In the 1980s and the time of the New Romantics, Boy George came to fame as the gender-bender singer of Culture Club. George often dyed his hair in bright colours too like the flaming crazy colour red he had it in at the time of the band's hit War Song.

Besides being easy to use they are equally simple to undo if you want to revert to your natural colour or change to another shade. To apply them in the first place you just comb or brush the dye through your hair and leave it to dry. You are supposed to rinse the hair then but I usually don’t bother because it makes the colours a lot lighter if you wash your hair. This shows how easy it is to get rid of the colours by shampooing them out, although this may have to be done several times. When the dyes have sufficiently faded you can put a darker colour on top or can try mixing and making your own shades.

And of course, these dyes can just be used to colour streaks or highlights in your hair. The choice is yours and there are very many dye colours to choose from.

Bring a smile into someone else’s life

I find that all sorts of people appreciate seeing a man with a brightly-coloured beard. People smile and may even ask if they can take a photo or pose for a picture with me.

Last year, while waiting for a flight to the UK, I had a whole bunch of Spanish schoolchildren who wanted to be in a photograph with me. It starred with just three boys but soon there were girls and more boys and the lad that was taking the shot had to go back a bit to get us all in the photo.

When I finally got on the plane the air hostess complimented me on my beard too.

When I arrived in Cardiff I was walking down a busy street and a homeless man begging at the kerbside called out: “I like your beard, mate.” I had brought a smile to his face despite his poverty.

That is the thing about using semi-permanent hair dyes, they are fun and they let us bring some colour into an often dull and miserable world!

Find out what another hubber has to say about hair dyes