If you are looking for a gift for someone who adores our feline friends, or if you are a cat lover yourself you need to check out the jewelry with cats I have selected for you. Cats have been the inspiration for jewelry design for centuries. We all remember the Egyptians once worshiped them as gods and some say, the felines have never forgotten this! This selection of fine jewelry with cats capture the essence of these fascinating creatures perfectly.

Cats And Jewelry In History

Few people are as enthusiastic in their affection as cat lovers; since antiquity, jewelers have promoted this fancy for cats with jewels that pay homage to the feline. Later, many of the world's master jewelers would also stake their artistry on the cat by honoring its form with a myriad of cat-inspired creations.

For at least 9,500 years, humans have loved cats. A Cypriot grave with a human and a cat is evidence of this animal's early domestication. More famously, Egyptians anciently revered them and were among the earliest people to pay tribute to the creature by carving amulets and other jewels inspired by them. Even today, jewels are made to depict the cat deities that were honored in ancient Egypt. Contemporary artisans are influenced by the appearance of cats on Egyptian tomb walls.

Ancient Egyptian jewelry artisans crafted cat jewelry that was worn as an amulet. Such amulets might have garnered the wearer certain protections. These jewels would certainly be worn to honor the beloved creature for which it was a crime, punishable by death, to kill. Young women of Egypt wore utchats, cat amulets that were thought to increase fertility. It was hoped that the woman would deliver as many children as the kittens depicted on the jewel.

In ancient times the cat was worshiped as a goddess. Depicted here is Bast or Bastet - the goddess of music and dance, pleasure and love. Traditionally this necklace it presented as a symbol of love and lasting happiness.

Cats and jewelry in Europe and Asia

As they spread across India and into China, cats began to be associated with magic and were very well revered across Asia. They were also honored in Rome and throughout the Roman world. Romans are popularly credited with introducing the cat to England. They would continue to be honored in Europe until the Middle Ages when they began to be associated with witch hunts; however, humans would not be able to withstand the charms of cats for long; the felines found their way back into homes and their forms were once again translated into jewelry and art.

Whether worshipped or simply regarded as a lovable pet, cats have been carved into jewels of bone, coral, wood, and other natural materials. They have been cast in bronze, silver, and gold. The cat form can be found in

jewels of each notable historic jewelry era and in many places around the world. Victorians admired cat's eye jewelry, but also employed them in cameos; carved into jet, a popular natural material known for its shiny black color.

Some of jewelry's most famous designers have also derived some of their inspiration from the feline form. In 1910, Carl Faberge designed a famous cat using jasper, emeralds, and gold. As recently as the 1990s, Paloma Picasso designed a silver cat pin for Tiffany's Graffiti collection. Our feline friends were wildly popular as motifs among costume jewelry designers. Rhinestone pins and bakelite brooches are among the most popularly sought-after vintage cat jewels. Vintage cats jewels made from both precious and semi-precious materials continue to sell well at both traditional and online auctions

Cat jewels from historic eras are particularly collectible, but contemporary jewelry is also popularly sought after. Throughout time, people's love of cats has not diminished; instead, it has grown. Finding a charm or vintage jewel is easy today given the wide range of options via the internet. From lockets to lariats, cat jewels mark the ongoing appeal of our feline friend.

Brooch and pins are easy to wear and will look great on a coat, jacket or scarf. 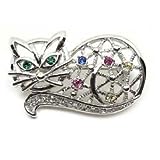 A few years ago I bought my mom a beautiful vintage feline brooch. A real vintage piece. It was quite expensive because beautiful signed vintage pieces are often rare and sought after. But you can find some really nice vintage inspired cat brooches that are affordable and beautiful. Here's one that have a true vintage look. 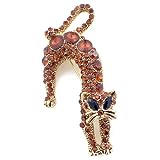 If you prefer real vintage pieces, here's an handpicked selection of vintage brooches from reputable sellers

Bastet amulet between circa 280 and circa 180 BC

Make someone's day by gifting them one of these this delightful pendant. 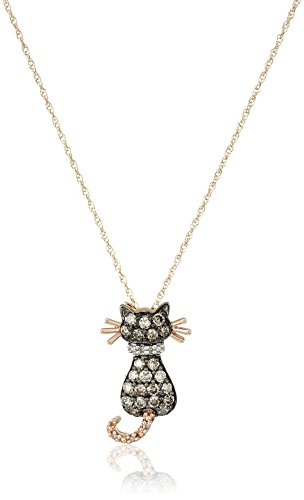 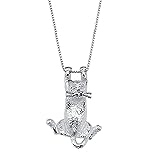 PalmBeach Jewelry Sterling Silver Cat Charm Pendant and Chain 18"
Palm Beach Jewelry offer this delightful pendant for sale. Made from sterling still the design is entitled 'Cats meow' and is sure to be a huge hit. The whimsical design has this intrepid pussy hanging from an 18 in sterling silver chain.
Buy Now 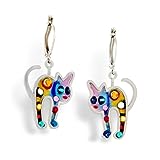 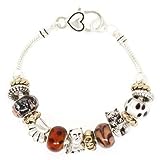 "In ancient times, cats were worshiped as gods. They have never forgotten this." -Anonymous

Take the poll and let us know

Do You Love Our Feline Friends?