I live in the country, raising poultry. Needless to say, there's a lot of dirt and mud, bird poop and other nasty things out in the yard. I wore cheap rubber boots for many years, until I was introduced to muck boots by a neighbor. Now I wear Muck boots as my shoe of choice, and so should you!

You might not think you need boots if you live in the city. However, I introduced my city-dwelling brother to these, and he now wears them while working in the garden, or when it's raining outside. So if you live anywhere that gets cold or wet, then a pair of Muck boots is for you!

The first pair of Muck boots I received as a present from a friend. As a rancher, he needs the absolute best boots to keep his feet warm and dry while working cattle. He works out in extreme conditions 24 hours a day, 365 days per year. He had purchased a pair, and they were too small. Rather than return them to the store, he presented them to me. I was ecstatic, as I always wanted Muck boots! Although they were a bit large, a pair of heavy wool socks made them fit just right.

The pair he gave me were Wetlands Muck Boots. While the average person won't need this particular boot, they are great for anyone who spends a great deal of time in wet or cold conditions.

Muck Wetland Rubber Premium Men's Field Boots
Comfortable in temperatures between 70 degrees and minus 20 degrees, the Wetlands Muck boots will keep your feet dry and toasty during the winter months. They are 100% waterproof, so you can even wade through muddy pools of water and not worry about the water soaking your socks. The tops of the boots come to just under your knee, which keeps your calves warm. They are tight enough to keep out cool breezes and moisture, but loose enough if you want to tuck in your pants. Either way, they are quite comfortable!
Buy Now

I wore my Wetlands boots daily for almost two years before they finally wore out! Even then it was the insole that became worn, and not the boots themselves. While I still wear these on occasion, I decided it was time for a new pair.

While searching for the Wetlands Muck boots, I came across the "Chore" all-conditions Muck boots. While I liked the original Wetlands boots, these seemed to be more geared to the every day person such as myself.

Like the Wetlands, these Muck boots can handle extreme conditions between sub-freezing temperatures, all the way up to 85 degrees. I live in Texas, and it gets over 100 degrees in the summer time. I wear them all year - even in the summer - and I find them comfortable even when it's hot!

Muck boots are easy to put on and take off. The uppers have a stretchable "bootie", that pulls on just like a sock. They are not nearly as difficult to don as rubber boots or cowboy boots. To take them off while standing, I just use the toe of my other foot at the heel, and push them off!

The insoles are padded, so you can wear them with, or without, socks. In the summer, I tend to wear them with just my bare feet, but in the colder months, they feel extra warm with my wool socks.

I cannot say enough great things about my Muck boots! However, you might want to know some of the features, and here are the best: 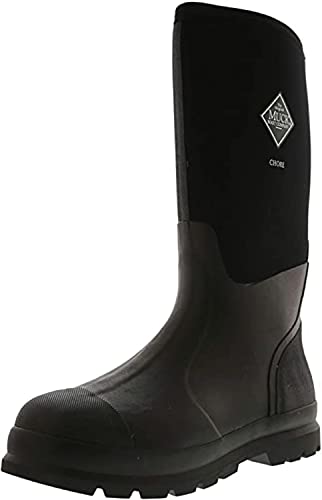 Muck Chore Classic Men's Rubber Work Boots,Black,Men's 12 M US / Women's 13 M US
1) They are 100% water proof. Moisture will not get into your boots when wading through puddles. 2) They are easy to clean. Mud or dirt? Simply take the water hose and wash them off!
Buy Now

3) The toes are triple-reinforced, so if you stub your toe, it won't hurt and your boots won't get banged up

4) The heels are quadrupled-reinforced, so you won't have to worry about them wearing out anytime soon

5) They are light weight. Most boots are a bit on the heavy side, but these won't tire out your legs if you wear them for long periods of time

6) The sole is super tough! I have walked on rocks and stepped on nails, and never had a puncture.

What I really like about all the Muck boot styles is that they are comfortable. I have a few foot problems, so I have trouble finding boots that not only fit, but feel good. Muck boots actually have great arch support in addition to quality construction. You can wear them all day, every day, and your feet feel as good as when you first put them on.

About the Muck Boot Company

Back in 1999, the people at Muck Boot Company decided there was a need for a quality boot that was not only durable, but comfortable. They came up with the idea of 100% water proof boots that were tough enough to wear in extreme conditions, yet comfortable enough for every day wear. Thus, the Original Muck Boot was invented.

Since that time, the Muck Boot Company has come up with over 20 styles for both men and women. They are for just about everyone: my step-son wears the "Arctic" boot on his deep sea fishing boat in Sitka, Alaska. Other styles include the Equine, the Tack, the Muckmaster, and the Company (steel-toed). Muck boots also come in camouflage for hunters!

If you spend any time at all outside, then you should purchase a pair of Muck boots. They are of a quality construction; are durable, and are one of the most comfortable boots you'll ever own. They are a great investment, and your feet will thank you.