Remember that Old Plastic Lunch Box You Used to Have?

I remember back when I was at primary school, I had a little red snoopy lunchbox. All lunch boxes back then had plastic clips to open and shut the box, and a little plastic handle on the top,

I remember each lunchbox contained a screw top flask with a little handled cup on top as the lid.

Before plastic lunchboxes it was tin lunchboxes, and now it would seem they have been replaced with zip up lunch bags.

Although with all the retro accessories frequently coming back in to fashion, I am sure it will not be long before the 80s and 90s lunch boxes make a come back, after all there's no school like the old skool!

Recently my partner was looking for a lunchbox for work, I laughed at him initially because he was looking at the one's like our sons have, Ben 10 and Transformers etc. But it got us talking about lunchboxes we had as children and so I decided to look them up online and see if i could get him one from the 80's.

Why not? who says just because we are adults we cant take a lunchbox to work? I am sure our children will laugh at us but why should they get all the novelty at lunchtime hehe. Here are some of the best ones that I found.

Dairylea- Does anyone remember the dairylea lunchbox? lots of kids seemed to have them.

I am not really sure why they became popular as they just said 'dairylea' on the front, although Dairylea triangles were popular when I was at school so maybe the lunchboxes were free.

A-Team- The A-Team lunchbox was a big hit with boys in the 80s. You can still buy them on EBay from £15.90 and it comes with the original flask too.

ALF- I used to love this weird little alien animal called Alf. Does anyone else remember the film or TV show?

ET- Another popular Alien from the 80's was of course ET. Ever since the hit film ET was released in 1982 children everywhere was going mad for the Extra-Terrestrial merchandise.

You can buy the ET lunchbox and flask on EBay from £5.09.

Fraggle Rock- "Dance your cares away, Worries for another day, Let the music play, Down at fraggle rock." For those of you who are now singing this in tune you probably either owned or knew someone who owned a fragile rock lunchbox haha.

I think everyone used to watch Fraggle Rock back then, my favourite was Red the orange haired female fraggle who always wore her hair in pigtails.

You can buy a Fraggle Rock lunchbox and flask from EBay, prices start from £6.36.

Garfield- Garfield started of as a comic strip but was made in to cartoon in 1982. Garfield instantly became every child's favourite cat.

The first lunchbox came out in 1978 when Garfield was still a comic strip and was a little plastic yellow one. Then in 1982 after the release of the cartoon a red one came out.

You can still buy these from EBay for £9.99. You can also purchase Garfield lunchboxes from Amazon however they are currently out of stock.

Gremlins- I am not sure how many people are aware of this, but Gremlins are a real myth in England especially with Airmen. The RAF used to blame Gremlins for unexplained accidents that occurred during their flights and many of them swore they saw creatures messing with their equipment.

Children's author Roald Dahl had his own experience with Gremlins while in the Royal Air Force and wrote the hit children's book 'The Gremlins' which was later snapped up by Walt Disney.

In 1984 Warner Bros released the first Gremlins film. I always found them quite scary as a child but I liked Gizmo. You can buy the Gremlins lunchbox and flask from EBay for as little as £6.36.

He-Man- "By the power of Greyskull" My brother had a He-Man lunchbox, I think most young boys did back in the 80's after all there wasn't many cartoons as popular than He-man.

The lunchboxes came out along with all the other He-man merchandise back in 1983. You can still buy them from EBay for £19.00 or alternatively you can bid for them and keep your fingers crossed for a cheaper deal.

You can also purchase one from Lunchboxes.com for the extortionate price of £265.00

Errrrm!! I think we will stick with good old EBay thanks.

Pac- Man- Pac-man was a 80s arcade game and is still popular today. It is also classed as a video game classic by everyone from the 80s until now.

Pac-man became a social phenomenon that sold million upon millions of merchandise, one being lunchboxes which are still available to buy now from £5.00 at fleamarketstore.com, or on EBay from £17.84.

Popples- I had a popple they were cute little teddy bear type creatures that rolled up into a ball and could then be unrolled in to a multi coloured animal with pom poms on the end of their tail and bright fuzzy hair.

In 1986 there was a cartoon on the Popples. The lunchboxes were popular with little girls in the 80s and can be bought on EBay from £25.00.

Rainbow Bright- Rainbow Bright who was originally called Wisp first featured in cartoon in 1984 along with her horse Starlight.

The cartoon became hugely popular with young girls and eventually you could buy the Rainbow Bright Dolls and notebooks and of course Lunchboxes.

You can find these lunchboxes on lunchboxes.com for £65.00.

I remember having a little yellow rainbow bright telephone set where you had two phones with a wire attached in the middle so you could have the phone's in separate rooms ha ha.

Sesame Street- Sesame Street has been around since 1969 and was a pre school educational programme.

It included characters such as Big Bird and Bert and Ernie, Elmo and the cookie monster.

Does anyone remember when Sesame street hit the charts?........"Can you tell me how to get, how to get to sesame street."

You can buy the Sesame Street lunchbox at EBay from £4.79.

You can also buy them from superbackpack.com for £8.71.

Star Wars- Star wars has been around since 1977 and is still hugely popular. Star Wars has bought out a lot of merchandise including Figures, Play sets, Lego, Video Games and the list goes on and on and ON!!

It was very common to see young boys carrying their Star Wars lunchboxes to school back in the 80s, and you can buy the originals from EBay for £29.99.

Super Mario- Mario originally appeared as an extra in a number of platform games, his first being Donkey Kong.

In 1983 he was put into his own game 'Mario Bros' along with his brother Luigi.

From then on, Mario became a hit and as he is also the Nintendo mascot, Mario is considered to be the most famous video game character in history.

Transformers- The Transformers cartoon first came out in 1984 and has remained popular up to this very day.

It is strange to think that when I was a child Transformers was popular and now my children are asking for the latest Transformers toys.

Their Dad had a Transformer lunchbox and now they do too. You can buy a 80s lunchbox from EBay for £11.44.

If you have memories of a character lunchbox that you had while growing up feel free to note it down in the comments and I can add it to the list.

Who knows they could all be back in the shops some day!

Do you have a retro lunch box? 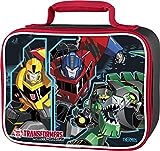