Fiona is based in SE Qld and is an enthusiast of all things art & crafty. She is a qualified Library Technician, amongst other things.

Show me a girl who doesn't want to feel and look great!

I'm never going to be the tall, leggy stunner. But I do love to feel good about myself, and I love to have my nails done.

The cost to have them professionally done every fortnight was beginning to take it's toll, both in terms of financially expensive, and being time costly too. Most Thursday nights I had more to do than just get my nails done, and maybe a cuppa thrown in for good measure.

So I set out to find some great products that I could buy and use myself at home, to strengthen my nails (which were pretty weak naturally, but grew worse from being covered in acrylic), but also that had good colours, coverage, and was quality.

Enter Sally Hansen. Her product's have been around for as long as I can remember caring about that sort of thing, and I've not really heard much in the negative about them.

So here's a few of her products that I've tried so far, and how effective I think they are!

After several years of having my nails "done" at a professional salon, the continuous application of the acrylic coating - and all the other chemicals deemed required - left my nails weaker than they had been naturally, prone to splittling, breaking and peeling.

I happened to go to the post office one day and was served by a lady who had nails of a remarkable thickness, much like one associates with having acrylics. It was her natural nails.

Being interested in achieving such a strong set of talons myself, I asked her what she used, and Sally Hansen's Miracle Nail Thickener was the reply.

"Paint it on once every day for four days, remove, let them breath for four days, then start over," the post lady said to me, which is pretty much the instructions found on the packaging.

So bought it I did, and try it did I, and do you know, I now have nails that withstand all but the most brutal of physical work.

When purchased my first bottle, I was religious in its application, and my nails were noticiably stronger and thicker within two weeks.

I have been using it for several months now, and I can confirm that it does indeed work.

My only beef with the product is that it gets quite thick, bubbly, and difficult to apply after a time. The addition of some nail polish thinner (or in an absolute pinch, the tiniest drop of remover) has restored it well.

While my nails have certainly become stronger, I shall continue to use the Miracle Nail Thickener for a while longer yet, especially as a base coat before applying anything else. I would strongly recommend it to anyone trying to get their nails to stand up under their own weight, as it were.

My nails after using the Miracle Nail Thickener

What you could do with your stronger, longer nails: water marbling

The Insta-Colour range is fantastic for those of you - like me - who have much to do and limited time to take waiting for nail polish to dry.

The brush is wide and the polish quite thick, so it needs only one coat to achieve a good coverage.

As I'm quite fidgety and impatient at times, this stuff suits my tight schedule very well.

It dries as quickly as it says it will (your usual 60 seconds), and doesn't tend to bubble or peel.

Like most dark or solid colours, I find that it does have a tendency to chip if I'm too hurried about it to seal it with a decent top coat.

I really don't have a bad thing to say about it, actually. I've even used it to get a big fancy, and painted just the tips for a "french manicured" look with a difference. I think the brilliance is mainly in the brush

I look forward to expanding my collection with a few more colours in this range!

I love the colours in this range - they truly are hi-definition.

I own the gold and the green - which are called Lite and Hi-Res respectively - and they look fabulous.

They go on well, but have a tendency to chip if I'm a bit rough with my hands.

Doesn't tend to bubble as the polish itself is a nice, middle of the road consistancy. Only real problem I have is that they take several coats to get a really strong colour, and I often end up budging the job because I fidget and want it dry yesterday. 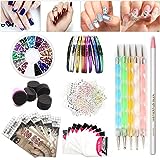 I originally purchased the blue and the white colours to play with doing some different "french manicure" looks, and the glitter for a nice top coat.

I have to say, when I was using them just for the tips, they worked quite well - very well, in fact. The blue as an all-over colour also worked well, and I haven't had occassion to do my nails completely white, but I have to say, the glitter one was pretty disappointing.

It smudged very easily, and didn't really leave much of the glitter behind without continuous application, which then made the end result lumpy and awful. It also had a tendency to make any block colour underneath streaky - not the look I was hoping for!

I may try it again sometime, but I can't say as I'd recommend it (the glitter one only, that is).

I've used the blue and the white for tips on a number of occassions, and so long as I twirl the bottle first to mix everything, it works like a treat.

I would recommended them more for people who have the time and the patience to sit still while they dry, which I generally haven't.

For details and decorations

This was the product I was the most excited to find, after the Miracle Nail Thickener.

Unlike the Miracle Nail Thickener, it's not actually all that brilliant.

The premise of the application device is like a felt tip pen with a nib that you have to pump to get the "ink" flowing. It's also recommended that you don't put it directly onto your nail without use of a base coat, which leads me to believe that the chemical makeup is somewhat different to your usual nail polish.

Purchased with intent to get really arty and clever, I've tried using it almost every time I've put colour on my nails, and it leaves me very underwhelmed. A good device for dotting work, but lines are quite out of the question.

I think the idea is brilliant, however the execution isn't quite up there where it should be.

I'm hoping to find some polish in bottles that have the thin, long brushes that are meant for decorations and fine detail work. I haven't seen any by Sally Hansen to date, but that doesn't mean they aren't out there, or on the cards.

I purchased one of these because, as i've probably mentioned a few times now, I like quick and easy nail polish.

The colour I chose was silver or chrome, and it took forever for it to come out and was really, really patchy and chunky.

I couldn't get a decent application, even shaking it till my arm near fell off didn't seem to get the flow moving enough to get sufficient polish on the brush.

I might get a different colour some time, maybe a more traditional colour, as I suspect that this may have had something to do with the problem.

Like the pen, the idea is very good, but the hardware needs some tweeking before I would start using it regularly.

I purchased this originally when the Miracle Nail Thickener got too thick and was giving me the irrits.

It was meant to be an alternative for a base coat, and also a top coat to make things look all wet and shiny!

As a base coat, it was pretty ordinary, other than the gloss and shine. It didn't visible/noticably improve the condition or strength of my nails.

As a top coat, I find it works wonderfully. I find the darker nail polish colours tend to chip very easily, and with the Diamond Strength this is lessened by approximately 50% of the time.

It also dries pretty quickly, a perk as far as I'm concerned, and doesn't smudge any fancy stuff.

Top points as a top coat, but if you're looking for something to strengthen your nails, I'd stick with the Mirable Nail Thickener, or an alternative product.

I was looking for an alternative to the Miracle Nail Thickener that wasn't so prone to becoming thick and yucky.

I've had this stuff for about a week now, and you're supposed to apply a coat once every three days, remove after seven, and start again.

It goes on quite nicely - it's thicker than your normal nail polish, but goes on smooth. It makes my nails look like they have facets like a diamond, which is kinda cute actually.

I'm finding it chips at the edges really quick and easily, though, and I'm not happy with that aspect of it.

Haven't had it long enough to confirm if it's a viable replacement, so will update and let you know once I've tried if for a month or so.

Some other quick and useful nail care tips I've picked up - Because there's more to beautiful nails than the polish!

As much as I enjoy having brightly and beatifully coloured nails, there's a whole heap of other things you can do to keep your hands looking happy and healthy - that don't include the application of nail polish!

Suggestion for saving that ripped nail

Whether you love them or hate them, Sally Hansen nail products are here to stay.

There's a very wide variety of cheaper products on the market, and at the end of the day, you have to make your own decisions as to what it is you're looking for in your nail products.

For me, quality is definately important, and cost effectiveness comes into it too. I find Sally Hansen to be of (generally) good quality, and far more affordable than going to a nail technician/salon every two weeks.

There are some more fabulous Sally Hansen products out there that I haven't tried yet, and as I get to, I hope to continue to update this lens.

If you have any recommendations you'd like to share, I'd be very grateful, but I'd love to hear your opinions on the stuff I have tried, and maybe any other products that aren't Sally Hansen that I should try!

How do you like your Sally Hansen? - Is she the nail product for you?