The mythical creature the unicorn in times past was considered to be real, and while everyone knows at this time that isn't the case, it hasn't done anything to hurt the popularity of the amazing creature, which is primarily known for looking like a horse with a long, pointed horn protruding from its forehead.

Some people do get a unicorn confused with another mythical creature - a Pegasus, which also has the body of a horse, but is able to fly with magnificent looking wings.

Even in art and face painting this mis-identification is carried over. As you'll see, some unicorn's bear wings and some of what are identified as a Pegasus having a horn in the middle of its forehead. The wrong look is of course the same, and the only way you know what a person is thinking is if they call it a Pegasus or a unicorn while being a combination of both.

With these unicorn face paintings for children, most of them are exactly what they are identified as, but one of them are called a unicorn even though there are wings included in the design. I kept it in the article anyway because it really is a good face painting design, and after all, who really cares if creatures that don't exist are wrongly identified or designed. It's how the art looks, especially when it comes to painting children's faces in a way that delights them and brings them happiness.

For making this cute face painting for a child with a unicorn theme, there are really only a couple of things that need to be known to pull it off.

First, you place the color base on a part of a colorful canvass. In this case the pink was put on first and then the blue second. Once that's done it's only a matter of having a design in mind to being to apply to the face.

In this case there were only two simple colors used once the foundation was laid - black and white. The artist made the unicorn head and the swirls in black first, and once they were completed added the white highlights to complete the look.

Finally, the white stars were made of that color first, and afterwards the black was applied.

This is a case where the unicorn is part of a larger design where it plays an important but somewhat complementary role. The overall design is one that is magical and playful, displaying a terrific little world on her face for all to enjoy. Lot's of fun. 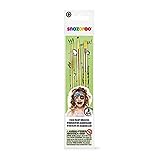 One good idea for making unicorn face paintings is to include some of the elements associated with "My Little Pony." This has that look, with the long, flowing red mane that the litte horses have. It won't matter to children that the unicorn has the look, as they won't really care.

Many unicorn pictures already incorporate that look into them, so it won't be unfamiliar to anyone, and it simply looks great, as you see below.

Since there is always a sense of wonder surrounding the unicorn, including the swirls and interesting lines always enhances that, as does the inclusion of some glitter to add some sparkle to it. We all know how little girls love that on their faces.

This is the face painting example mentioned earlier that combines a Pegasus with a unicorn. It's very doubtful whether or not the artist really knew the difference when it was painted.

It's the inclusion of the wings that make this what it is, and even though it's not based upon the traditional myth, it still makes for a fantastic face painting design.

Using the colors of the rainbow within the wing design looks amazing, as does the purple and blue base over the eyes. I like the doe eyes of the unicorn, implying this is a little female unicorn painted on the little girl's face.

This unicorn was included in the face painting example because of it being done as a standalone piece.

It's cute and fun, but it does leave a little out when you contrast them with some of the others in this gallery of unicorn face painting photos.

The mane of the unicorn look nice with the red and blue, making me wonder if it was done as some type of patriotic event because of the color combination of red, white and blue.

One thing I would have done differently would have been to change that eye. The straight line and its angle makes it look like a made unicorn. Now who wants a mad unicorn painted on their face?

Unicorns are fun subject matter to play with, as the mane, as you see below, offers the most flexible part of the unicorn to be creative with. Here we have a mane that is made in the color and shape of a rainbow. It's cute, and it is a part of that magical sense and feel when thinking about unicorns.

Again you have the pink base laid down first, with the colors of the rainbow added next. From there the unicorn was lined in.

This isn't as hard as one may think, as all that needs to be done is have an image of what you want already in your head, or just illustrate it on paper before starting your work.

When applying the colors before the outline of the unicorn, you simply have to picture or envision where the lines will go when completed.

As for the head of the unicorn, it looks like it was illustrated first and then colored in with the pink color. From there the rainbow colors were added and the lines of the main afterwards to finish it off.

If you have have a child that wants a unicorn face painted on them but are a little stumped, you'll never fail if you think of using three things in the design. Along with the unicorn, add some rainbow color, stars and swirly lines, and you'll be sure to delight the child. It's as simple as that.

For the more creative types that would also work, but there are a lot more elements that could be added to satisfy your own creative urges and impulses while delighting the child you're painting the unicorn on.

If you're an adult and want a unicorn design on your face, all of these guidelines would apply as well, depending on your personal preferences.

Unicorns are a lot of fun, and the usually friendly and powerful creatures portray as sense of wonder and of the mystical which children always gravitate towards and appreciate.