What makes a person unforgettable? Is it their great smile or the softness of their skin?

Do they have a face that isn't easily forgotten with a voice that sounds like angels? Or is it a fragrance like Wind Song that captivates you and pulls you into always thinking about them?

Prince Matchabelli seemed to think that the way a person smells will simply make you so irresistible that you are always on someone's mind. Did he have a point? Was the prince right?

Copyrighted Material by Favored1. Do not copy. Photo credit by Favored1 or Amazon unless otherwise noted. This artwork is licensed under the Creative Commons Attribution-ShareAlike 3.0 License.

What's that smell? - Are people really drawn to one another through the sense of smell? I think they are. What do you think?

Is it possible that a fragrance can change a relationship?

Once upon a time...well, there really was a prince who designed wonderful fragrances and called them the Prince Matchabelli perfume line.

His name was Prince George V. Matchabelli who was once a Georgian prince of the Soviet Union and ambassabor to Italy in the 1920s. He later came to the United States after the Russian Revolution. While the Prince and his wife Princess Norina (who was an actress and went by the stage name of Maria Carmi) lived in New York City, they opened a quaint antique shop on Madison Avenue called Le Rouge.

However, it wasn't until 1926 that the amateur chemist, Prince George began the Prince Matchabelli Perfume Company, in which all his perfumes were specifically designed for his elite clientel. Some of them I'm sure passed this tradition down to their daughters and family members.

His first perfume was called Princess Norina named after his wife, followed by Queen of Georgia and then Ava Maria. Oh how every girl would love to have his honor given to her.

Soon after Princess Norina began designing the crown shaped bottles, which became a signature for the company's perfumes. The Matchabelli family crown design was introduced in 1928, and so the love affair with the prince began.

For me, this bottle says it all and I truly feel royally loved each time I have received one of these treasures. They are very rare now and hard to find, so if you do come across one of them ... don't give up the crown!

Your Windsong Stays on My Mind ...

In 1956 Prince Matchabelli created a fragrance that is still on the minds of the customer.

I remember when growing up seeing fragrance commercials, but I have to tell you ... the Wind Song bits really stuck with me.

You may not know who he was, but perhaps this Wind Song commercial is one you never forgot. If anything I can imagine that you've heard the song.

Their Wind Song claim: As Individual as you.

My husband bought this set for me for Christmas one year. I haven't seen this combination in some time. It's a great value for the travel size cologne, body lotion and dusting powder that can be refilled (when you can find it)!

Please note that it is a cologne and not the light body spray that comes in this packaged gift set. However, if you want the Wind Song body spray it does come in a travel size as well. I absolutely love these!

You were always on my mind...

You were always on my mind.

Want your "prince" to notice you? 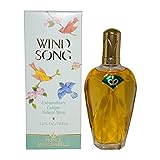 Wind Song By Prince Matchabelli For Women. Cologne Spray 2.6 Oz
For the buyer ... this is a cologne not a perfume. It has a extremely strong scent not like the Wind Song body spray. So if you want to be noticed, this product will definitely do it. You don't need to put on much of it; just a little spritz and you're good for the day.
Buy Now

Testimonials for the Prince

What are people still saying about Wind Song Perfume?

Wind song reviews still come in after all these years. So what are they saying?

According to major perfume company websites, customers have written that it is still their favorite perfume. Some have worn it for over 40 years, while it is now catching on with the younger generation.

Their testimonies reflect their loyalty to a product because it not only stayed on their mind, it worked for them. They share fond memories of a loved one or friend who wore the fragrance Wind Song and still comment on how effective it was. It truly is a memorable fragrance and the packaging was and still is just as desirable.

What are you wearing?

To further show how much I believe in this product I'd like to share a true incident with you that happened recently while shopping in a department store.

I was walking past a woman and out into the main aisle of the store when a woman came up to me and asked,

"What perfume are you wearing?"

"You smell great! I'll have to get some of that!" 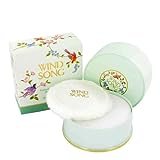 Wind Song Dusting Powder for Women by Prince Matchabelli, 4 Ounce
Wind Song dusting powder is the perfect addition to any cologne you want to use. Immediately after drying off from your shower, pat it on all over the body. Then wear your favorite perfume ... it does not clash with it! Use it alone for a clean fresh fragrance all day. Comes in a pretty plastic container that can be reused after removing the liner.
Buy Now

Would you ever get caught off guard without your favorite scent? - How radical are you about wearing his/her favorite fragrance?

How much do you love your perfume?

Every year my husband buys me his favorite cologne he likes on me... Wind Song.

I can honestly say, I'm never without it. It is on me, so I am still on his mind. What about you? Do you have a passion or obsession about your favorite cologne? FYI since this photo I've sort of added a few more sizes :) You know ... just in case! 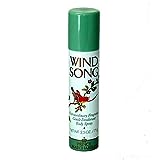 Prince Matchabelli Wind Song Deodorant Body Spray for Women, 2.5 Ounce
Every girl practically wants to carry some kind of perfume or body spray with her while traveling or even on a regular basis. The Wind Song deodorant body spray can easily be slipped into a purse or travel pouch for a quick spritz of refreshing.
Buy Now

How many bottles of your favorite perfume/cologne do you have on hand right now?

Why is it still selling so well?

Because it is still on our mind.

This perfume has stood the test of time. Wind Song users continue to recommend it as a source in their lives daily. It lives up to its motto and truly is as individual as the person wearing it.

Customers love it. Ladies love it and men like it on their ladies. It's that simple and complex at the same time.

Wind Song is sought after from around the globe as the fragrance for today's woman, and that's why it is still a best seller among perfumes and bath powders.

Have you ever used Wind Song products?

Are you really on his mind?

See if it won't keep you on his mind.

Are you a daydreamer?

Do you (or did you) ever daydream about your love interest?

So did the advertising work? - What do you think?

Watch this video of the beginning advertising campaign posters. Then see how my Wind Song romance all came together.

Wind Song Promotional Ad Poster - Own a copy of an original campaign poster.

Prince George sold his perfume company in 1936. Currently the Prince Matchebelli perfume company is owned by the Parfumes de Coeur company who purchased it in 1993. (For more details on the sale of the company please visit the Wikipedia site under his name. Photographs are either mine or royalty free.)

The company has been sold several times over the years, but still remains one of the top selling perfumes and colognes. Wind Song under the Matchabelli name was introduced into the public selling market in 1953. It is described as a blend of floral fragrances with a fruity middle tones. A touch of amber and musk scents are also in there, but frankly I don't smell that at all.

The body spray is light and often used for day, while the cologne for evening wear because it is a much heavier and strong scent.

So as you can see Wind Song has made a big impact on the public, and I suppose it will keep on bringing people together. Thanks for joining me for "that something I just can't live without." Yes, Wind Song "is still on my mind."