Why You Should Check Out Google's Moto G

Another feature regarding the release of the Moto G in India is that it is dual SIM.

You can order it from Flipkart by clicking here.

After being out of the smartphone battle for a long time, Motorola which was bought by Google is now back into the smartphone race with their new low end price ranged phone, but with specs never seen before by a smartphone in the low end range.

The Moto G will be the first smartphone released by Motorola since it was bought by Google to be released in Asia and not just in America and Europe.

The Moto G comes with a 4.5 inch HD screen and a Quad Core processor.

The Moto G comes with an accelerometer,magnetometer, proximity, compass sensors.

Comes with the usual capacitive touchscreen as all the smartphones out there along with a 16M color display. It supports multi-touch and comes with an impressive Corning Gorilla Glass 3 that'l protect your screen from scratches.

It also has an incredible resolution of 720 x 1280 pixels (that's practically full HD), a 4.5 inches screen and a ~326 ppi pixel density for clear crisp image viewing.

It comes with vibration alerts, a clear audible loudspeaker and a 3.5 mm audio jack for your external speakers or earphones.

It's got a Black front panel and 7 different color options for the back panel.

The Moto G is currently being released as a single SIM Android smartphone, but rumors have it that a dual SIM might be released shortly for some countries.

It has all the usual data protocols, that is:

The only disappointing feature I've found about the Moto G is that it doesn't support expanded memory i.e there is no slot for an external memory card. Now, not many of you may find that disappointing, but I prefer the use of a memory card.

The Moto G comes in to variants i.e a 8 GB version and a 16 GB version. Both the variants come with 1 GB of RAM though, that's more than enough for playing all the top and latest games out there on the Play Store without worrying about any lag.

The Moto G comes with an amazing Qualcomm Snapdragon 400 chipset and a Quad-core 1.2 GHz Cortex-A7 processor which for it's price range makes the Moto G a must buy!

All the other smartphones at this price usually offer cheap and low quality chipsets and processors, but the Moto G comes with an amazing and powerful quad core 1.2 GHz processor which makes lagging a thing of the past.

It also has Adreno 305 GPU i.e the graphics card, which makes gaming an amazing experience.

Would you buy the Moto G?

The Moto G comes with a Li-Ion 2070 mAh battery, which is practically as powerful as a tablet battery, which means it should last for over day easily.

The Moto G may come with a 5 MP instead of a 8 MP camera like the other smartphones in it's category but it does have an incredible resolution of 2592х1944 pixels, which promises to give amazing clear and crisp images. 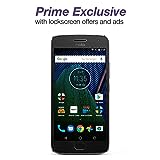 It also comes along with A-GPS support and GLONASS.

It can also run Java by using a Java MIDP emulator.

And as a added plus point Google is giving free storage of 50 GB on Google Drive.

Not to mention the Moto G supports USB OTG which means you can connect your pendrive using a USB converter to access your data and expand your storage on the go.