I've been dabbling with DJ equipment over the years. I wanted to put together a simple guide to picking a decent starter.

DJing probably caught your attention because you love the idea of being at the front-and-center of the party.

You love music so you figured "hey, I could get into this!".

You looked at some DJ equipment but that turned a bit south because the pro stuff was way outside of your budget.

There are actually quite a few pieces of equipment that are easily affordable when you're just getting started with DJing -- like the Hercules DJControl -- just as long as you're looking for the best DJ controller deals.

We're all busy so let's just cut to the chase, yeah?

2. These are light-weight and portable making them ideal for smaller gigs and learning the basics

3. The equipment are tools meaning your music selection and skills will transcend the limits of the hardware

What to Look for in DJ Controllers

DJ controllers at the $100 price point are about as barebones as you're gonna get so don't expect super-flashy features like you'd find in ones hitting the $500+ mark.

It's better to spend a few bucks to explore the basics and feel it out. Rather than feeling burned you just spent a ton of money and DJing isn't your thing. Plus, you may just want to use it for little house parties or small gigs -- instead of trying to headline a major festival.

The main things you're looking for when scoping the best DJ controller deals (outside of price) would include:

A nice bonus with these DJ controllers is that you'll typically find Virtual DJ bundled (usually a stripped down version but one you can play with nonetheless). Virtual DJ is quite easy to get a hang of + you could upgrade at any time for a few bucks.

The DJControl is the cheaper option that still comes with the necessary features.

Numark is the better brand between the two so if you can sport the extra $20 then you're looking at the better deal.

Return policies will come in handy when picking one of these up. Amazon is really good about this so if a DJ controller isn't for you then you can get an easy return.

I recommend spending at least a few days with the controller to feel it out and see if it's something you can get into. Sometimes it comes in the mail and turns out way smaller than you expected. Or, maybe it's just defective -- that's not a good way to start into DJing, yeh?

You get what you pay for.

The lower-end DJ controllers aren't nearly as sturdy as the higher-end models. You also have the issue that the jog wheels are pretty small because of the compact design (which makes it difficult if you have big hands).

A few other downsides include:

Again, you get what you pay for.

An Overview of the Hercules DJ Control (Compact)

The best DJ controller deals come around this time (holidays) where they'll bump down by 20-30%. It's a good time to hop in since it's getting cold and you probably won't be outside as often (I know I hole up during the winter, ha).

If you practiced from this point -- for an hour a day -- you'll quickly have the basics and probably well on your way to the advanced DJing techniques.

You get to play around with DJing without dropping a ton of money. You can get a feel for it without that gut drop you get from spending too much on something you aren't entirely sure you'd be into.

$100 isn't that much to explore a cool hobby like DJing especially if it can take off and make you a few bucks by doing little gigs.

Maybe it'll be something you do professionally.

It's gotta start somewhere so what better way than to do so with spending less than a c-note to get started. 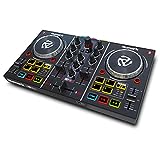 For some, DJing will just sort of *click* and mixing will be a breeze. Others, it's gonna take quite a bit of practice. Either way -- you've got to put in your time and pay your "dues" before you step it up to the big time.

Like I had mentioned: Work on making an awesome set.

The hardware is just a tool. What matters is the quality of your set (song selection, mixing, and just overall vibe you give off).

These DJ controllers will definitely get you there.

What Do You Think About Dj Controllers to Start Djing?