In the early 1990s, no one imagined that the corner of Kinnear and Olentangy River Roads in Columbus, Ohio could become an entertainment, dining and retail complex. Even though it was located less than a mile from The Ohio State University Campus and thousands of students that would love to be able to access such a place, the concept was not yet considered.

The lot available was occupied by an abandoned Lennox air conditioning plant, owned by the large company that makes HVAC equipment and sustainable energy products today. Lennox Industries, Inc. began as the Lennox Furnace Company, founded long ago in 1895 by David Lennox in Iowa. Its headquarters today are located in Richardson, Texas.

When the company closed the Columbus factory in 1994 and moved it to Iowa, the property was fenced off and remained vacant for a time. I remember the closed plant as a large white building with a red-lettered Lennox on the side. The Lennox lot was eventually sold and the history of the location does not appear on the Lennox Industries, Inc. website at all. However, the Lennox Town Center strip mall and the nearby Lennox Flats apartments are dedicated to the old Lennox plant and we have a sales outlet in town.

An old copy of the New York Times reported in a single paragraph that the planned departure of the factory in early 1994 would result in layoffs of 925 employees. At the time, the Job Training Partnership Act was funded by the federal government under Congressional legislation to provide Employment and Training services to laid off workers and others.Thus, the laid off employees of Lennox received additional training and education, if needed, and job placement or job search assistance from one of several nonprofits companies funded locally by the JTPA.

The property site became home to the Lennox Town Center strip mall,anchored by the AMC Lennox 24 Theatres on a major thoroughfare and two bus lines (COTA #82 and #84) connecting with The Ohio State University and the upscale inner suburb of Grandview.

Additional mall tenants are Target, Old Navy, Barnes & Noble, Staples, Famous Footwear, the World Market, a men's clothing store, PetCo, Johnny Rockets casual dining, and Cup 'O Joe's coffee house next to the theater. In the lot are additional restaurants that include Bravo Italian Restaurant and Champs. A Chase ATM machine is located in the lot as well.

Few people recall that a short-lived Westerville AMC began as a Jerry Lewis Cinema. A Jerry Lewis Cinema operated for a few years in Westerville, a northeast suburb of Columbus, along with several across the country anytime from 1969 - 1980. AMC owned the Westerville unit for a short time after the JLC declared bankruptcy as a second-run family movie house, and built several AMC Theatres around Columbus and its surrounding suburbs that currently number over a dozen.

The Westerville film house changed hands several times, becoming the Supersaver, the Glengary Cinema, and today, a Hollywood Cinema. A good theater under any name, it have never been able to compete with the offerings of AMC. The Lennox 24 Theatres are likely the most popular of the AMC movie houses in the city. 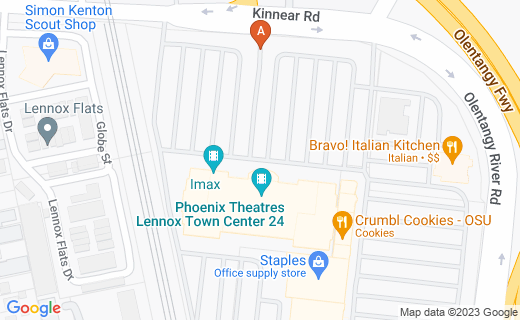 About the Lennox 24 Theatres

I perform a good number of film reviews with a group of local and regional critics at the Lennox 24 Theatres. AMC management schedules advance pre-release screenings for films of all MPAA ratings during several mornings and evenings each week at this theater and usually sees a capacity crowd for each, except in the worst of weather conditions. The site is open seven says a week from approximately 10:00 AM to well past midnight.

This large multiplex maintains Theaters 1-12 to the left and Theaters 13 - 24 to the right, with several equipped for 3D and/or IMAX showings. Theaters 1 and 24 are the largest, holding several hundred viewers. Digital sound is first rate in all theaters and the screen are large and adjustable in size.

Restrooms are large and always clean and well stocked, with paper towels, tissues and even fresh flowers from time to time in the ladies' rooms in each wing of the multiplex.

The Box Office, Reception, and Concessions Area staff are usually very friendly and helpful to customers. Turnover occurs when locally employed college students graduate or transfer to universities away from the area. In many years, I have seen only one case of an unfriendly Box Office attendant, one employed for about two weeks only and who never spoke a word to customers. Occasionally, new Reception Area staff don't have an answer for a question, but they always use their radio equipment to contact someone who does. Occasionally a new employee will just stand and look at you, but this is an infrequent occurrence.

In 2012, the cinema added MacGuffins Bar to the Concessions Area employing bartenders to dispense beer, wine, and mixed drinks to adults. A short bar and a few bar stools are provided.

Other concessions include standard movie foods like candy, popcorn, sodas, hot dogs, and nachos. Additional displays allow customers to choose from a variety of snacks that include packaged cookies, chocolate covered pretzels, trail mix, and other snacks. This AMC experiments with hot drinks as well, finding teas successful and offering different types of coffee drinks from time to time.

Chicken sliders and french fries have been added to the menu and this AMC location would be a great place to add the new AMC full food service menu available from special seats in the theaters of some locations.

In the lobby hallways, the cinema maintains about a dozen video games, a photo booth, and similar kiosks. Each cinema wing contains an additional small concession area for use on the busiest nights at the movies.

Every film I have viewed in this multiplex has included clear sounds and images of high quality. Commercials for upcoming films in a pre-movie First Look presentation offer the same high quality, as do commercials for local and cable TV programs. Public Service Announcements are also sometimes included, and a reminder to maintain quiet during the movie and to note and report suspicious activity in the theater plays before each film begins. This feels like a safe place to enjoy a movie.

Severe weather sometimes interferes with the electrical power in the cinema and management always dispenses free movie passes as the crowds leave. This happens infrequently, usually when a transformer nearby is damaged by heavy winds or other storms.

My Rating for the AMC Lennox 24

The Lennox 24 offers a Movie Goers Card that provides discounts and free times when moviegoers have it punched each time they attend a film showing. Other offerings occur form time to time, and local radio shows offer callers free passes to some pre-release film screenings.

Besides movies, the cinema also presents the Metropolitan Opera on the big screens at affordable prices, movie marathons, midnight premiers, free admission to televised sporting events onscreen like some OSU football games, the Superbowl, UFC fights, and some national special events. Concessions are open for all of these.

On Sundays, the Lennox 24 hosts Rock City Church in Theatre 13 in the front of the building for three services at 9:00 AM, 10:45 AM, and 12:30 PM, with free coffee and soft drinks, free child care, and awesome messages. People are always friendly in these services and smile as they greet you.