CO Poisoning: Protect Yourself with a CO Alarm

Are You at Risk for Carbon Monoxide Poisoning?

Carbon monoxide (CO) is a deadly gas that takes the place of oxygen in the bloodstream and can cause unconsciousness or death. Victims of CO poisoning become drowsy and then lose consciousness. Death is possible if high levels of CO are sustained. CO poisoning can result from operating a gasoline engine in an enclosed space or from faulty operation of a furnace or other gas appliance. I have heard of CO poisoning fatalities from operating a gas grill indoors as a heat source during a power outage.

Since carbon monoxide is colorless and orderless, how can you know if you are being exposed to dangerous levels of CO? The only way to protect yourself is to use a CO detector. Building codes in many areas now require CO detectors to be installed in new construction.

You can purchase a simple CO alarm for about $30. Products are also available that combine a smoke alarm and CO alarm in the same product. 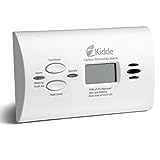 The most commonly used CO detectors use an electrochemical sensor to detect CO levels in the air. This type of CO sensor uses 2 electrodes and an electrolyte such as sulfuric acid. Carbon monoxide is oxidized to carbon dioxide at one electrode and oxygen (O2) is consumed at the other electrode. An electrochemical sensor can accurately measure CO levels in the air and has a useful life of up to 10 years.

Carbon monoxide detectors measure the CO levels and may indicate the measured level of CO using a digital readout or lights/LEDs to indicate the level. Carbon monoxide alarms include a CO detector and have an alarm function that triggers to alert when a dangerous CO level is detected.

CO alarms monitor the CO level as well as the exposure time to trigger the alarm. The intent is for the CO alarm to provide enough warning to allow people to leave an area with high CO concentration before they lose consciousness.

Newly constructed homes often have "wired" CO detectors installed. This means that the CO detectors use the home's A/C power and do not normally rely on battery power. Another advantage of wired CO detectors is that they are connected together and if one sensor detects dangerous CO levels, all of the CO alarms on the house will trigger. This increases the chances that people will hear the alarm and reach safety in time.

Some CO detectors have both wired A/C power and a battery backup, typically a 9V battery. You can also get CO detectors that require only battery power. These detectors are easiest to install since no wiring is required.

What To Do When a CO Alarm Goes Off

If the CO alarm goes off, you should leave the house and call your gas utility or furnace repair service. A professional can come in with a portable CO detector to check the CO levels and identify the source of the CO in your house.

From outside your house, you can check your furnace vent and other vents to make sure they are not blocked. Blocked vents can result in CO build-up.

The most important thing to do when a CO alarm is going off is to make sure to get fresh air from outside frequently until the source of the CO can be identified and resolved.

I recently had a false alarm from a CO detector at my house. My kids were at home while I was out- they called me on my cell phone to report that the alarms were going off. I told them to go outside and wait in the driveway for a few minutes until I could get home to check it out.

When I got home, I couldn't tell if the alarms were sounding due to CO levels or due to smoke. I grabbed a fire extinguisher and went room by room looking for any source of smoke or CO. Everything seemed to be fine. I tried depressing the "hush" button on one of the detectors that I could reach, but it had no effect on the alarm. It sounded like I was at the Chernobyl nuclear plant during the meltdown with all of the alarms going off at once.

I stepped outside for fresh air every few minutes to avoid passing out if there actually was a dangerous level of CO present. I found some earplugs to protect my hearing and continued to investigate. I tried to find a circuit breaker to turn off the alarms, but couldn't find one. I tried turning off the main breaker. The house went dark, but the alarms continued to sound. This is when I learned that my detectors have battery backup...

After checking the vents outside for blockage and finding none, my next move was to call my furnace repairman on my cell phone outside. I was still concerned about CO and was trying to get plenty of fresh air. The repairman arrived with a CO sensor with a readout so he could check the CO levels in parts per million (ppm). He checked several areas and found no elevated levels. He turned up the thermostat so the furnace would run and turned up the temperature control on the hot water heater so it would run. He still found no elevated levels. This was a false alarm.

I again attempted to silence the alarms by pushing the "hush" button on a different detector this time. The alarms stopped after 10 seconds. I found the faulty detector that was generating a false alarm and sending it to all of the other alarms.

The repairman advised that I replace batteries in all 6 of the detectors. When replacing the battery, the faulty detector immediately started alerting when I installed a battery. Apparently the CO sensor had failed in this detector. I ordered a replacement CO detector of the same model on Amazon for $30.

Do You Have a Carbon Monoxide Detector in Your House?

After the situation with a CO false alarm, I decided it would be worthwhile to have a CO detector with a digital readout at home. I wanted a battery powered unit that I could quickly move from one place to another to check CO levels and read the measurement in parts per million.

Another nice thing about having a battery powered CO detector is that it would be handy for taking on travel. The model I picked out has a CO alarm function as well as the CO detection with digital readout. You can carry this portable CO detector with you anywhere you wish to monitor carbon dioxide levels.

I learned a lot about the carbon monoxide detectors in my house during the process of investigating an alarm. Having networked detectors certainly does make it easy to alert everyone in the house when there is an alarm. I didn't even realize that my wired smoke alarm/CO detectors had batteries- since they were wired, I didn't think they needed batteries for power. You can easily unplug the CO detector from the wire harness to access the battery compartment.

I also learned about troubleshooting false alarms. After using a CO detector to make sure there is not a hazardous CO level, you need to try to silence each detector to find the faulty one.

Carbon Monoxide poisoning is common and potentially fatal- certainly not something to take lightly. I would recommend having a CO detector in every house, preferably in every bedroom. You can get simple battery operated CO detectors for as little as $15. 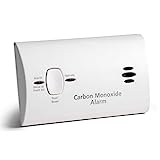