Reduce your Cell Phone Costs with FreedomPop and an iPod Touch

In the last year or two, the cell phone market has changed considerably. It used to be (in the not so distant past) that the only viable option you had for owning a cell phone was to sign up for a 2-year contract through one of the major cell phone carriers, like Verizon, AT&T, and Sprint. If you wanted to change phones or carriers within that 2-year period, steep financial penalties would be assessed.

Over the last few years several smaller players, including TracFone, Boost Mobile, and Virgin Moblle, have entered the market offering no-contract services that free you of the long-term commitments of the larger players. Typically these plans were offered with older generation models of phones and often times were not on the best cellular networks. These have become so popular that all of the bigger carriers are now offering some form a no-contract service.

The Next Generation Low Cost Carrier....FreedomPop

In an attempt to disrupt the cell phone market even more, the new start-up company FreedomPop is offering free and low costs mobile data plans that can be used in conjunction with their Freedom Sleeve Rocket 4G cellular device. FreedomPop is backed by some of the same people that started Skype, another company that disrupted the communication industry through their low cost and free international, local and video calling applications. 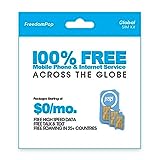 The basis for FreedomPop's services are fairly simple; purchase mobile data wholesale, create a device (in this case the Freedom Sleeve) that allows for delivery of mobile data to the customer and sell the data back to the customer in a package that offers significant value. Currently, FreedomPop relies on the ClearWire 4G network with rumored plans to expand their network using the Sprint network. The service was originall released in October 2012 and is still in its beta phase.

The delivery and pricing scheme is very straightforward - pay $99 for the Freedom Sleeve, hook it to your 4th generation iPod Touch, install a few apps from Apple's app store to gain calling and texting capabilities, and then decided which one of FreedomPop's data plans fits you best.

Currently, FreedomPop offers one of the best deals out there for a cellular mobile data plan - Free use for the first 500 MB of mobile data used. Now, 500 MB of data is not very much mind you, but in my experience of using the device, it is more than enough for the light user that will use it mainly as a phone. FreedomPop also allows you to increase the amount of free data you receive by signing up for optional promotional offers.

Setting up Your Freedom Sleeve Rocket

Setting up the Freedom Sleeve & iPod Touch combined device and converting it into an actual working cellular phone device is relatively easy but does require being comfortable with setting up some apps.

After obtaining both products, set up is pretty simple. The Freedom Sleeve will be pre-packaged with a FreedomPop SSIN network ID code and password for logging into it. For security purposes it is advisable to change either the SSIN, password or both. After the network has been fixed, set up your iPod Touch to automatically detect and sign into the FreedomPop network. Once you have done this you now have a cellular 4G powered iPod Touch that can access the network from anywhere there is coverage.

In order convert the iPod Touch into something that can actually make a receive cellular calls and text messages,a few apps from Apple's app store will have to be downloaded and configured. Configuration is relatively easy, but can take some time depending upon how complicated you wish to make it.

At this point you really have two viable app options for making phone calls with your new Freedom Sleeve/iPod Touch combo device - Skype or Google Voice. Most people are using the Google Voice option combined with a few complementary apps because it is cheaper and generally is more seamless with iOS than Skype is. Nonetheless, some people may want to use Skype which is also a completely viable option. For the remaining part of this hub, I will discuss how to set up the Google Voice method.

After your Google Voice account is set up and the app is installed on your iPod Touch, you will have to sign in and configure it. At this point, the Freedom Sleeve/iPod Touch combo will technically work, but to expand Google Voice's capabilities, it is recommended that you download another app called TalkATone from the app store. This app works with the Google Voice app but provides a better user interface and texting capabilities.

One you have completed the above steps, the device should be ready to go for making and receiving calls and text messages - all for the excellent price of free! There may be some additional tweaks and troubleshooting that needs to be done at this point, but I found that the tweaks are generally pretty easy to fix by searching around on internet forums or contacting FreedomPop's customer service.

For people who use cell phones infrequently and are in a geographic area that is covered by Clearwire's 4G network, the FreedomPop Rocket Sleeve and iPod Touch combination might be the right move. For anyone looking to have robust coverage, with a lot of data and the benefits of traditional cell phone coverage, it may not be the best choice.

How much data do you typically use in a month?