Drilling for Oil versus Growing Hemp for Fuel

Drilling for oil should be a thing of the past. There are many green energy systems that can replace crude oil as a renewable energy system. Growing hemp for fuel seems to be the best green energy system that is available to mankind. The fact that hemp can be grown almost anywhere on earth will solve the geographical ownership systems which are used to influence global divisions. Drilling for oil versus growing hemp for fuel is the number one reason for international conflicts.

Each country or organization will be able to allocate a specific piece of land to be farmed for the growth of hemp. This would mean less independence on foreign fuel markets which can become haphazard at times. It is also important for each country to gain energy independence.

Growing hemp for fuel instead of using crude oil will also help to lessen the environmental damage done by the burning of crude oil. The social implications are also important. Crude oil causes a lot of international conflicts. Instead of another country destroying another country in order to access the oil, they can instead grow hemp for fuel.

An oil drilling venture can easily cost billions of US dollars. However, there is no guarantee that they will strike oil. Drilling for oil is a very risky venture. These ventures often lead to irreversible damages to the environment especially if there is a spillage or explosion. It is also common for oil rig workers to lose their lives while drilling for oil. With these types of risks involved, why would a company prefer drilling for oil versus growing hemp for fuel?

Drilling for oil requires a lot of expensive technical workers. This may include structural engineers, masons, architects, geologist, iron smiths and welders just to name a few. The oil rig has to be designed to meet the geographical characteristics. There are rigs designed for penetrating ocean floors as well as land based rigs. The machineries used are not applicable to other oil drilling ventures, increasing the cost of drilling crude oil.

The oil reserves that are discovered during an oil drilling venture are limited and will not supply oil forever. Crude oil can never be classified as a green energy system or a renewable energy system. The costs that are involved in case there is an oil rig accident should also be factored in. If it is possible for the environment to recover from a spill, it will take years to recover.

The main reason why oil drilling ventures are so risky is because pin pointing oil wells have become a rare event. Even after some oil wells are discovered, the oil yield is low and does not allow the investors to break even.

Growing hemp for fuel only requires land intensive investments. The lands required do not have to be fertile or prime real estate. One reason why hemp is also called weed is because it can adapt to very harsh environmental conditions.

Growing hemp for fuel is also safe for all workers involved. There is no risk of a major fire or meltdown. Come to think of it, the hemp farm does run the risk of being burnt down. However, it is much easier to recover from a hemp catastrophe than to invest millions of dollars to clear up oil spills.

Passive farming is the best words to describe the growth of hemp. There is no need for fertilizer when grown in soils with medium levels of nutrients. Insecticides are not needed, because the plant does not have a lot of insect enemies. Weed control or herbicides are of no use. The hemp will dominate its environment and outlive any other weed competing for soil space. This is true especially when the hemp plants are close together.

Hemp is also a suitable green and renewable energy system. It provides the most continuous feedstock possible by any plant. It grows within a matter of months. Therefore, it is possible to have multiple yields in a single year. This also facilitates the possibility to grow hemp for fuel based on market needs. The price of crude oil will always inflate because it is a scarce commodity. It does not supply energy continuously and it is not renewable. Hemp trees can be planted repeatedly making it the best green energy system.

Video by My Friend, Peace Bud

The emissions from growing hemp for fuel are less and contain much less harsher chemicals. Burning crude releases a lot of impurities into the atmosphere such as sulphur, lead and mercury. There are too many impurities that are by products of crude oil to name. Drilling for oil renders a permanent impact on the environment which is irreversible. The environmental footprint and impact left by drilling is devastating to wildlife.

No More War and Oil Conflicts

The thing about hemp is that it is not confined to a specific geographical location such as oil drilling ventures. Territorial warfare is the end product of dealing in such a valuable commodity as oil. Countries that are privileged to have oil fields will invest large sums of money in order to protect their asset. Large energy consuming countries are looking to manipulate and intimidate the crude oil market.

Oil drilling is an exclusive business, almost a monopoly. This is because of the huge level of investment that is required to enter the business. Growing hemp for fuel on the other hand cannot be monopolized. This is because it can grow almost anywhere, anytime by anyone with minimum investment. Hemp plants are not a scarce resource and can be used to form a reliable green energy system.

Comparing Drilling for Oil versus Growing Hemp for Fuel 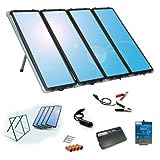 Investing in a Solar Panel System

The Sunforce 60 watt green energy system offered at amazon is a very affordable option in terms of powering a mini-home or supplementing the light bill. It is for those who want evidence that solar panels are the better option without committing a large investment. In another article I prove why The Best Green Energy Systems are Solar Panels...read more.

Why Hemp Fuel is the Best Alternative Energy: For too long now, all nations have become dependent on crude oil when there is a much cheaper alternative. The startup cost for growing hemp for energy is a mere fraction of drilling expeditions and nuclear plants. The economic and environmental benefits will be explored.