Enhancing Your Home Recording Rig With a Hardware Mixer

Looking to expand your simple little home recording get up with a little more functionality? Consider adding a hardware mixer to your musical toolshed. Mixers open up the limited capabilities of most inexpensive computer recording interface devices, and many of them can be obtained for relatively cheap. This article will discuss the merits of hardware mixers, and present a few low-cost options for the frugal minded recording enthusiast.

Keep in mind that we'll be referring to hardware mixers in a home recording context, and this article is designed to cater towards that particular crowd. Mixers are used in a wide variety of audio-centric situations, and several of these (like live audio mixing and audio-video mixing) won't be discussed.

Some food for thought

Home recording is a gradually shrinking craft. Not in user base, mind you, but in actual size. There was once a time when recording engineers needed entire rooms full of equipment in order to capture even the most basic musical set up, and while this is all still very true in a professional environment, home recording equipment for the everyday consumer musician is becoming incredibly portable. I mean, people are now able to bust out decent multi-track recordings on their iPhones--you can't really get greater mobility than that.

It's tempting to give into all of this newfangled micro-recording gear that's been made available. Smaller recording equipment means heightened convenience, and this heightened convenience translates to (typically) easier functionality. The basic laptop/recording interface set-up allows virtually unlimited recording potential for practically anyone with a little technical know-how, and it's a fantastic way to lay down some decent tracks without resorting to expensive studio time.

Amid all of this accessibility, though, sacrifices must be made. Most inexpensive computer recording interfaces only allow for the recording of one or two simultaneous tracks, therefore making full band recordings a rather cumbersome process. It doesn't get any better for audiophiles either--cheap DAW software almost always has sound mixing options, but we live in an age where the "pre-set" is king, and those little tweaks of perfection are usually designated after the fact. One-click, hassle free recording is great and all, but it's a very limited way of doing things, and even the most basic home recording rig can become potentially limitless with the addition of one more piece of equipment: a hardware mixer.

Why should you consider a hardware mixer?

Before I attempt to convince you that a hardware mixer is the only way to go (it's not, but bear with me, dear reader), let's define the art of "mixing" first.

"Mixing" happens when audio signals are processed and combined together, and the resulting "mixed" audio is an solid cohesive output. Separate pieces of audio go in, gets mixed together, a combined audio signal comes out. It really is that simple, and it's kind of like making guacamole. You get some avocados, throw in a chopped onion, throw in a chili pepper, add a little lime juice, mix it all up and...BAM! Just like preparing guacamole, mixed audio can be altered to change the resulting output. You want to make the guacamole spicier? Throw in a little extra chili pepper. You want the vocals to stand out in a mixed audio track? Adjust the equalization and turn up the vocal track. Is the guacamole too spicy now? Add some more avocado to mellow it out. Is the kick drum too loud in the mixed audio file? Turn down volume on the kick drum. It's a relatively crude comparison, but you get the idea.

You may be thinking, I can do all of this mixing in a DAW, so why do I need a hardware mixer? Guess what? You're assumptions are correct--most DAW's do have mixing functionality built into the software, and therefore you don't necessarily need a hardware solution. It's certainly nice to have one, but hardware mixers present several advantages that give them rise above mere convenience.

What to look for in a hardware mixer

I have thus far written several articles discussing the varying facets of home recording equipment, and find myself repeating a variation of this basic philosophy: you get what you pay for. Telling you that it's no different with hardware mixers is redundant, so I won't be spending too much time dwelling on the concept. It's nice to point out, though, that while lower prices usually correlate with decreased functionality, many home recording rigs simply don't need all the bells and whistles associated with premium, studio-quality devices, and even the most basic (read: cheapest) hardware mixer will be able to open up the possibilities of a standard living room/bedroom/basement/bathroom (just kidding) computer recording arrangement. Here are some things to consider before buying a mixer.

There are several other aspects regarding hardware mixers that haven't been discussed here, and they have only been excluded for the sake of article length and overall simplicity. If you really want to learn more about hardware mixing intricacies, a slew of free online resources are available at your immediate disposal. Sweetwater music has a pretty decent guide to mixers, which you can access by clicking here.

If you're already on a budget, I know what you're thinking: wow, one more thing to buy. This sucks, dude! While you technically don't need to throw a mixer on top of your already crowded recording rig, it's a great way to spice up your possibilites, and several low-cost entries are available for the penny-pinchers among us.

The units presented below are for informational purposes only, and I am in no way affiliated with the manufacturers of these various mixers. Always do your homework before finalizing a purchase, and remember--user reviews exist in your favor. Read what other people who already purchased one of these guys have to say. Let them be your guinea pigs!

Behringer Xenyx Line Up
Behringer branded equipment is typically known for their low prices, and though often shunned by the rich kids who can afford to splurge on the best of the best, Behringer products are invaluable for home recording on a tight budget. Their latest foray into budget mixing equipment rests in the hands of their Xenyx brand, which highlight the inclusion of their proprietary Xenyx preamp capabilities. Their prices rise with added bell and whistles.

On the lower end of the spectrum, we have the 502 5-channel mixer. This little guy has a single XLR input, 4 1/4" inputs, knob-style volume controls and the Xenyx mic preamp Behringer is so proud of. This may be a great addition for compact setups, but aside from the preamp, may not offer enough to warrant a purchase for home recording engineers that get similar functionality out of their recording interface. 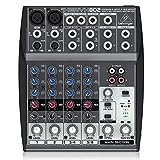 For a little more moolah, the 802 may be a better fit for home recording set-ups, as it features eight inputs, two of which are XLR. It also has three equalizer controls and a 2-bus routing system. It's bigger than the 502, but the 802 still pretty compact, and the modest price difference adds significant functionality that it's younger sibling sorely lacks. For smaller home recording rigs, it's definitely the most recommended Xenyx-branded hardware mixer. 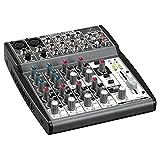 The Xenyx 1002 spices it all up with 10 mixable channels, two of which are XLR. The added input functionality may not be a necessity for basic home recording situations, but for less than $100, it's hard to argue about too much of a good thing. Though internally similar to the 502 and 802, the 1002 adds a gloriously vertical master fader control, which is so much better than the little knobs present on its smaller counterparts.

Peavey PV6
The PV6 is a six channel mixer that doesn't have any bells and whistles that make it particularly interesting on a superficial front (despite looking like a toy, but that's just my impression), but it does have four dedicated XLR microphone inputs, which is pretty awesome for such a low price tag. It also includes Reaper DAW software, but I'm not sure if it's the free trial version that anyone can download or a licensed version. For a little bit extra cash money, Peavey also offers a version of their PV6 mixer with USB output options, which may pose interesting for persons without existing computer recording interface hardware.

Mackie 402-VLZ3
Remember how I brought up that whole "you get what you pay for" argument? You know, the one I didn't really expand on since it's so obvious? Well, that's a problem with these budget mixers, and while they sound great for their low prices, corners are usually cut with overall build quality. On the other hand, though, while almost every other budget mixer under $150 is going to be made of flimsy plastic material, the 402-VLZ3 is built inside a rugged metal chasis, so you get a totally road-worthy bang for your buck. The 402-VLZ3 features 4 channels, two XLR inputs, and a whole lotta heft in its compact packaging. 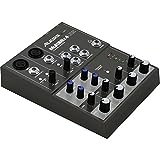 Alesis MultiMix USB Line Up
Mixers with a USB output may not really strike the fancy of anyone who already has a trusty recording interface that they've become quite smitten towards, but in the interest of tight budgets, the integration between mixer and recording interface may be a great option. Alesis offers two of these in the sub $150 price range, a 4-channel option and an 8-channel option. The MultiMix 4 features two XLR inputs and a cute little cuboid design, and the MultiMix 8 offers four XLR inputs, a slew of additional controls to let users tweak their hearts away, several onboard effects and a more "industry friendly" design. The 8 is double the price of the 4, but again, (say it with me) "you get what you pay for," and for less than $150, you actually get quite a bit.