Trouble recieving digital channels on your TV after the DTV Conversion?

The US government mandated transition of analog television signals to digital television signals is behind us. Unfortunately the problems caused by the transition are not. If you live in a rural or suburban area chances are you do not have good TV reception. If your reception is good chances are you no longer receive all of the channels that you did previously. We were all told that a digital converter box would do the trick - but guess what – it may be more complicated than that.

Those of us that subscribe to either cable or satellite television services are barely noticing the difference. The afternoon of June 12th, 2009 one of my cable channels was having difficulty. Apparently the aspect ratio was incorrect because first we had a letter box screen, then we had black lines on the sides of the screen and then the picture would return to letter box. However, by that evening the problem was resolved.

The same could not be said for my mother’s HDTV (not connected to cable). Each time it was rescanned some channels were gained while others were lost. Some channels that could be received came and went. Her analog TV – attached to a converter box acted much the same way.

After researching antennas both online and in the big box stores I found one that looks promising. The Terk Omni Directional Amplified Indoor Antenna is not only good looking - it reportedly receives approximately 90 percent of available channels (even in rural and suburban areas). I know what you are thinking – “I want one that receives 100 percent of the available stations”! The next best average for other indoor antennas is 70 percent. There is no complete report on these statistics that I can find but the Terk was the winner of the 2009 CES Innovations Design and Engineering award.

The Omni Directional Amplified Indoor Antenna is both UHF and VHF. It has low-noise filtering. It is versatile as well as great looking. It is shaped much like a small computer monitor – measuring 11.5 inches high, 10.25 inches wide, and barely over 1 inch thick. Hang it on the wall, stand it on a shelf or lay it flat – it is OK. Omni directional means that it does not have to be pointed in any particular direction.

It may take a while for all channels to be at full power. That is the reason for poor reception is many areas because the digital signal is weak and most antennas will have trouble picking them up. Some channels may never get any stronger so an amplified indoor antenna will most likely give you the best results. Results may vary from one room to another or even from one side of the room to the other so it is important to remember that it may take time and experimenting to find the sweet spot.

The Terk Omni Directional Amplified Indoor Antenna can only be used with an HDTV. 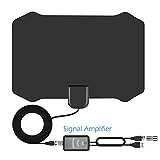