After taking a second look at some of my photos I am surprised at my own success on eBay. I posed my items as well as I knew how, but looking back I see that my photos left a lot to be desired. Sometimes I would shoot twenty or thirty photos of an item (at angle possible) trying to get the lighting just right. Shadows were always a huge problem. I avoided white backgrounds because I understood just enough about white balance to know that the camera would pick up on the background and leave my subject dark with little discernable detail.

Selling products on eBay or any other online auction site can be a fantastic way to increase overall income. Every year millions of dollars is spent searching for the secret to online auction success but trial and error is the way most people learn what works best.

Photos rank high on the list of things that have to be done right. Even if you are the most talented writer on earth a photo will say much more than you can. The more information provided to the buyer, the more enticed they will be to place a bid. They will depend on their eyes to replace the tactile information that would otherwise be gathered from actually touching the item. 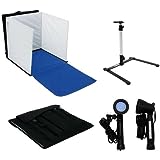 Many of my sales on eBay were Computer Software. The glare was extreme when the packaging was the least bit shiny. I had the same problem with any smooth shiny surface. That was not the only problem I had - one shot that I never got right was the inside of a bag.

I did not know about light boxes. Sometimes I see them called studio boxes, tabletop light studios, portable studios or mini photo studios. As I knock myself up-side my head it becomes obvious. Defuse the light. Harsh light puts harsh glare on the photograph. Change the direction of the light or flood a more even light over the item and the camera will pick up the overall detail without heavy shadows.

Some portable light studio boxes are sold complete with two lights, diffusers, colorful backgrounds and camera tripods. Others are sold with fewer pieces but the idea is the same. The box is set on a table (or other surface), a background is placed inside of it and the item is placed onto the background. Lights are aimed either through the box or into the box. The sides of the box become a diffuser. If lights are pointed to the inside of the box external diffusers are used to force the light to specific areas of the item. Trial and error will eventually provide the desired results.

Portable light studio boxes can be purchased or they can be constructed from items that you may already have. Either way, I now see that they are necessary.