Ever increasing interest in solar power

Developers and manufacturers of portable solar products have been expanding their product range in response to the market demands. This increased availability of a variety of plug and play solar power generators has made it much more affordable and accessible for us to use solar energy.

The scope of use for these portable solar generators has expanded. Solar power has been able to replace the traditional diesel generators in areas where noise and air pollution restrictions no longer allow the use of diesel generators.

For camping and travel, the availability of small suitcase style portable solar generators for recreational vehicles and boats continues to increase. Even smaller portable units on backpacks, handbags, hats and other options allow us to charge our ever growing collection of rechargeable devises.

Portable solar devices can be very helpful in emergencies. Power outages caused by storms and grid failures seem to be increasing every year.

As our non-renewable resources continue to decline and have negative impacts on our environment, it has become increasingly important for us to move towards clean and renewable energy sources. Sunlight provides us with a consistent and steady source of solar power each day. Solar energy not only benefits individual owners, it is good for the environment. Solar panels, even with no moving parts, manage to generate copious amounts of electricity from simple sunlight.

It is within the abilities of almost anyone to build a functioning solar panel. 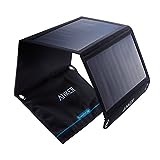 Once the two sides are mated, electrons from the negative side rush to fill the holes on the positive side, and very quickly there is a great gathering of electrons along the positive side of the border, otherwise known as the positive-negative junction. At this point however there is still no net electric charge, there are exactly as many electrons in the solar cell as there are holes, even though many of the electrons and holes have traded places.

This is where sunlight comes in. When a photon of light hits an electron on the positive side of the positive-negative junction, it imbues it with enough energy to push it back over to the negative side, where it is quickly whisked away by one of the conducting channels running through the silicon matrix and sent off to work.

The electrons mass exodus produces an electric charge in the solar cell of around 0.5 volts, and will continue to do so as long as the sun shines and the positive side is replenished with the electrons.