Plasma Vs. LCD - Which of These HDTV Televisions Would You Pick?

If you have been planning to buy an HDTV you will probably find these two types of televisions sets in stores. There is a lot of debate as to which of them is better. The truth is, each one of them has its advantages and disadvantages. Here are some of the pros and cons of the two leading types of HDTV televisions to help you decide which one is appropriate for you.

The Pros And Cons of Plasma HDTV Televisions

The pros of Plasma HDTVs

Plasma HDTVs have the best image quality. If you take a close look at the colors displayed by them you will notice that they are very solid and warm. What makes colors displayed on a Plasma set so attractive is that they are very similar to the colors that are displayed on CRT (Cathode Ray Tube) television sets. The sets all of us grew watching TV on. CRT sets are those big sets that are still around in some homes. The ones that had the rounded non flat screen. They are sometimes referred to as tube televisions. Due to the many years of using CRTs our eyes have adapted to these warm colors to a point that some people that buy an LCD or a DLP set dislike the product they purchased because to them, images look bland and artificial. A small number of people even return their set back to the store to get a Plasma screen. This situation is not very common but, I have seen it happen and have read about it a few times before. Another reason why images in Plasma sets look very realistic is that they can display very dark blacks.

The importance of a set's ability to display dark blacks relies on the fact that blacks are responsible for depth perception on images and color contrast. The truth is that the darkest black came from tube televisions. Still, Plasma HDTV televisions are the closest you can get to a CRT. Refresh rates are also very fast on these sets which makes them really good when it comes to fast moving scenes. They have a very wide viewing angle which makes the perfect to watch movies with the whole family.

Plasma HD television sets need a lot of energy to operate. If you are worried about your electric bill, one of these television sets is not for you especially if you are planning to buy one with a big screen. They are also relatively heavy compared to other types of TVs and are not as easy to mount on a wall due to the fact that they are thicker that other flat screens. Plasma screens are made of glass which can be quite bothersome for those that like to watch Tv during the day. The reason is that glass surfaces reflect a lot of light. The same happens with TVs with glass screens. If there is too much light in the room expect reflections of light bulbs or windows on the screen. Practically, the same thing that happened with CRTs. Notice the similarities?

And of course, the usual consumer concern known as the dreaded burn in. Image burn in occurs when some of the phosphor that powers pixels inside a Plasma set or a CRT ages considerably compared to some of the other phosphor in other areas of the screen. Burn in can happen when a static image is projected for extended periods of time. With never sets, the probability of an image burning in has been greatly reduced. Do you have an old CRT television that suffers from image burn in? Probably not, so do not fear image burn with your Plasma set either. It can happen especially with very old models but, most newer sets have a lot of features to help protect the screen from such damage. Be sure to use them when necessary if you buy one of these.

Another problem is that as Plasma televisions age they lose brightness due to the same reason: phosphor doesn't last forever. But do not get to concerned. Most newer models are designed to last up to 17 years of normal viewing activity. They have almost the same lifespan as other HDTV televisions.

The Pros and Cons Of LCD HDTV Televisions

The pros of LCD HDTVs

LCD HDTVs come in all sizes unlike Plasma televisions where most sets are usually big. They display very very bright colors. The colors on LCD HDTVs usually do not fade over time since this technology is not phosphor based like Plasma and CRT technology. Colors usually remain in like new condition during the life of the set. An LCD screen usually looks like new even after many years on continued use. These sets are very slim and weight a lot less than a Plasma set of the same size. Due to their light weight and their "slimness " a lot of people like mounting them on walls to free up room space. Not to mention, that they look great when mounted on walls. Many people are attracted to the fact that they are not prone to image burn in like other sets are, especially gamers. LCD televisions are perfect for playing video games since they are not affected by the static images on video games.

Another reason why a lot of people like them is because they do not have the serious reflection problems that Plasma HDTV televisions have since in the majority of models, the outer screen is not made of thick glass. This is the reason why they perform great in lighted rooms. These televisions do not require as much energy to work and run relatively cool compared to Plasma sets. If you play video games or perhaps you plan to use your set in a very lighted room or mostly during the day then this is the perfect screen type for you.

All display technologies have their pros and cons. The problems that LCD HDTV televisions face tend to be more related to image quality. With these televisions the quality of the model will affect greatly the overall experience. One of the problems that they have is that the blacks that are displayed by them are not the best. Like mentioned before, black colors are important when it comes to depth perception and the overall solidness or should I say, how real the image looks like compared to the real world. The lesser quality the TV, the less contrast and the more artificial and flat the image looks. In very dark rooms the problem with black colors is more noticeable. This is why it is recommended to avoid using them in vary dark rooms.

Slow refresh rates have also been a problem for many years. Which has lead manufacturers to develop screens with faster refresh rates including 120Hz capable screens. Screens with 120Hz refresh rates help eliminate the tracers (some times called ghosting) that appear in fast moving images on a screen with a slow refresh rate. 120Hz refresh rates also create a problem that not all people seem to mind but, others find extremely annoying. This problem is referred to as "the soap opera effect" by some online communities. The soap opera effect is difficult to explain in words but in general, the idea is that movement looks exaggerated or extremely fluid to a point that it looks unreal.

Most LCD HDTV televisions do not have a wide viewing angle. If you sit at extreme angles you will notice that colors can become darker or brighter than they are supposed to. Be sure to sit as centered to the set as possible. 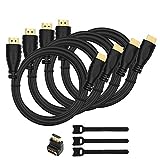 Do you own an HDTV set? Which type of screen does it have?