LED lights are great energy savers. The light is bright yet the cost to burn them is quite low. Decorating indoors and outdoors has never been easier and you can do so without feeling guilty. Halloween decorations can be accentuated with orange landscape lights and strings of LED skull lights add that eerie feeling as someone steps onto the porch.

In comparison to the standard incandescent bulbs used in the past an LED light can last up to 20X longer. As long as the strings of LED lights are treated with reasonable care they may not have to be replaced for many years.

How Much can be Saved by burning LED lights?

Again, in comparison to the standard bulbs used in the past an LED light can use up to 88 percent less energy. This results in being able to burn the lights for many more hours while spending much less money than ever before.

How Many LED Light Strings can be Attached End-TO-End?

Multiple strings of LED Lights can be attached end-to-end – typically between 50 and 100 strings. Is that safe? Yes, LED lights draw low voltage and burn cool. The advantage of attaching so many strings together is that fewer outlets are needed. How many outlets do you have on the outside of your house? I have one outlet on my porch. Needless to say, I have been limited to just a few standard strings of lights.

What Style of Halloween LED Light Strings are Available?

That is a difficult question to answer. Since there is no way to describe them all I have chosen my favorites here.

The Frosted Purple and Frosted Orange LED Halloween Lights – These can be used indoors and outdoors, bulbs can be changed and the string is 25 feet long. Connect up to 80 Strings end-to-end and expect them to last approximately 50,000 hours.

The Icicle LED String Lights – Orange – These can be used indoors or outdoors, comes with two extra bulbs and each string measures approximately 9 feet. Multiple strings can be attached end-to-end.

The Good Tidings Halloween Pumpkin LED Light Set – Can be used indoors and outdoors, each string measures approximately 24 feet, and up to 20 LED light strings can be attached together end-to-end.

All of these light strings are cute and would go a long way towards creating a decorative Halloween scene. They are a great way to have fun while saving money and energy. 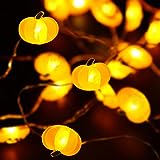