Here Comes Everybody: Clay Shirky's take on social networks and their impact 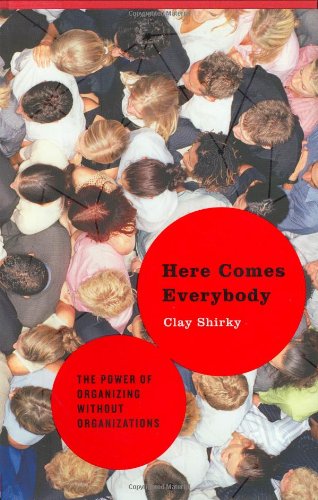 Clay Shirky is a profound thinker. For many years, his writings have greatly influenced the thinking of many technology leaders. I first heard about Shirky's writings in 2004 when Joe Kraus, the former CEO of Excite, pointed me to his website at a conference. Since then, I've been a fan.

It was with real excitement and anticipation that I purchased his latest book: Here Comes Everybody. I found it to be a very compelling read. Shirky prefers to stay grounded on real-world examples. As he analyzes the dimensions of web-based social networking, he stays focused on news stories and examples using popular web sites.

His book begins with the story of a stolen cell phone... Surprisingly, the incident becomes an internet detective story where the culprits are tracked down and the NYPD is pressured into action against the teenager who refused to give the phone back. All this occurs because the boyfriend of the woman who lost her phone refuses to give up and attracts high web traffic on his web postings about the incident.

Shirky uses these types of stories to analyze the forces that are changing society as the result of the new opportunities for amateurs to create content on the web. Throughout the discussion, Shirky stays focused on the reasons why these trends are having so much impact at this time.

In Chapter two, he talks about the birthday paradox. In a line of 35 people, a person wants to bet you $50 that no two people will share the same birthday. Should you take the bet? The answer to this question has a lot to tell us about the degrees of separation between people in general and the dynamics of virtual, online communities. This has important implications for group-managed web sites such as Wikipedia.

Why, after all, does Wikipedia work? Why does an encyclopedia where anyone can submit content have such a high quality of content. Shirky's analysis of Wikipedia, in my view, is masterful.

One of the main themes of the book is the trend of mass amateurization. This is the idea that there is no longer a business body that owns the entranceway to mass distribution of images, art, information, opinions, and video. Whereas, before, a manuscript needed to get approval by a publisher or a news story needs to get picked up by a major newspaper, now everything is different: anyone anywhere can post content to a potential mass audience.

This trend is analogous to what happened to scribes with Gutenberg's invention of the printing press. With this important change, books could be mass produced. The professional class of scribes were no longer needed. The lesson: when great effort is required and resources are limited, it is natural for a professional class to rise up. When technology greatly reduces the barriers to entry, the rate of production and the diversity of production can be greatly increased.

In the case of the internet, anyone, regardless of skill, can produce content. What arises to a large extent is the mass publication of what would otherwise be private voices. If you go to web sites such as MySpace or take a blog at random, it is clear that most of these authors are appealing to very small audiences. Even though the access is public, the target is really private.  What seems clear is that like the professional scribes before, the old-style media will need to radically change and this change is already occurring.

Shirky also does a great job covering what has become known as the "power rule" of the internet.  This is the trend that 20% of the people will attract 80% of the traffic and further, that 80% of the user-generated content for any given site will come from a highly productive 20%.  Shirky goes into good detail about these dimensions of the power rule which are as important to the internet as the bell curve is to statistics.

In the last third of the book, Shirky analyzes the sociology of the online communities that are forming and the foundations of its dynamics. He talks about how Meetup.com is enabling new groups to organize and socialize. He talks about the flash mobs that have organized in Belarus and drove the failed candidacy of Howard Dean.

He presents the ideas of bridging captial and bonding capital. Bridging capital is the range of people that you connect with. Bonding capital is the depth of those relationships. He shows how the new dynamics of the web are leading to some groups being very successful at organizing while the majority of groups that start will just plain fail. But that is the beauty of the new changes that are upon us. By allowing lower levels of effort to have greater impact and by reducing the price of failure, we are in fact increasing the quantity and quality of those efforts that succeed.

I was very impressed by the high quality of thought that is contained in this book. For me, this is an instant classic.

If you want to understand where the internet is going and how it is impacting society, read this book.

Here Comes Everybody: The Power of Organizing Without Organizations
Buy Now