How I Recovered From Antivirus Live Malware

Amelia has over 25 yrs of experience in the IT, Training and Education, and eLearning industry. She is also an author of over 14 books.

Yesterday, I had a bad experience with malware on my computer. A strange screen displayed and said my computer was infected with spyware and that my files were corrupted. I suspected that it might be a hoax because I had seen similar types of screens before that pop up and warn you that your system must be scanned immediately. I figured all I had to do was close the window or terminate the task and that would be the end of it. But little pop-up messages kept appearing in the middle of my screen, telling me that different files were corrupted.

The Antivirus Live ad screen that I kept closing kept launching again. I wasn’t nervous yet, just annoyed. I noticed the name of the suspicious program was Antivirus Live, so I opened another browser window and looked up the name. I didn’t like what I found. Several websites like spyware.com said it was a fake and very deceitful anti-spyware program, one that installs on your computer without your permission. The program was very aggressive and continually displayed the fake popup messages saying files are corrupted and at the same time, it terminated almost every program I tried to launch.

Example of a Fake Warning Message

The Realization That My Computer Was Hijacked

After years of running antivirus updates, backing up my files and trying to keep up with the latest techniques on how to keep your computer virus-free, I began to realize what was happening…my computer was hijacked! So I asked myself, how can this happen?

Lately I had been doing a lot of research and visiting a lot of different computer websites, some of which had a lot of advertising. You never know what site is safe. I later learning about using http://safeweb.norton.com/ to check sites you visit to makes sure they are safe and virus-free.

How I Tried to Fix It Myself

I felt brave and thought I might be able to fix this myself. So for a couple hours, I followed directions which I had found and compared from a few websites (http://www.2-spyware.com/remove-antivirus-live.html and http://www.bleepingcomputer.com/virus-removal/remove-antivirus-live) on how to remove the infection. But I quickly became frustrated when everything I tried didn’t work and the infection terminated every program that I tried to run.

Some suggestions in the fixes I found suggested terminating the process in the task manager after hitting CTRL+ALT+DEL. But the virus blocked me from getting to the task manager no matter how I tried. I even tried to type taskmgr.exe in Start, Run, but it blocked that too. After rebooting, the Antivirus Live program would launch as soon as Windows started. I also noticed the icon of the malware program in the icon tray at the bottom of the screen.

My Norton Antivirus was overdue to be upgraded, so I thought now might be a good time. I also knew that my antivirus updates were probably not current , so I decided now was a critical time to update it. I thought maybe a full scan would fix the problem. However, the malware infection continued to interfere with the install of the new version of Norton. At that point my hands were tied. I needed this fixed as soon as possible and I didn’t want to take my computer to a store and hand it over to someone to fix which would take more time.

I opted to click on the NortonLive help link to chat with a live operator. They reviewed some options, including a Spyware and Virus Removal Service which can be done remotely. I liked that idea because then I could watch what they were doing and save time. Yes, it did cost money, but it was an emergency and I needed it fixed right away, so I went ahead and ordered the service.

After several safe mode reboots and 3 Norton technicians later, they cleaned my computer and removed the malware. It took about 1 ½ to 2 hrs. for them to remote control and fix the problem. Norton technicians must have a checklist which they follow. I watched as the usual cleaning was done, cleaning temp files, cookies and internet history, but there was also a special removal tool that was used, modifications made to the system32 folder and other detailed cleanup performed. I don’t think I would have known specifically all the things to check for, so I’m glad I used their services and I would give them a five star rating since they were able to resolve fairly quickly.

What Did I Learn?

Well, from now on, I don’t procrastinate and wait until something happens before I update my anti-virus program. Is Norton the best choice for resolving these problems? It's only one of many programs you can use. In this case, it worked out well. However, I know there are many different anti-virus programs and virus removal services that make work just as well, and some are cheaper, or just plain free. Sometimes you just have to go with your gut, and do what you know is best. It's also best to read reviews and compare programs and their features. In my case, since I was pressed for time, I needed help fast. So sometimes there is no time to explore a lot of options. Like everything else, it also depends on how much money you want to spend along with how much time you have. 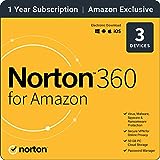 Norton 360 for Amazon, 2023 Ready, Antivirus software for up to 3 Devices with Auto Renewal
Buy Now