How To Recharge Alkaline Batteries Safely

Why Not Reuse Your Alkaline Batteries?

Most people simply throw away alkaline batteries such as those made by Duracell and Energizer when they are depleted. Did you know that you can safely recharge alkaline batteries up to seventy times or more? This little known secret has been intentionally kept from the public by battery makers who want to sell you more and more batteries. Imagine how it would hurt their profits if they sold 70 times fewer batteries? It would be like Exxon selling special gasoline that caused cars to get 700 miles per gallon.

It is important to note that only a special kind of device will recharge Energizer, Duracell and other alkaline batteries. Regular chargers made for NiCD or NiMH batteries will cause damage to alkaline batteries because the voltage and charge rate are all wrong.

Products like the ReNu-It alkaline battery charger have a special regulator circuit that cycles the DC voltage being fed into the battery to return it to more than 95% of new condition. If you calculate the cost of a pack of eight Energizer AA batteries at around $6.00 you can save around $420 dollars or more with an alkaline battery charger. If you have a lot of electronic devices and toys you can save a lot of cash with one of these chargers. It's just that the big battery makers don't want you to find this out.

Alkaline battery chargers come in several brands and styles. If you use more of a certain kind of battery, such as AA, you should get the charger that allows you to charge as many of these alkaline batteries as possible. These chargers are safe to use and have been around for over a decade now. However, you must inspect batteries for any signs of leakage before recharging them. If a battery is very hot to the touch after placing it in the charger for a few minutes you should throw it away. Alkaline battery chargers have a shut off circuit that will prevent damage to the unit or fire. Some models will charge all three types of batteries, including alkaline, NiMh and NiCD. It is important to remember than regular rechargeable battery chargers will not charge alkaline batteries. It would be dangerous to try to do so.

In order to get the maximum number of charges from a disposable battery it is important that you don't drain it all the way down. Unlike NiCD batteries you should remove and charge alkaline disposable batteries as soon as you see their life begin to fade. For example, when the toy starts to slow down, or flashlight begin to get dim, take out the battery and place it on the charger. If you have several sets ready to go then you can just pop in the freshly charged battery and keep going. It's not that hard to do, you just want to remember to not fully drain them. Once you get your new charger and start using it, write the date when you bought your batteries on the side of them. This will give you an idea of just how much money you are saving. I place a small mark with a Sharpie pen on the side of them. Some of my alkaline batteries have so many marks I find it hard to find room for another one. I've also found that the higher end brands can be recharged more times than cheap ones. As for cheap alkaline batteries I have had good luck with those from CVS Pharmacy.

If the battery shows any signs of leakage, such as bubbling or discoloration, do not attempt to recharge it. Also, it you notice one battery getting hotter than others during the recharge process, throw it away. In most cases you will have no problems recharging alkaline Energizer, EverReady and other brands.

Another Advantage of Recharging Alkaline Batteries

Another big advantage of recharging Duracell and other alkaline cells is that they don't have to be disposed of as hazardous waste. NiCD batteries are very harmful to the environment and have largely been phased out. NiMH are less harmful but can leach nickel into groundwater.

Alkaline battery chargers are a very green product. It's a shame that battery makers don't want us to know about them. I've been using one for over two years now and in that time I estimate that I have saved at least $400 in battery costs. You can find these chargers from time to time at home improvement and hardware stores an on late night infomercials. They are also for sale on Amazon and eBay. Below are some of the different kinds of alkaline battery chargers. The Viatek RE02G has the highest customer satisfaction rating, with four stars and can recharge most disposable batteries in 2.5 to 7 hours. 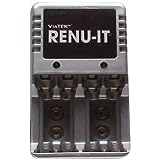