How to Protect Your Android Cell Phone or Tablet

As with computers, the operating systems of Android cell phones and tablets can be hacked under your nose when you import and install programs. Your personal information can also be compromised. The Android operating system is certainly not immune to these types of intrusions. There are over a dozen different ways that rogue android applications can cause problems.

In this article, I go over things you should notice and steps that you can take to prevent yourself from having problems. I also discuss the usefulness of antivirus and malware prevention programs for andoid operating systems. Lastly, there is a video and discussion of anti-theft applications like Cerberus. All of these measures will show you how to protect your valuable Android cell phone or tablet.

These are some basic principles of going about using your phone, downloading apps and observing application behavior that will decrease the likelihood of infections or having your personal information compromised:

1. Avoid downloading any application that has less than a thousand downloads. Also check the ratings of users to verify the usefulness and validity of the program. Correspondingly, it is important for you to participate in application ratings for the better good of the android community.

2. Everyone probably knows by now that there are two reliable vendors of android applications, the Google Play Store and Amazon Appstore for Android. Use these sources for downloads of programs as they regularly check for malware. This doesn't mean that there is a possibility of bad apps still being on their site, as recent history attests. But it does mean that the probability of loading apps containing malware is less. Note that Android phones can also be set to prevent downloading from unknown, or unmoderated, web sites.

3. Don't just download apps randomly because they are cheap or free. Check out the reviews of the apps online to see if they have features and functionality that you want. Reviewed programs are a safer bet for your device.

4. Sometimes you can come across apps that may have a little different spelling than the specific app you are looking for. Avoid these apps, as it has been observed that a high percentage of them are malware.

5. When installing an application, observe whether the program requests for permissions that it normally would not need, like sending SMS messages or having access to your system, wifi or your network. Don't install programs that request for services that you deem as not essential to the application on your device. 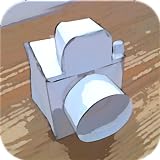 Paper Camera
Find the creative angle of your photographs that you take.
Buy Now

Back in November of 2011, it was found that many of the applications that are in the market don't cut the mustard for protection of your cell phone. Another study by AV Test was published in March of 2012 that shows improvement in that regard. The study compared the different applications with more than 20 different tests that cover the range of threat-types. The results indicated that experienced organizations in computer IT do have available programs that help protect against 90% of the threats that exist at the moment.

Free Apps to Consider. What is really great about this is that some of these programs at the top of the list for protection ability, are also free. The top free programs in avast's analysis (referenced below) include: avast! Free Mobile Security, Dr. Web Antivirus Light, Lookout Mobile Security and IKARUS mobile.security LITE.

A paid program at the top of the list is Kaspersky Mobile Security. In early Februrary of 2013, Kaspersky discovered a Google Play app called DroidCleaner that was hiding as a "cleaner," but it did all kinds of harm - like deleting SMS messages, uploading data, contacts and photos from the phone's SD card and enabling WiFi to carry out its activities. Don't download Superclean either, they were submitted by the same Russian developer. Kaspersky seems to be on game better than Google Play!

The Value-Added Aspect of Paid Applications

Paid applications add extra value over the free "light" programs. A premium feature for stolen phones includes notification if the SIM chip has been changed (Kaspersky and Dr. Web), but this feature is also found in the Anti Droid Theft free application which I will talk about more below. All of the top premium programs can do:

F-Secure includes an automatic backup of call and contacts, as does Lookout. Most of the programs list low RAM and battery usage as a feature. F-Secure allows you to use settings that prevent children from accessing unsuitable web sites.

Costs of these programs range from about $25 to annual subscriptions of around $30 per year. Dr. Web is a one-time cost of $75 and it offers lifetime support. Kaspersky Mobile Security is priced at $30.

Above you can see a demo of the Cerberus application that shows the numerous anti-theft features of this inexpensive program. Cerebrus doesn't get involved with the malware and surfing protections of the previously mentioned programs. But it does do many different things through a web control panel like activate an alarm, sending SMS messages, wiping data, detecting if the SIM card is changed (Free Anti Theft Droid does this), GPS tracking and the ability to take photos of whomever is holding the phone when SMS messages are sent.

Anti Droid Theft can't do many of the things that Cerebrus does, but it can do both GPS and cell tower tracking. It controls the actions of the phone via SMS messages and can automatically activate GPS to find the phone location. For free, this is a great application.

Both of these applications can be hidden in the root of the phone so they can't be deleted easily by a thief. They would have to format and re-root the device to do that.

What measure do you rely on the most for your Android smartphone security to protect from malware?

3. How to Protect Your Android Device from Viruses and Hackers. July, 2012.