How to buy a receiver

Do I need a receiver?

A receiver is the core of a sound system, the switching station between an audio source like a CD player or a VCR and the speakers. Once used just for stereo systems, receivers now play an important role in home theater systems. The AV receiver is the centerpiece of any home-theater system. Its main function is to route sound and picture from different sources--DVD, cable TV, laserdisc, CD, turntable, etc.--to your speakers and television. The receiver doubles as an AM/FM tuner and typically controls everything from surround-sound decoding (such as Dolby Pro Logic, Dolby Digital, or DTS) to tone controls (bass and treble) and master volume. Since it's useful for stereo audio and standard TV and VHS setups, an AV receiver is usually the best place to start building a home-theater system, even if you don't yet own a DVD player or additional surround speakers.

Cost of a good audio receiver

Stereo receivers:
These split the electrical signal from an audio source, like a CD, into two channels, left (L) and right (R), then route it to two speakers. Many stereo receivers have outputs for an extra set of speakers, but still put out only two channels of sound. These are the least expensive receivers. Since nearly all music is recorded in two channels, you do not need anything more complex to hear great sound. However, you cannot upgrade to full surround sound unless you buy more equipment.

A/V receivers:
These have built-in surround sound decoders that separate the sound signal from a video source (like a videocassette) into several channels, then route it to several speakers. Though there are a myriad of variations on surround sound, the most common decoders can put into two types: Dolby Pro-Logic, which processes four channels of sound, and Dolby Digital, which processes 5.1 (the number 5.1 refers to the five discreet stereo channels plus the subwoofer of a basic home theater system). A/V receivers are also available in Dolby Pro-Logic/Digital Ready and Dolby Digital 5.1/DTS modes. The A/V receivers have great flexibility. Not only can you watch movies with surround sound, but you can also hook up a CD player and cassette deck for stereo sound. However, they are more expensive than stereo receivers and you will also need to buy more speakers to hear the extra channels of sound.

What’s the best A/V receiver for you?

If you go the A/V route, first think about how you will be using your receiver the most. Consider these three scenarios when you are looking at A/V receivers:

Music system receivers: A/V receivers far outnumber integrated amps both in terms of model assortment and sales volume, so the chances of getting a good price are much better than with a stereo receiver. They also come with signal processing features like DSP (digital signal processing) which can open up the audio space in your listening environment.

Home theatre system receivers: The A/V receiver is the hub of the home theater system. If you will be spending more time watching movies than listening to music, look for a full compliment of all the latest A/V inputs and outputs including S-Video, component video for DVD and DTV), Dolby Digital, and DTS — and the best surround technology you can afford — either Dolby Digital 5.1, DTS, or, if you’re on a budget, Dolby Pro-Logic.

Both: Many A/V receivers come with switchable power, which allows amplifier output to be directed entirely at the front left and right speakers for listening to music or split among surround speakers for home theater viewing.

Amplifier — This boosts the signal from the audio source before it's sent to the speakers. An amplifier is rated by the amount of power it produces, expressed in watts per channel (WPC). The "channel" refers to a single speaker, so a six-channel amplifier can power six speakers. Most moderately priced receivers and amplifiers provide 50 to 80 WPC, enough power for an average-size room. Large rooms (400 square feet or more) need 80 WPC or more. A/V receivers feature equal amplification for all channels, which makes for better all-around sound.

Thirty watts per channel are sufficient for a 150-square foot studio; at least 80 watts is necessary for a room of 400 square feet or more. If you're powering big speakers or a loud home theater system, 100+ watts will satisfactorily rattle your fillings.

Connections — A receiver is the hub for all components of an audio or home theater system and almost everything gets plugged into it, so be sure you have enough jacks. A bare-bones A/V receiver will have two A/V inputs (for a TV and VCR), one A/V output, and spring clips for speakers. It's also good to have connections for a tape deck and CD player. Higher-end models will have more video inputs — including S-video, digital coaxial and possibly optical inputs.

Surround sound decoders —This translates surround sound from the video source — like a video or TV show — and then makes sure the proper sound goes to the proper speaker. There are several types of surround sound, listed below in increasing order of quality and price. A Dolby Digital decoder can more than double the price of a basic A/V receiver. A/V receivers have one of two kinds of decoder: Dolby Pro-Logic or Dolby Digital (some models have both). The Dolby Pro-Logic models process sound into four channels, split between five speakers. Dolby Digital processes six channels, each channel going to a dedicated speaker.

Dolby surround: This has three channels (left, right, surround or rear), analog format, dialogue and sound in front, and effects in rear. They are inexpensive, entry-level surround sound option. However, they have no separate center channel, which equals less separation between channels. For about the same price you can upgrade to Dolby Pro-Logic. They cost about $250+.

Dolby Pro-Logic: This has four channels (left, right, center, surround or rear), analog format and separate center channel for dialogue. The rear channel is mono but split left and right for balanced sound. These are considered to be a relatively inexpensive way to experience high-quality home theater sound. The addition of a separate center channel provides wider distribution of sound and better separation. Most entry-level A/V receivers include Dolby Pro-Logic. However, they are not as precise sounding as digital models. They range from $200 to $2500.

Dolby Digital 5.1: These have 5.1 channels (meaning six independent channels — front left and right, center, right and left surround or rear, and a channel dedicated to the subwoofer) in a digital format. The rear channel is stereo, meaning the dialogue will be directed to the speaker that coincides with the actor's direction. Dolby digital has superior quality, multichannel sound with outstanding separation. It is the industry standard for digital surround, and its decoder is now built into all midpriced A/V receivers. They are used on all DVD soundtracks, many laserdiscs, and is also the audio format for HDTV. They range from $300 to $2,800.

DTS: These also have 5.1 channels, and digital format. This system was developed to compete with Dolby Digital, featuring similar technology. DTS can sound much more spacious and expansive than Dolby Digital on certain discs. DTS is being added alongside Dolby Digital to an increasing number of A/V components, so the user will be able to choose which one they prefer. However, DTS is expensive. To receive DTS, your receiver must include a DTS decoder which starts at about $500. Currently, there are only a handful of DVD and laserdisc titles that feature a DTS soundtrack. These range from $500 to $2,500. 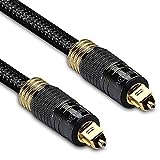 Because most home-theater speaker systems consist of five limited-frequency-range satellites and a subwoofer, you might consider an AV receiver with a flexible bass management system that permits you to direct low frequencies (anywhere from 180 Hz on down) from the five main channels to the subwoofer. This enables both the receiver and your speakers to perform more efficiently. If you're building a home-theater system around two existing full-range stereo speakers, you can leave those "full range" while directing bass from the other three channels to the subwoofer.

If you just want to play music, it is cheaper to stick with the stereo receiver — almost all CDs, records and cassettes are recorded in two-channel sound. However, with the advent of home theater, the days of stereo receivers may be numbered. Most manufacturers now offer only entry-level stereo receivers, with the rest of their lines dedicated to surround-sound A/V models.

If you are building a home theater, start with a good receiver, then add speakers later. A/V receivers can channel sound to less than a full complement of five or six speakers.

If you are shopping for a receiver with more than 100 WPC, make sure your speakers can handle that much power. The easiest way to match speakers to receivers is by checking their power rating. This is a range expressed in watts per channel, just like a receiver. For a 100 WPC receiver, you need speakers rated 81 to 150 WPC. Another way of matching speakers to receivers is by their impedance. This is the amount of electrical resistance a speaker gives to an incoming amplifier signal, measured in "ohms." Most speakers are 8 ohms — matching them with an 8-ohm receiver will give the most efficient signal transfer and prevent an overheated receiver.

Set aside 5 percent of the cost of your stereo or home theater for cables that match the quality of your system. High-end components use gold-plated jacks. If you do not use cables with gold-plated connectors, you are wasting the money you spent on those expensive jacks.

If you like your present stereo receiver and want to get surround sound, buy a separate decoder (though in the end, it's probably more cost-effective to buy a new A/V receiver).