The DX has one feature that I truly like, it can read to you out loud. The feature is listed as Read To Me. What can the text to speech feature do for you? It can read almost anything to you unless the feature is unavailable according to what you want it to read. Otherwise, it can read books, blogs, magazines and newspapers to you at will. Another great feature is the DX automatically rotates so you can see full width, such as web pages, maps and graphs. It has an auto rotating screen that rotates as you turn the device from landscape to portrait.

There's one feature that my friends are raving about and that is the DX allows you to transfer mp3 files to it. You can listen to music while you read. Just connect it to your computer using the USB cable included with it and transfer your mp3 files and listen while you read.

When you've found a new book to read, after downloading it you have the option to read the first chapter before you actually make the purchase. When you think about it, you're getting free book samples. It holds up to 3500 books and other documents and it also has a PDF Reader built in.

There are more than 400,000 newspapers, magazines, blogs and books available for DX and that include The New York Times. Now that's a large selection! Just think, you can download books in about 60 seconds wireless and you don't need a computer to do this. When I say wireless, I'm talking 3G wireless coverage where ever you may be, even over seas in more than a hundred countries.

Other features include a longer battery life, read up to a week on a single charge. You know that depends on your wireless usuage but if you turn off the wireless you can read for at least two weeks without charging the battery. Be sure and check your box before tossing it because the DX ships with a power adapter and cable for using it with your computer (USB port), the adapter uses 100-240 voltages for charging.

It's not like some devices, there is nothing to install, no computer is necessary. When it arrives just take it out of the box and start to use it. Now that's simple!

Even though it's wireless like your cell phone but you don't and won't get a bill--ever! It's Amazon's Kindle DX and Amazon foots the bill for the connectivity! Wow< I wondered why it cost so much (LOL) Therefore, there are no commitments, no bill and no set up, just use it! 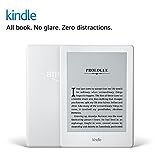