MacBook vs MacBook Air 2008 - a comparison

A Note About this Article

This article was written in 2008 about the initial release of the Macbook Air. If you want to read an evaluation of the new 2010 Macbook Air please go here.

The MacBook, one of many in a line of Apple laptop computers, was introduced on May 16, 2005 as the iBook replacement. Boasting a speed increase of five times over the iBook G4 and four times faster than the PowerBook G4 the MacBook promised to be a viable alternative to these venerable laptops.

It has kept it's promise.

However, with the recent release of the MacBook Air I thought it advisable to compare the two models on performance, expandability, connectivity, size, and weight.

First, there have been some improvements to the original MacBook since it's introduction.

Hard disc choices are 80, 120, or 160 Gigabytes. All are Serial ATA drives for faster performance.

Like the original Model-T Ford it came on one color; white. Now you can get a black model as long as you order the high end 2.2 GHz model.

The outer-skin of the MacBook is polycarbonate. For those who don't know about this material it is the same polymer sandwiched between sheets of glass to create bullet proof glass. 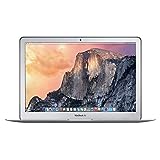 The MacBook Air is the latest and greatest from Apple. It's not a true notebook, but a sub-notebook or ultra-portable.

It's skin is aluminum and the external connections are restricted to three. A earphone jack, one USB port, and something Apple has dubbed the Micro-DVI.

It comes with one hard disc size (80 Gigabyte) Parallel ATA drive or one solid state drive of 64Gigabytes. Processor speed is limited to 1.6 GHz or 1.8 GHz.

Though there are some definite similarities between machines the differences are pronounced.

The processor speed, hard disc size and speed, and ability to connect are all lacking when comparing the MacBook to the MacBook Air.

The MacBook has more processor options, better disc speed (Serial ATA), more options in storage capacity, can have considerably more memory installed, and has one more USB port than the Air. It also has an Ethernet and FireWire connection where the MacBook Air has neither.

The MacBook Air does not include FireWire, the optical drive is an external option, and has no Ethernet connection. Basically, what the additional six hundred dollars retail gets you is a considerably lighter machine with decent performance with limited connect-ability.

The author was not compensated in any way, either monetarily, with discounts, or freebies by any of the companies mentioned.