In the January 1957 issue of Modern Mechanix, an article entitled, “Mail Via Rocket” appeared. It was subtitled, “A missile expert predicts rocket mail by 1965. Here are MI’s ideas of how the system could function.” To see the detailed illustrations and read this article in full, click here.

It is also interesting to see the comments that are attached to the blog written about this article. One of the comments made in 2008 stated, " “The only thing I can think of that this would be cost effective for is transplant organs.” Misfires and failures might even help provide a ready supply of organs from unfortunate victims."

Missile mail did become a reality, at least once, in 1959.

The Regulus 1 was the first operational U.S. Navy cruise missile. Designed to attack ground targets, it carried a nuclear warhead, flew at subsonic speeds up to an altitude of 9,144 meters (30,000 feet), and had a range of 800 kilometers (500 miles). A turbojet engine powered the missile to its target after two boosters were jettisoned. The missile was deployed on several aircraft carriers, heavy cruisers, and submarines (in watertight containers on the deck) from 1955 to 1964. Radio signals from a control aircraft or other submarines were the primary means of guiding the missile. The Polaris, the first U.S. submarine-launched ballistic missile, replaced the Regulus 1. Chance Vought built this missile and the U.S. Navy transferred it to NASM in 1988.

The Postal Age: The Emergence of Modern Communications in Nineteenth-Century America
Buy Now

On June 8 of that year, a U.S. Navy submarine, the USS Barbero, launched a Regulus I missile traveling from Virginia to Florida. Unlike a typical missile, this one was not carrying a warhead. Instead, it carried 3000 letters as a test for the U.S. Postal Service.

The missile was launched from the submarine which was stationed near Norfolk, Virginia. After travelling 100 miles, it arrived safely at a U.S. Naval Station in Mayport, Florida 22 minutes later. The test was considered to be a huge success with Postmaster General Arthur E. Summerfield remarking, “Before man reaches the moon, mail will be delivered within hours from New York to California, to Britain, to India or Australia by guided missiles. We stand on the threshold of rocket mail.”

Despite the Postmaster’s enthusiasm over the success of the flight, this method was not used again.

It appears that the Department of Defense had ulterior motives for the test – wanting to demonstrate U.S. missile capabilities during the cold war. The missile that was used in this test was a then state-of-the-art guidance system that could accurately deliver a thermonuclear weapon from a distance of 600 miles. It had successfully demonstrated its abilities, but was never used as a mail delivery method again. One of the biggest drawbacks that was never overcome was the extravagant cost of using missile mail.

What if the test had failed? Was there any really important mail in those 3,000 letters? Actually, the mail consisted of 3,000 identical letters, an enthusiastic announcement of the experiment, from Postmaster General Summerfield that were addressed to President Eisenhower, Vice President Nixon, cabinet members and top federal officials, all the members of congress, the Supreme Court justices, U.S. governors, postmaster generals around the world, and finally to the officers and crew of the Barbero. The letter that was addressed to the secretary of the Smithsonian remains in the National Postal Museum’s collections.

Rocket mail had been under consideration for quite some time, however the logistics of how the missile would reach its target was often discussed tongue in cheek. Generally two arrivals were considered. In the first mode, the rocket would deploy a parachute to float gently to the delivery site. In the second scenario, a lot more flashy, the rocket would crash plowing its nose into the ground.

Experiments with rocket mail soon became a favorite pastime for tinkerers in the early 20th century. 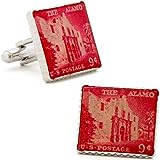 Prior to this, many attempts at carrying mail through the use of rockets had been attempted.

In 1902, rockets were used to deliver mail from ship to shore in the Fiji islands.

In 1931, an Austrian engineer named Friedrich Schmiedl successfully fired 100 pieces of mail from one Austrian village to another. Afterwards, many others in various countries scrambled to duplicate his success.

After a series of highly-publicized failures in the 1930’s, many of which were Gerhard Zucker’s, a German businessman, he was determined to make rocket mail a reality. Zucker, a showman and a charlatan, sold tickets to public launches. During these launches he used impressive-looking missiles filled with powder rockets which created a major theatrical show. His launches eventually attracted international attention.

In 1934, Zucker was invited to give a demonstration to British Royal Mail officials. Claiming that his rockets could travel 250 miles at speeds of 2,200 mph, he launched his demonstration rocket from a beach in Scotland. Although the mail did indeed “travel at a high speed, it did so in many directions at once, and for a rather short distance.” After this failure, which incinerated the mail, Zucker was deported for “Mail Fraud” back to Germany where he narrowly escaped commitment to an asylum.

In 1936, an American Legion Post in Texas tried twice to deliver mail into Mexico. During the first attempt, the rocket blew up in mid-air, showering mail fragments to the earth. The second rocket landed on a cantina in Mexico. Fortunately no one was injured. Mexican officials confiscated the rocket and its contents.

The most successful early rocket mail was achieved by Stephen Smith in India. He successfully initiated 80+ rocket mail flights between 1934 and 1944.

With the advent of email and the internet, the death knell for rocket mail was heard. Despite this fact, many are still intrigued by the idea, and rocket mail still has its advocates.