As a new owner of a Motorola Droid, there are some things you need to know that isn't explained in the manual or by the sales people. I hope you find these tips useful. These tips include the programs I found to improve your user experience, as well as some stuff about the hardware that you would not otherwise know.

NOTE: Reviewed on Motorola Droid running Android 2.1-update 1. These apps MAY run on other Android based devices, but have NOT been tested. 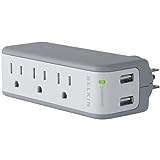 Great for road warriors, this mini surge protector not only protects anything you plug into it, it also turns a single outlet into 3, as well as provides 2 USB power ports for those with USB charging cables, which includes iPods, Droid, many Bluetooth headsets, and more

The AC adapter included is actually a USB power adapter: it turns AC into USB port for power only. However, the cable you get with it is actually a full USB data cable, which you can use to connect to your PC or laptop, and use it to transfer data back and forth. It also charges the phone from the USB port. You don't need to buy a separate data cable. If you already have a power adapter such as a laptop, or a USB power port such as the ones available on a Belkin adapter, then you don't need to take the AC adapter at all.

If you bought the "multimedia dock", you'll find that all it really is... a holder that holds the phone in landscape mode, at 45 degree angle. However, the phone goes automatically into "dock mode" and acts like a clock, and even has a weather widget. On the other hand, the dock is not compatible with the snap-on cases, as the cases prevent the phone from entering the dock and touch the charge tip. You can probably make your own dock out of cardboard.

On the other hand, the multimedia dock's AC power supply can be used WITHOUT the dock, by plugging it directly into the phone. As Verizon charges the same $29.95 for the dock vs. the AC adapter, you may as well get the dock.

Your Droid comes with a 16 GB MicroSD card already installed behind the battery. To "mount" it so you can copy files to it from the PC, connect the USB data cable (see tip above) to the PC, and the other end to the Droid. Drag down the status bar, and click on USB data cable, to "unmount" the card to make it available for the PC. You should now be able to access the drive from "My Computer" on the PC. If you can't, and get a "media not found" or similar error, you forgot to "unmount" the media on the Droid side. When you're done copying, do the step again on the Droid to remount the card.

The data cable can also be used to tether your laptop or computer and use the phone as a modem to access the Internet using PDANET.

If you think the default three screens is too limiting, there are two programs you need to know: HelixLauncher, and Apps Organizer, and can be downloaded from the Apps Market.

HelixLauncher expands your home screen to FIVE screens, instead of 3 (the paid version offers even more). While it occasionally freezes and needs a "force close", it works well enough. it also gives you four quicklaunch shortcuts at the bottom for your most often used apps or shortcuts. You may also want to check my review of other home replacements.

Apps Organizer gives you the ability to create app groups, and assign shortcuts to a group. By default it has 6 groups (actually 5, but anything you did not assign to the 5 belongs to "other", the 6th group). Assign your apps to them, and you can then assign shortcuts to these groups on the homescreen. Opening the group will pop up a window where you can select the individual apps within the group.

The phone often goes dark or locks when you don't want to. While it is possible to set your time-out longer, another possibility is to download the StayAwake app/widget. Put the widget on screen, and you can toggle it between normal, dim (but no lock), and bright all the time.

Consider putting the power control widget on one of the side screens. It is the one with 5 buttons, so you can control wifi, bluetooth, GPS, 3G, and Brightness with touch of a button.

Put your most often used apps, such as "CarHome", Voice Dialer (or substitute), Browser (or Opera), Message (or substitute such as Handcent SMS), on the center "homescreen".

All these apps are absolutely free, and easily downloaded from the App Market.

TuneWiki and Cubed -- both are excellent audio players, much superior to the built-in one, but also do YouTube music video searches, Last.fm and other Podcasts, and even lyrics.

txeet -- send SMS based on existing SMS "templates" with new templates submitted by users and voted on by users. Templates are sorted by category and occasion.

Keyring -- store all your "buyer's club cards" such as Office Depot, CostCo, Borders, and so on in your Droid instead, just show them the barcode when you check out. Keeps the cards out of your wallet.

Bluetooth File Transfer -- send stuff to other devices and get stuff back, if supported by the other phone or device, and the file can be anything, from videos to rightones.

DroidLight -- turn the "flash" into an emergency flashlight. Not that bright, but in the dark it is bright enough. Uses a lot of power, so not for prolonged use.

AppBrain / Market Suggest -- both are recommendation engines based on what you have already installed, and also help you manage the applications (uninstall them, perhaps).

Talk To Me -- say a sentence in English, and have it translated back in up to three different languages, and SPOKEN, using the built-in text-to-speech engine (you need to install the TTS extension, also free in the Market)

Google Goggles -- take a picture of something and have Google search based on that picture, instead of by keywords.

Pro Paint Camera -- basic effects of camera, plus ability to add annotations by drawing on the screen itself, plus other editing tools

Layer -- "augmented reality" by using the camera and GPS for orientation, and adding labels and such to stuff that is "visible" through the camera. If you play games, imagine those pop-up info boxes that will stay linked to an object on the screen, no matter where it moves. If you need to find Pizza shops near you, add a "layer" of pizza shops in 1 mile, and you'll get a "radar" display of all the pizza shops near you, as well as dots telling you where they are from your exact viewpoint. It is hard to explain, so just go download it already!

Motorola Droid is a good phone, with a bright future, and I hope the preceding tips have helped you somewhat as a new user. I know it took me many many days to configure the phone to the way I wanted, and if I have saved you some time not to relearn the stuff I already learned, then I've helped.

If you enjoyed this hub, also explore my other Droid related hubs, which offers more advice on other programs to download, review of camera apps, review of home replacement apps, review of live wallpapers, and more.