Nexus 6P first look and best case accessories for it

My Nexus 6P finally arrived. While I am still tinkering with the settings and configuring it to maximize my battery life, here is a sneak preview taking a first look at the Nexus 6P and all the best case accessories I have found. I'll actually speak a bit about the quality of the cases as well as how they fit together with tempered glass screen protectors as well.

You may also be wondering why I am trying to maximize the battery life. The Nexus 6P comes with a gigantic 3,450 mAh battery plus Doze, a new feature in Android Marshmallow. Nevertheless, I seek to maximize my usage time whenever possible. I'm really unsure as to how others are able to hit 5 to 6 hours Screen On Time while I am only able to get about 4 hours.

Not the coolest, I admit. Everything is enclosed inside a styrofoam-like shell, but with a paper wrapped 'P' logo. I actually received the package just like that. The paper wrapper was slightly ripped from the "very careful" shipping and handling companies. Google did a nice job packaging up my N6P nevertheless. It arrived in a brown box with plenty of paper balls and foam around the actual package to absorb any shock and prevent major hits.

I'm honestly not sure what Google's intentions are here. You have another piece of paper with a pull-up tab that I'd have to "pull-up" and move out of the way before I get to my actual device.

This is where I discovered true beauty! I never realized that a 5.7 inch screen was so big. Admittedly, it took me quite some time to get used to. My old Galaxy S4 was rocking just a 5 inch screen making it the perfect hold for one hand.

I have yet to find the grip to hold the phone for one-handed navigation and typing. Typing, especially, was something that I was not used to. Hard to explain, but I essentially type with my right pinkie finger resting on the bottom edge of my phone to hold it in place while I type. With a phone this big and slightly heavier, trying to do so with my pinkie finger isn't exactly pleasant.

It's all black and rocking dual speakers, which is quite awesome in some instances and not so awesome in others. Dual speakers really take advantage of the media playback that I use. Whenever I'm watching a YouTube video, it feels so much nicer to have dual front facing speakers as opposed to a single back speaker on my Samsung Galaxy S4.

The downside of the dual speakers, more like the software is when it comes to calling. Calling from speaker-phone doesn't utilize both speakers. Instead, it just uses the bottom speaker. I would have preferred both speakers just for maximize volume. Why else would I put someone else on speaker if I want the people around me to hear the caller? I don't think Google thought of this design too thoroughly.

You either love it or hate it. The Nexus 6P will appeal to some, but not to others. More specifically, I'm referring to the black camera bar at the top of the phone. Some people find it weird and overly unnecessary especially if it prevents the phone from lying flat on the table.

I've actually grown to like it. It's actually very nice. I like how it people catch glances at me and even turn their heads to see what I'm holding. I commute quite a bit so I usually have my phone out for two reasons. The first reason is because I actually do use it quite a bit. The second is, well, it's too big to fit in my pocket and will often chafe it. Plus, I'm rocking a Spigen Ultra Hybrid case to go along with my N6P. The case itself is transparent so I get a bit of drop protection without sacrificing the amazing view of this device.

Without further ado, let's jump right into it. The best accessories that I consider to be for the Nexus 6P case. There is one thing that we need to establish before we get started. A lot of case manufacturers wanted to jump on-board and be the first to roll out N6P accessories so they made their initial batch of cases based on the leaked renders. The problem with this is that their cases tend to block the Laser Auto-Focus sensor right beside the camera. It's no surprise that they missed it because the laser auto-focus sensor is actually difficult to see.

If there is a case that you want, but you do not see the Laser Auto-Focus cut out beside the camera and flash, then this is a case you would want to avoid. Most manufacturers have retracted their first batch of bad cases blocking the auto-focus sensor, but there will always be some out there that will try to pass it off to those that don't know better.

This is the case I'm using right now. My only dislike right now is the way it infuses a plastic back with TPU sides. I don't understand why Spigen actually went with this "hybrid" design. It doesn't look as cool as if it was a unibody case because the separation between the TPU and plastic is shown in a thin white line.

On another note, I actually like how Spigen decided to leave the entire black bar exposed rather than just the camera hole. In a way, this produces a more symmetrical look and feel versus if it was just a cut out around the camera hole.

I actually had to call up Spigen's warranty because my case came stretched out. There wasn't a good fit on one of the sides and there seemed to be air bubbles forming. Every time I picked up my case, I could feel the air deflate from one of the sides of my case. As I'm writing this, I am going case-less as Spigen forced me to destroy my old case in order for them to ship a new one. This makes sense as they aim to prevent warranty abuse.

So for the next week or so, I just pray I don't accidentally drop my N6P given how slippery it is.

Other than that little defect I experienced, I rate this case a 9.5 out of 10. I haven't experienced the part where Amazon users talk about their case yellowing fast, but I'll be sure to lower this score if I experience it. 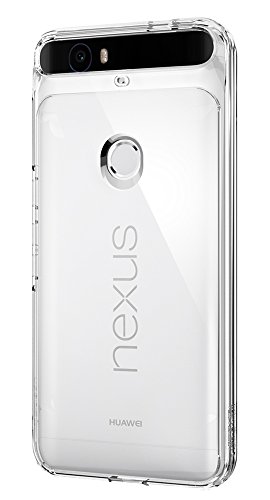 This case leans towards a more expensive side. Case-Mate was actually one of the manufacturers to have made their first batch of cases from the N6P renders. They quickly corrected the issue and now their cases should have the Laser AF cut out.

I'm a fan of this case for similar reasons as the Spigen Ultra Hybrid. The case keeps everything to a bare minimum and exposes the body quite nicely. Furthermore, it offers more protection with a wrap-around bumper to really absorb shock. The downside, of course, is the two part design. With more parts in a case, I question the tight fit it will have over time especially if the bumper has to keep the back shell together.

Another dislike of mine is that this case doesn't completely expose the camera cut out. Yes, the camera, flash, and auto focus have their respective cut outs, but I would have preferred to see an entire black bar. While an exposed complete black bar does attract more dust, I do still think it looks nicer than just a partial cut out.

I won't post an Amazon listing for this case as I believe it is best to buy it from their website to ensure that you are getting the laser auto focus cut out. I rate this case a 9 out of 10 because it has the same transparent appeal, but loses marks for the two part design concern.

This case is great for if you want the same metal finishing and feel, but still wish to protect your phone against drops. It doesn't add too much bulk given that it has an aluminum like finishing.

My only concern with this case is that it tends to be a "one-time case". I actually experienced this with my Element Case and the idea is the same with the Verus as well.

Since it's aluminum, it will dent very easily. If you every drop your phone, there is a high chance that it will make a dent and scratch into the back of the case. You will lose the smooth aluminum finishing. This is by far the major downside of this case.

Design and feel wise award it points, but it's touch and feel after the first drop is where this case loses major points. I rate this case a 7 out of 10 for its value, but definitely not one of my go to cases.

I'm personally not a fan of this case, but I have friends who swear this case isn't as big as it seems. This case has got that hardcore and durable look written all over it. The fake screws are certainly a nice finishing touch.

One advantage I see with this case over Spigen's Ultra Hybrid is the grippier sides. The Ultra Hybrid, I admit, does seem slippery at times especially when my hands are wet or sweaty. If you share the same experience, you might be better off with the Unicorn Beetle than the Ultra Hybrid. It still reveals the 'nexus' logo on the back quite nicely, but doesn't show off the whole phone as much. Nevertheless, I would say this is still one case definitely to consider. End rating: 9 / 10 still with concerns about the thickness.

Which case are you rocking right now?

The Spigen Ultra Hybrid is still the case that turns heads whether I am on the bus, walking down the street, or making a phone call. Just how much does this matter when it comes to protecting my phone? Okay, I admit it, none at all. But i still want a case that provides the best all-around features. The Spigen Ultra Hybrid does exactly that. Once you pair it with a tempered glass screen protector, I believe this combination will truly protect your Nexus 6P. The idea is simple really. This case is super transparent and I love the evenness with exposing the full black camera bar.

The edges have extra thickness to absorb and disperse the shock. After receiving my warranty case from Spigen, I have to say the customer service is pretty great. Only downside is they use USPS to ship replacements, which means it will take a bit longer for you to get your case. Overall, I highly recommend this case as a buy.