Razer Blade Laptop : The Best Gaming Laptop on the Planet

Razer the company with the best gaming accessories in the world has done it again. From there elite gaming mice, headsets, keyboards, and of course perfected mouse pads comes the largest release ever. I am talking about the first ever laptop by gamers for gamers. The Razer Blade is the worlds best gaming laptop. The Razer Blade is exactly what gamers need and crave on the go. Regardless if your home or out the Blade performs as well if not better then your desktop at home. The Blade brings new technology to use to reduce the weight, increase the screen size, show dramatic color and music, and of course actually has a brand new never before seen in a laptop user interface that is specially aimed towards gamers. Higher frame rates, more abilities, more raw power. This laptop makes Alienware Laptops look like business class ones. No matter what your favorite game is this is the computer to play it on. Lets check out some stats of the Razer Blade.

It is becoming the age of superthin laptops. Thinks like the macbook air and tablet pcs are all valid examples of this technology. The one major thing to note about this is on both a tablet and a macbook air the performance is lacking for videogames. Mac can't run many games and tablets are far to weak...there needed to be a new technology for gaming. The Razer Blade brings this technology out in the first every gaming laptop that is truly portable. It is only .88 inches think and 10.9 x 16.81 inches big. Almost the exact measurements of the 17 inch diagonal screen. This computer is so lightweight that it weights in at only about 6.9 lbs!!! That's amazing seeing I have a 17 inch laptop that really is much larger and heavier then this! The laptop itself is milled out aluminum to give both the small sleek light weight feel and pack the power that gamers need. I know one day a gaming laptop might be the size of a sheet of paper, but for now this is totally awesome!

While all kinds of features are offered in many different laptops, the Razer Blade brings forth the newest gaming technology on the planet. Never before seen this new innovative user interface is designed for gaming. Gamers normally need to multitask between shooting, switching weapons, and activating items while casting spells. This ui makes it more exciting by bring 10 dynamic adaptive keys with matching icon overlays for the game you are currently playing. These keys are binds which contain macros to activate game menus, show skills, and many other commands like items. The keys are also programmable so you can make your own macro to activate in the heat of battle. Each switchblade ui come with pre-defined profiles for games like League of Legends, Battlefield 3, and Rift. While there are many more games the software automatically updates for the game you are playing from Razer, so if a UI exists for the game it is downloaded and activated. This LCD screen also doubles as the mousepad for gamers on the go who can't use a standard mouse. Think of the possibilities, in League of Legends for example you can activate items from a click of a button or check the scoreboard without ever covering the main fighting screen! This truly gives a gamer a 1UP advantage over other people playing the game.

What are YOU waiting for? Buy Yours ASAP!

The Razer Blade will be high in demand. Why not pick one up now? Team the Razer Blade up with some other awesome Razer Products such as a Razer Mamba Mouse and a Sphex Gaming Skin. Don't forget your Razer Chimera Headset so you can communicate with your team and achieve victory! Razer for gamers by gamers has to be the coolest company of all computer companies on the planet. 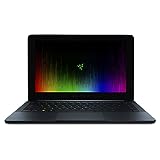 League of Legends on Razer Blade