Total solar energy absorbed by the Earth is more energy in an hour than the entire world uses in a year.

It is as much as energy per year as all fossil fuels available in the earth put together.

For new types of solar panel, the energy generated by a solar cell over time is between 10 and 32 times greater than the energy needed to produce and maintain the solar cells.

Although you can easily install solar-powered water heaters, or generate electricity from solar panels on your roof, these are relatively expensive to do, even if they save you money in the medium term.

Both heaters and electricity-generators also require installation, tanks, wires, panels, and all the rest of it.

If the above doesn't seem right for you at the moment, there are also home units which can be powered individually through solar energy, ranging from electric fences through solar ovens to pond pumps and swimming pool heaters.

Solar cookers are a big subject on their own, and a more detailed article about solar ovens and solar cookers can be found here.

This article looks at some of the items available today, and how they work. 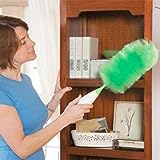 If you want to have a solar powered water feature in your garden, there are a number of solar garden water pump kits available to fit to your fountains or pumps.

They use no carbon-generated electricity, and are therefore very cheap to run and have environmental benefits too.

Some will only work during the daytime when there is sufficient direct and defused sunlight to power the system, especially those designed for birds (which aren't interested in night-time bird-baths).

Daytime-working only is also common for those water features supposed to be viewed at a distance (when you won't be able to see it at night, anyway).

Others will store solar energy in rechargable internal batteries, so they can work when there isn't enough sunshine.

Ponds are an area of garden landscaping where solar energy can come in particularly handy.

Many ponds need to be oxygenated, and solar-powered oxygenators are ideal for this.

It minimises the need to worry about long cables from a mains supply, and the solar units are robust and reliable, as well as being compact.

I gave my father a solar powered pond oxygenator for Christmas 2007, as he is most possessive of one of his ponds, which is several hundred yards from the nearest electricity supply.

It has survived frosts, snow, the pond icing over, rain, wind and summer in perfect condition, and works very well indeed. Even in England, the output is sufficient to keep the pond in a good state.

Solar pumps are also available, and are similarly useful in avoiding cables and electricity worries.

If you fancy a ghost-like bulb of light floating in your pond of an evening, this too can be arranged with solar power! 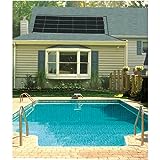 Swimming pools can be extremely expensive to heat, whether they are below ground or the above ground version.

Running fossil-fueled heaters will not only cost a fair whack on your energy bills, they are also bad news for your carbon footprint.

Solar power technology could almost have been designed for heating pools, and the products are more efficient than ever.

Solar bug killers for the garden or picnics

You can also buy solar bug zappers, which kill flies, mosquitoes and midges which are spoiling your enjoyment of your garden or your picnic.

Once left in the sun to charge, the bug zappers can then be used after dark when the mosquitoes are particularly annoying.

They don’t have to be consistently in sunshine in order to work.

As they don’t need mains electricity, you can take them if you’re going for a picnic somewhere away from home.

Solar powered fans and controllers give a powerful ventilation system which can be set in a wall, with a solar panel fixed to the outside of the building.

There is also a battery, so the fan does not have to be in direct sunlight at all times to work, but can be charged up by solar energy.

Some of them also have an extra battery which can be charged with a solar charger or a normal battery in case the solar energy is insufficient.

These are particularly useful for attics or lofts, because a serious amount of ventilation can be powered from a panel situated on a roof.

The panel is likely to get more sunshine than a panel on the side of a house.

I have a friend whose parents own a rural house in the south of France, and they have similar solar-powered fans in the attic, and in all rooms with an outside wall.

They are very efficient, and, of course, free to run.

Electric fences are another type of residential device which can be easily and efficiently powered by solar energy.

Most of the these systems either have rechargable solar batteries, and / or an energy back-up in the form of conventional batteries (ideal for people who live in areas where solar power is not reliable enough in the winter).

Passive solar heating and cooling in the home

In designing a home from scratch, or re-modelling an existing building, attention is increasingly turning to making a house naturally cool in summer and warm in winter, through design and ventilation.

This is not a new idea - houses in the Middle East, or India, from centuries ago were built with precisely these concepts in mind.

Many have been ignored in recent house-building in the developed world, which is short-sighted and wasteful.