This international version Android smartphone comes with a number of improvements to its software, design, and camera; and impressive features; including security, health, user experience, and much more; making it the world's most cherished smartphone.

The Galaxy s5 comes in different colors; white and black: Both black and white phones are unlocked and can be used with any SIM card from any country.

Samsung s5 runs on Google's Android operating system; which is the most popular mobile phone operating system due to its user-friendly interface. Android OS works perfectly with a number of applications and Google apps, including maps; calender; Gmail; YouTube; Games; Music; movies and other Android apps found on Google Play store.

Download Free Android Apps for Your Smartphone from Amazon Store!

Samsung Galaxy s5 has internal memory of 16GB; making it easy to store a number files like music; video; documents and other files without running out of storage space. On the other hand, the Android smartphone also has 2GB of RAM, and supports up to 128GB external memory achievable by micro SD expandable slot.

The type of Processor a phone has is very important due to the performance reasons; and must be put into consideration when purchasing a mobile phone: The Android Smartphone comes with a super high speed processor; a Quad-Core 1.3 GHz Cortex-A7 Processor that makes this cellphone super fast when using it for different purposes. On the other hand; Samsung Galaxy s5 also comes with a high performance 64-bit CPU; Quad-Core 1.9 GHz Cortex-A15 that makes it even more powerful. 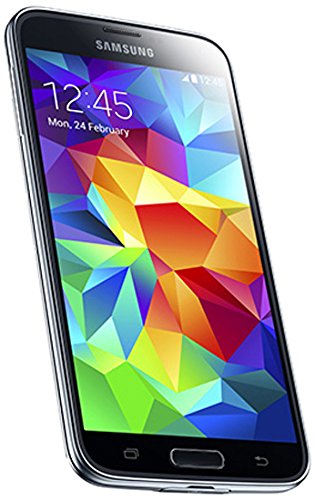 The rating of Samsung Galaxy S5

It's amazing to know that Samsung Galaxy S5 is waterproof and cannot be affected when it drops inside water. It has been tested and proven by big technological companies such as TechSmartt and Techrader; and the water-proof nature of Samsung Galaxy S5 is not just a mare speculation. On the other hand; this Android OS smartphone is dust resistance and cannot be affected when exposed to dust.

Samsung Galaxy S5 smartphone comes with a 2800 mAh Lithium Li-ion battery; which is a long lasting battery. Lithium-ion batteries are best since they have a higher energy density; and charge or discharge efficiency of 80-90%.

Samsung Galaxy S health feature has an enhanced S Health App that incorporates a number of health and fitness trackers. This Android smartphone has a unified dashboard; where you cam track your heart rate using a heart rate sensor.

Samsung Galaxy S5 comes with a fingerprint reader; which allows for reading your finger prints when there is need to scan for fingerprint. This feature is making fingerprint technology more accessible to users of Samsung Galaxy S5 who may need this service for different reasons such for security reasons.

Which one among these is your favorite Mobile Operating System?