The Use Of Drones As A Work Tool

Drones use to be technology that exist only in science fiction movies a couple decades ago. Today, drone is the buzz word we hear just about everyday on the news and through the social media. It is a word that is searched by early adopters thousands of times a month on Google and other search engines. Unfortunately, when a new tech toy is introduced to an unprepared society people have the tendency in the beginning to do all the wrong things with it.

In the case of drones for example, invading the privacy of an unsuspected person or flying them in restrictive air spaces near airports putting the lives of people aboard commercial airlines at risk. Despite the bad rap the public have given these magnificent flying machines; there are some good uses for drones, especially when it comes to performing certain jobs.

Before I can begin to write about some of the beneficial uses of drones let me explain what they are. A drone is basically a remote-controlled, unmanned aircraft or missile with an attached camera or some form of tracking device such as a GPS system to track its location. We will not be talking about missiles here but a missile is a drone designed for one obvious purpose.

The drones I will be talking about here are not for destructive purposes, but for hobbyists or non-military personnels. They generally come in the four-propeller configuration called quadcopter or the six-propeller configuration. These drones can range in price from a few hundred dollars up to a few thousand dollars depending on the accessories added to them and their size.

What are Drones Good for?

There are many practical uses for these flying machines since they are capable of taking incredible videos from inaccessible locations. You can use them to save time, reduce the cost of performing certain tasks, or even make a dangerous job safer. These three beneficial uses of drones video can be applied to many occupations and situations. Below are some examples of how drones can be used to meet these three objectives.

Using Drones to Save Time

This is a easy one. Amazon is already working on plans to reduce the delivery time from a few days to a few hours for their customers by using drones to deliver packages to their doorsteps. They hope the use of drones will make it possible to make delivery to customers almost immediately after an order is placed. Once they get the go ahead from the FAA this will become a familiar sight in some towns in the near future.

Drones can be used to survey crash sites and disaster sites immediately after the event occurred. Deploying a drone to these sites would be a lot faster and easier than getting a pilot and helicopter to the site. Using drones will allow first responders to make quicker and better assessments of the site before going in to search for survivors. Also, drones can take critical videos and photos of sites with out disturbing the site. This information can become very important in helping investigators determine what happened at the site before helicopters start flying in for search and recovery operation and these photos can help first responders plan their search and rescue operations to be more efficient and effective to save more lives.

After the devastating 7.8-magnitude earthquake that struck Nepal in late April 2015, a team from Ontario Canada called GlobalMedic was there. They specialize in using unmanned aerial vehicles or UAV for rescue and recovery operations. Several drones equipped with thermal cameras were used to locate survivors and to map the area for locations of obstructed roads, damaged buildings, and population movement in real-time. All this information proved critical for rescuers to move resources efficiently where they were needed the most during the rescue operations.

Drones can make some dangerous jobs a lot safer for people in various occupations like firefighters, police, building inspectors, and even in many areas of science. For example, a geologist can use a drone to get up close to an erupting volcano without endangering himself.

There are several spectacular close-up drone videos on YouTube of erupting volcanoes in the Bardarbunga volcanic system in Iceland taken with a high definition camera mounted on a drone. These videos would be almost impossible to take any other way without putting the person in danger of serious injuries or risking their life. The video shown here was taken with a GoPro camera mounted on the drone. Unfortunately, the GoPro camera lens were melted in the process to take these incredible images. There is even a case where a couple of drones were sacrificed to take images similar to this one in Vanuatu by a group of photographers with the National Geographic magazine. Obviously, these images were well worth it.

The obvious use of drones is the fact that they can take videos from a high vantage point. Many professions require people to perform certain job functions in high places. For instance, a building inspector can use a drone to take images of the roof on homes to check on its condition without using a ladder. Wouldn’t it be nice if they could configure a drone to clean windows on high rise buildings without putting people at such dangerous heights in a basket to do that.

Farmers can use a drone equipped with special cameras sensitive to various wavelengths of light, such as, infrared or ultraviolet light to perform aerial inspections of their fields. They can catch potential problems about the health of their crops before it too late such as poor drainage of water on the plot or stopping the spread of insect infestation or plant diseases.

A zoologist can safely conduct a population count of animals on the open savannah of Africa without the risk of being attack by an unsuspecting predator lurking nearby. As you can see, all these uses of drones are less expensive than using a helicopter and in all cases anyone can do these activities themselves without hiring anyone to do it. 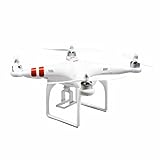 Some of the ways drones can be be used to save time would automatically reduce the cost of doing certain activities since less time is involved to do the task. Many movie makers are currently using drones to reduce the cost of filming movies. They have used them to reduce the cost of post production by strategically positioning several drones, at once, in various locations during filming while shooting a specific scene from multiple angles. This method of filming reduces the cost and time of having several very expensive cameras moved from one location to another by the filming crew and reduces the size of the crew involved in the filming process.

Several popular movies have been filmed using drones. In the opening scene of the James Bond movie, Skyfall, a drone was used to film the chase scene on the rooftop of buildings in Istanbul. A drone was used to film the aerial scene in Harry Potter and the Chamber of Secrets where Harry is driving the flying car with this scene as the backdrop in the movie. Other movies drones were used in are; The Wolf of Wall Street, Van Heising, Transformers, and the popular TV series, Game of Thrones.

Using drones to film portions of a movies is becoming a rapidly growing trend to save money and time during filming. This example illustrates the strongest point of why drones are useful in many ways because they are very maneuverable and their relatively small size is perfect for many situations. Imagine trying to film this scene with helicopters. It would have been a lot more complicated and expensive.

As you can see, drones can be useful in a good way to make dangerous jobs safer, to save time and to reduce the cost of performing certain tasks. The examples mentioned here of how drones could be used are just a few of the ways they could be used to benefit the general public. I am sure there are many other ways drones could be put to use. Share some of your suggestions in the comment below.