See the world as you never seen before!

Google maps is a great application, courtesy of Google, that allows users to see the world in ways never imagined before. Indeed the fact that you can zoom in anywhere across the globe and view satellite imagery from the comfort of your home, may be quite astounding. Yet, there is a relatively new function that will literally immerse you into a 360 degree view of the world as if you were really there. It is called ''Google Street View'' and the name says it all.

It all starts by opening the google browser and selecting the maps function found at the top left corner right between videos and news or as an alternative, you can simply visit Google maps  by going directly to its homepage. Here you will have the opportunity to type the name of a road  or place that you are interesting in seeing. It is important to point out that not all roads can be seen with Google Street View. Generally, larger roads of cities and large towns may be seen, while often rural and remote roads are not captured.

So let's say you want to visit the Colossuem, the famous Roman site where gladiators use to fight. You will type ''Rome Colosseum'' and then  the search maps button. At this point, you will have a nice satellite view of Rome and the Colosseum which is marked with the letter A.  Now, however, we are not satisfied with this view. We want to enjoy the Colosseum in first person as if we were strolling down the roads. So we will look up in the left corner where there is a bar to zoom in and out of the imagery. Right on top of the plus sign to zoom in, is a cute orange character that you can literally drag with your mouse and take him out for a stroll.

So drag this orange pegman and drop him right by the Colosseum. Don't be afraid to drophim there, he is used to be treated this way! You will then see nothing for a second or two and then a blurry image that will get gradually clearer and clearer. Now you are free to navigate using the navigation feature on the left that will allow you to look in all directions.  With your mouse you can double click on a white circle that will allow you to look around and stroll through the roads.

You will be amazed in seeing actual details as never seen before. You can literally see the tourists, the cars, the stores and even read signs! Indeed Google street view can almost replace an actual trip to various touristic attractions. There are also various collections on the web of peculiar sightings found using the street view feature.

Google street view is an amazing function. It is actually so detailed that many people have grown concerned about it violating the privacy of the public. Yet, it is also thanks to the details provided by Google street view that a kidnapped child was tracked down not too long ago, in Virginia. Here is the story. 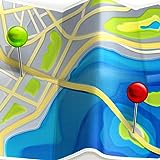