Thumbs Up for the New Samsung Galaxy Note9 Phablet 128/512GB

Well if you want the latest and greatest new piece of tech, Samsung have just released the large Galaxy Note9, that takes on the Apple iPhone X.

Available in either 512GB or 128GB, this compares to the Apple X with 256GB. The 512GB Note9 comes with 8GB of ram, while the cheaper 128GB offers 6GB. This compares to the newly released Samsung Galaxy S9 + which although also offers 6GB of ram (the Galaxy S9 is only 4GB) it only has 64GB of storage. So the new Note9's are a leap ahead of the best smart phones Samsung make.

Samsung must be predicting that the 128GB Note9 will be the bigger seller as that's offered in three different color case choices of either, black, blue or copper, whereas the quite more expensive 512GB is offered in black only.

When you're paying top dollar for the best, you definitely get it with the Note9 coming with a beautifully curved 6.4 inch AMOLED screen with 1440 x 2960 pixel resolution. This gives it a high 516 pixels per square inch (458 for the Apple iPhone X).

The new Note9's do come with a Corning Gorilla Glass cover but it's still recommended to buy a cover for it as Samsung only offer a twelve month warranty on that, so they obviously don't see it as a future strong point.

The camera's on the Note9's are fairly much on a par with the Samsung Galaxy S9 Plus. That is they feature dual 12 megapixel, with two physical apertures of f/1.5 and f/2.4, with wide angle and telephoto. Apple has a reputation of the best cameras in the business but the new Note9 is right up there with them. The Apple has a f1.8 and f2.4 apertures.

But with the new Note9 you've also got super slo mo video, 4k video at up to 60 fps and live focus. This competes directly with Apple.

One brand new feature is scene recognition for people or scenery. It has an artificial intelligence chip that recognises what you're taking and adjusts the settings automatically for you and tweak the shot. No need to transfer this to another device, it's all done in house on the Note9.

Compared to the Samsung Galaxy 9 Plus, Samsung have repositioned the rear camera system on the Note9 to put the fingerprint sensor underneath and away from the lens. A much better improvement.

Improvements to the Note9

Compared to the Note8, the Note8's hardware is hugely improved. The Note9 is faster, smarter and just plain better.

The S Pen can now do more through a low power connection bluetooth.

The S Pen has a ten metre reach and can draw on the screen with little lag. But it also plays a role as a remote control for the camera and will flick through powerpoint slides.

The S Pen only has a thirty minute life but the bonus is that it takes only 30 seconds to recharge. Note though that the S Pen will draw on the screen without battery power and only needs it for bluetooth.

A development kit is coming this year for the S Pen so that developers can make use of the 2 buttons for their apps.

There's being a big improvement in the battery size for the Note9 from the Note8. The Note8 had a 3300Ah battery but Samsung have increased this for the Note9 to 4000Ah. I haven't had it long enough to test the increase, but you can bet even using all the powerful features that it'll go for more than a full day.

Here Samsung have taken Apple on and beaten them to their own game. Samsung have launched a dual charging pad for the Note9 and the new Galaxy Watch.

So now the Watch and Note9 work in sync, which is about time. Aple's long had this feature.

Samsung though have built on the capabilities of the DeX capability and so it's now possible for you to connect a monitor straight to it by USB - C Port (the new DeX has more ports) and it will also handle a keyboard and mouse.

This means that you could replace your notebook or tablet and just run the Note9 as your main device, it's now that powerful.

Samsung are working hard to take the throne away from Apple in the premium device market.

If you want the best there is in current Android Smart phones - The Note9 is just that. 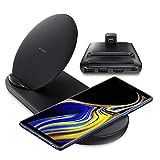