This isn’t the first time that I have reviewed a Wacom project, such as the Bamboo Fun and the Intuos4. They have produced some terrific tablets, and when I say tablets, I mean the type that use a digital pen, not the iPad.

The Bamboo Pen and Touch is one of their Multi-Touch series of tablets, I believe that there are about five of them that have this ability. These multitouch series is clearly designed for those that are addicted to the iPhone’s touchscreen, and don’t have one on their PC or laptop.

The finger spread and pinch have been applied to the Pen and Touch, and they are used for zooming in and out. The fingers can also be used to rotate images as well. All the user needs to do is place two fingers on the pad and pretend like you are turning a dial. The touch function also comes in handy for scrolling as well. In short, it is like turning your desktop or PC into an iPhone or iPod Touch.

The Pen and Touch also has the trademark Wacom pen, which is what put Wacom on the map, technical-wise. I have already stated in previous articles how interesting a pen makes for signing a signature, doing a drawing, and other tasks. The Pen and Touch has an interesting feature with a tiny band on the side that is perfect for holding the pen. This is a feature that I haven’t seen on other models, and is needed a lot more than that holder thing that they used to have. Another thing that seems different than other models of the Wacom tablets is there is some sort of indicator light when the pen is close to the tablet, and the pen does not even have to be touching the tablet to make the cursor move.

Something that the Pen and Touch has that I have seen on its other models are the Expresskeys that allow the user to set up their own shortcuts for applications. Also included is some of the standard software including Adobe Photoshop Elements and Nik color Efex Pro.

The Bamboo Pen and Touch attaches to the computer with a USB port, it isn’t one of those devices that plug in and works right away, but you do need to load up a little software. From there, there is a tutorial that lets you know exactly how to use it. Just to let you know, the rotating and shrinking feature is concerned, it doesn’t really work with all programs.

You should be able to get the Wacom Pen and Touch tablet for about $99 from the Wacom site. 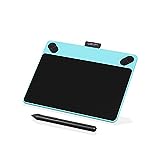