Why Every Guitarist Should Play The Ukulele

What do Jimi Hendrix, Brian May, Eric Clapton, and Pete Townshend all have in common? You guessed it--they play (or in Jimi's case, played) a ukulele!

I know, I know--it was a trick question. Made a pretty good point though, didn't I? Throughout the span of modern popular music, a staggering amount of famous guitarists have been known to pick up the ukulele every now and then. If they can do it, so can you!

If you're a guitar player looking to expand your repertoire of musical instruments, then the ukulele really does deserve strong consideration. Need more convincing? Ask and you shall receive, dear reader! Five reasons why every guitarist should also play the ukulele starts right...now!

All right, here we go. For real this time.

You Already Know Most of the Basics

Here's the deal: if you already know your way around a guitar, then you know the basics of most popular stringed instruments. It eliminates those first few annoying months of learning how to play something new--that dreaded "acclimation" stage. You've put in the work, and your prior knowledge acts as a well-deserved "cheat sheet" of sorts.

I know what you're thinking. Given this logic, the same principle applies to a bevy of instruments: banjos, mandolins, dulcimers--even violins. So why single out the ukulele?

One word: tuning. The most common ukulele tuning is as follows: G, C, E, and A. Sound familiar? It should--they're tuned to the same intervals as the four thinnest strings on a guitar. You could essentially emulate the tuning of a ukulele by placing a capo on the fifth fret of your guitar (and ignore the two lowest strings).

Long story short, most chord shapes are going to be the same, and you already know how notes on each string work in relation to one another. This is convenience at its very finest.

But with that said, simply thinking of a ukulele as a "mini-guitar" doesn't do the instrument justice. Though it shares several traits with its (usually) larger, six-stringed sibling, the ukulele is an entirely separate animal altogether. Let's break down the most obvious differences:

Moral of the story: while you can absolutely leverage your guitar experience onto a ukulele, they aren't one and the same. Ukuleles have their own distinct sound, and they are philosophically unique. If you've never played a ukulele before, you won't be blasting out a rendition of "Eruption" overnight. I haven't even mentioned the fact that they're strummed differently (by the way, they're strummed differently), but this kind of information is best left for instruction manuals and the like.

Believe it or not, this is still beneficial. Why? Because learning how to play the ukulele will still be challenging, and by default, a rewarding experience.

Guitars are pretty mobile instruments. They're easier to lug around than, say, a grand piano or a harp. But they aren't perfect for all occasions and situations. Like, for example, when your friends ask you to bring your guitar to the party. It sounds like a great idea at first, only to realize later on you'll be babysitting your axe all night while everyone else is off doing whatever they like. Talk about a buzzkill.

Extreme example? Sure. Either way, moving a guitar around isn't difficult, but the process still requires a moderate amount of planning. Anyone who's had the pleasure of carrying one around for hours on end knows exactly what I'm talking about here.

Ukuleles, on the other hand, are extremely portable. They take up very little space, they're super light, and can easily be stowed away when not in use. And travelling with a ukulele is awesome--you probably won't even need to make special accommodations, since most will fit inside of a suitcase (hardshell case and all).

Something else to consider: when moving around with a ukulele, you'll have the added benefit of having a "full-sized" instrument on hand. Try playing a show with a "travel sized" guitar without getting funny looks from the audience.

You Will Make People Happy

The ukulele is a beautiful instrument that makes beautiful sounds. There's just something ridiculously endearing about it--even the dreariest of minor scales sound uplifting on a ukulele. A well-played uke will almost always make people smile.

It's a relatively cheesy idea, but think about it for a moment. Why else do we play musical instruments, if not to entertain? I'm not saying that guitars don't make people happy as well, because they certainly do. But if people know you as a guitarist, imagine their surprise (and delight) when you pull out your uke give them something a little different for a song or two.

If you're still skeptical on the entire matter, look no further than the current resurgence in ukulele popularity. There's a reason why Israel Kamakawiwo'ole's medley of "Over The Rainbow/What A Wonderful World" became a radio staple at the turn of the 21st century. It's the same reason why Jake Shimabukuro's virtuosic renditions of classics like "Bohemian Rhapsody" and "While My Guitar Gently Weeps" went viral in the mid-2000s. People love the sound of ukuleles. 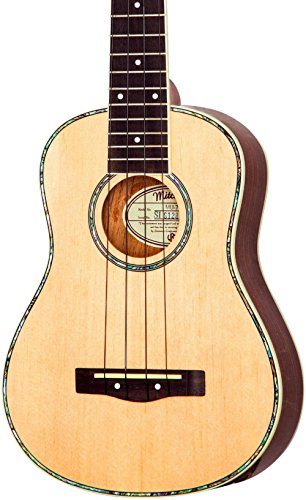 Okay, cheap isn't the right word here. Allow me to rephrase: ukuleles are relatively inexpensive. You can get your hands on a decent one for less than $100, or, in other words, roughly the same price as a non-boutique effects pedal. The barrier of entry is almost financially non-existent, at least in comparison to other instruments.

With that in mind, remember that you always get what you pay for. Though ukuleles do veer towards the cheaper (there's that word again) side of things, you don't want to end up with a lemon. As a general rule of thumb, if the price is too good to be true, then it's probably too good to be true.

If you're more interested in premium-quality instruments, and/or if your pocketbooks allow it, ukuleles can get quite expensive. But don't sweat it if you can't afford a Lanikai Hawaiin-made Solid Koa beauty (they run for $899)! The point here is that you don't need to spend a lot of money to get a great ukulele. I personally play a Mitchell MU70 concert sized ukulele ($99.99), and it works great for me. It stays in tune, sounds great (not the loudest, but certainly not quiet), and it looks like a tiny acoustic guitar--what's not to love?

Are you going to learn how to play the ukulele?