Why Do People Love Epic Rap Battles Of History On Youtube?

E.B. Black is a woman in her thirties who loves Youtube, Tiktok, Facebook, and all things related to internet culture.

What Are "Epic Rap Battles Of History"?

Urban Dictionary defines rap battles as "having a rapping contest against someone else in front of an audience, where most of the lyrics are insults directed at the other rapper which have to rhyme at the same time." Link: http://www.urbandictionary.com/define.php?term=rap+battle

In Epic Rap Battles Of History, people dress up as famous historical figures (some are still alive, some died recently, some a long time ago) and compete with each other in a rap battle while pretending to be these historical figures. Some of the historical figures are fictional, like there's one with the Ninja Turtles in it and another one with Romeo and Juliet. Most of them are real, for instance, there is Stephen Hawking in one video and Thomas Jefferson in another. But all will probably be familiar to you. You may not know a lot of details about all of them, but they'll probably all still be recognizable.

It's funny and entertaining to see historical figures fighting each other in this context (especially since several of these figures never got the chance to meet.) This is true for many reasons, which I have listed below:

Since Martin Luther King, Jr. and Ghandi were both pacifists with similar messages, you wouldn't expect them to fight each other under any context. But "Epic Rap Battles Of History" has some great writers. Instead of being intimidated by their pacificism, they use it their advantage to create a great product with amazing lyrics. Ghandi and Martin Luther King, Jr. fighting over who can be the nicest to each other? Genius, in my opinion, and it makes sense.

They also always have subtitles in every single one of their videos, so you don't miss out on any of the great lyrics. A lot of the rappers get so fast they're impossible to follow after awhile, but luckily, the people who produce these videos thought of that problem ahead of time.

People love to remember the past and things they used to love. It reminds them of happy memories and good times. Through "Epic Rap Battles Of History", you can enjoy some of these memories in a new, entertaining way!

3. Seeing People You Love Battle Each Other

Seeing the Kings of music battle each other was amazing. This was never a scenario that could have happened in real life, but Epic Rap Battles made it possible. They do this with a lot of historical figures and it's very exciting to watch.

4. Seeing People You Hate Battle Each Other

Since rap battles are about two people tearing each other down, it can be a lot of fun to see people that everyone hates tear each other down. It's clever, funny, and some may find it offensive, but that's also what makes it great.

Everyone has had one of those conversations, like,"If the Hulk were to battle Superman, who would win?" It's fun to debate what fictional characters would do in certain scenarios.

"Epic Rap Battles Of History" pits these kind of characters against each other to help us figure out who would win. Every video challenges you, in the end, to leave a comment about who you believe has won.

6. Because They Want To Laugh

Most people understand that these videos are parodies of historical or fictional characters. They're meant to make us laugh and want to high five the rappers over the lyrics.

Either the people at "Epic Rap Battles Of History" have a lot of connections or a lot of money or both. They are able to hire real celebrities who have made their careers in rapping. They have elaborate costumes and green screens. You can tell they do their research and must have a team of writers/producers and at least one director who creates everything.

I've seen some people try to imitate them. Most of them fail. They don't have the right sound equipment or studio or whatever for it. This channel knows what it's doing.

The people at "Epic Rap Battles Of History" do good research when creating their videos. I appreciate this because there are a lot of parodies out there that try to make fun of something and flop because they don't really understand the product they are trying to mock. It just isn't funny.

And if you enjoy watching "Epic Rap Battles Of History", but they happen to use a character or two in a video that you know nothing about, you might learn something through watching the video and have fun doing it.

Listen To Epic Rap Battles Of History On The Go! 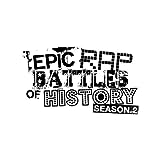