Windows VistaTM finally released to manufacturing (RTM) service pack (SP) number one (1). According to Microsoft this will solve a number of problems, as service packs normally do, and add some missing functionality.

In a nutshell this is Microsoft's final release of Service Pack one and is referred to as an Release to Manufacturing (RTM) e.g. the final release with no further improvements planned. This means that any further enhancements of Vista will be delivered in the next (if any) service pack.

This hub will address the most notable enhancements to the Windows Vista Operating System. The size of the download or file (may require a CD from Microsoft) and a link to the Microsoft Service Pack 1 document (PDF).

Note: Windows Vista SP1 will not be available to the computing public until sometime in April 2008.

The major items covered in this service pack release are;

1 BIOS stands for Basic Input Output System. This is the boot up from a permanent memory mounted on the computer's mother board. EFI stands for Extensible Firmware Interface and it serves a similar function to BIOS. Allmost all Windows based computers use a BIOS or EFI.

2Whenever a major error occurs in Windows you, the user, typically see a dialog box that asks if you want to send the error to Microsoft or ignore it. This is the visible face of the Windows Error Reporting System.

3A zip file or folder is a compression method pioneered by Phil Katz in response to a lawsuit he was a party to over PKARC software. The Katz version was actually more efficient and became a de-facto standard in file compression and archiving.

4Remote Desktop Protocol is a Microsoft server service that allows a user to connect to another computer's desktop, effectively allowing that user to remain in his/her own operating window while running applications on a remote computer through it's own windowed desktop.

5As most Windows users know when a major update occurs, like the weekly Tuesday update, Windows often instructs the user that it needs to reboot the computer to complete the installation. This typically means some core (kernel) process has changed and that kernel is loaded on bootup.

6 Installed memory is the actual physical memory installed on a computer and can be seen and reported on by selecting System Properties / General. Available memory is that portion of the physical memory available above and beyond the kernel software and operating environment (Windows itself).

7This is also known as solid state memory or solid state device. Your USB flash card or flash stick is such a device. To date the problem with flash storage has not been one of write speed, but rather re-write speed. e.g. erasing from a flash device takes longer than an erase from a disc drive. This is due to the way the flash drive file system is layed out and the way erasing is handled. Hopefully exFAT will address this. We shall see.

Also supported in Service Pack 1 are;

Most users should experience performance improvements such as; better web-page throughput, improved power management, and improved directory move performance for directories with a large number of files in them.

The speed improvements break down as follows;

There have also been improvements in the Windows Security;

In fact the list of improvements and changes is so long it takes up over forty (40) pages of a fifty-five (55) page notification document called Notable Changes in Windows Vista SP1. Note: this link is a PDF file.

If you are a longtime Windows users you know all about service packs. They are typically quite large, take hours to install, and often make substantial or minute, but disturbing, changes to your operating environment.

Windows Vista SP1 promises to be no different.

If you are a home or small business user you should be able to handle the upgrade through Windows Update. The service pack size for these users will run about 65Mb.

If you are a system administrator you are looking at about 450MB. There is also a 550MB version that includes about thirty-six (36) supported languages.

New computers will include the service pack.

Users without Internet access will need to order the 450Mb version from Microsoft which will come on a CD.

Current reports are that a typical 65MB service pack 1 install takes about an hour and requires five reboots.

Reports from the Field

Reports from early adopters (news media folks that Microsoft early released SP1 to) report that a typical 65MB install (see image gallery at right) takes just shy of an hour and requires five reboots. I am also hearing of some improvements after installing Windows Vista SP1.

But the reports don't quite jibe with the figures given by Microsoft. In one case Microsoft claimed that file transfer performance would increase by twenty-five (25%) percent when copying a large number of files from one folder to another on the same computer. My calculations say this improvement is closer to twenty percent (20%); perhaps Microsoft's figures are 'best case scenario."

When copying a small number of files (less than twenty) the performance improvement rated about five (5%) percent, not twenty-five (25%) percent.

Supported Languages: Windows Vista SP1 supports only five languages at this date. English, German, Japanese, French, and Spanish. Other languages will be supported by April. This means that if you have language support installed for any other than the five listed above you will have a problem installing Service Pack one.

To rectify the problem go to the control panel, Regional and Language options and uninstall any "non supported" languages.

Minimal Reboots: Apparently fewer reboots are required on newer machines. This can only mean that incremental versions of Windows Vista is installed on various machines by date.

A Relatively Painless Upgrade: As reports continue to come in problems with the SP1 install seem to revolve around unsupported hardware and language installations. With these issues addressed the install appears to be one of the most pain free in recent memory with fewer and fewer issues reported.

Some installers will have to bring Vista up to date with pre-install upgrades. This is why using Windows Updater is recommended. The updater will identify and correct (if allowed) the pre-install issues.

Undocumented Upgrades: Though there are no specific reports on this there's little doubt that Microsoft is also addressing security issues on Vista without actually stating what they are. This should come as no surprise since the same approach has been used on XP.

A general list of fixes and a count is listed below. The actual count is 551, but only 538 of those fixes are listed. Is it possible that the other thirteen (13?!?!) are security related?

Windows Vista SP-1 is now available via Windows Update. To run Windows Update run updater as you normally would. If you cannot run the SP-1 updater you may have one of the following problems.

Review this whitepaper for information on possible blocks to the SP-1 install.

If you want to download the full SP-1 five language standalone click the link below. Warning: This is 435 MegaBytes in size. 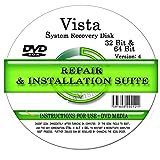