This review has some of the best scientific and graphing calculators and a buying guide with all the "need to know" information to help you make your final decision.

Check what size display suits you best. The simplest calculators offer a one or two lined display but the better ones offer much bigger, multi-line displays which can be useful when solving equations and necessary for visualizing graphs.

Texas Instruments Nspire CX CAS Graphing Calculator
- Easy to read with a back-lit, colour screen with crisp images which can be read in all lighting conditions. - Large screen size and very slim body - Very fast processing with a new operating system called "3.1" which performs calculations and produces even 3-D images very fast. - Huge 100 MB storage memory ("ROM") / 64MB operating memory ("RAM") - The only graphing calculator that is Rechargeable via plug adaptor or USB! - Approved for use in many official exams and tests.
Buy Now

A key difference between scientific calculators is how much memory is available to the user to store equations, applications, vectors and formulas. This is often referred to as ROM memory.

RAM memory, in contrast, is how much memory the calculator can use while performing calculations. A low RAM memory can mean slower processing times.

One of the calculators with most ROM memory is the Texas TI CX CAS with 100MB, as well as 64MB RAM memory.

Bear in mind that if the calculator comes with an SD port, you can also really boost your memory using that - many calculators, such as the HP 50g accept SD cards of up to 2 Gig.

Important! You'll have to buy the SD memory card separately. 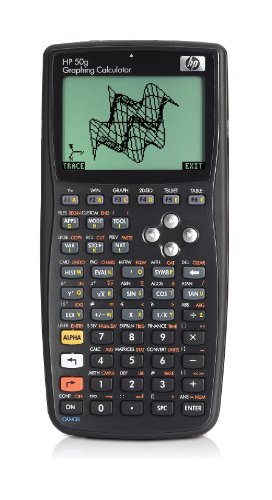 HP 50g Graphing Calculator
A very powerful calculator with thousands of functions and usages, with USB, SD and infra-red connectivity. The SD capability is particularly useful as you can expand the calculator's storage memory to a massive 2 Gig.
Buy Now

The best scientific calculators come with many functions, basically the more you spend the more complete it is going to be. However, if you know for sure you won't be using even half of the functions the calculator offers, save some money and buy one with less!

Top-end calculators offer programming functions to solve very complex problems and automate procedures (many of these programs can be downloaded from the Internet) and graphing functions so that you can solve Maths problems using graphs.

- Rapid access to constants such as pi and "e"

You'll be wanting to transfer files to and from your scientific calculator in order to use them on your computer or as a way of managing the memory left on your calculator.

The best calculators can be connected to your computer via a USB port, which is the most practical option and the USB cable is usually included with the calculator.

Another common connectivity option is through an SD port, which is a good way of boosting your memory at the same time. Check if the SD card is included or buy an SD card separately (especially if it is a gift!).

Many scientific calculators offer another port with which to connect two similar calculators together directly (without using a PC).

Some scientific calculators also offer an infra-red port but at the time of writing, wireless range was very short (10cm on the very best calculators) 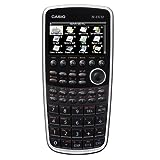 Casio FX-CG10 PRIZM Color Graphing Calculator (Black)
The first-ever graphing calculator with a color screen (LCD, 65,536 colors), making graphs, equations and all your calculations easier to understand and much more attractive! Introduced the new Picture-Plot function which allows you to feed your calculator with real-life images and videos and create graphs over them. USB capability.
Buy Now

- Algebraic is the standard entry mode for scientific calculators.

- RPN (Reverse Polish Notation) is more complex but when learnt can save you keystrokes and thus time. Offered by HP models.

- Mathematical Display means that equations can be entered as written. Casio used to call this Natural Display or Natural Textbook Display but now uses Natural-VPAM; SHARP calls this WriteView or Equation Editor; for HP this translates as Equation Writer.

The more basic scientific calculator models use a combination of a regular lithium cell and a solar cell, whereas the more powerful graphing calculators will use AAA or AA alkaline batteries (sometimes in combination with lithium battery cells) to power the larger screens, which either have to be constantly replaced or recharged.

The Texas TI CX CAS however has completely changed this with its internal battery that can be recharged just like a mobile phone - you just plug it into the wall with the battery adaptor included (or through the USB port to your computer) and it will re-charge itself and lasts up to 2 weeks on a single charge.

All three major brands, Texas, Casio and HP, offer great support on their websites where you can take part in workshops, download programs and watch training videos to learn how to make the most of your scientific calculator.

What Scientific Calculator Do You Have?