Looking for a tablet under $300? Last year you might have been out of luck, but in 2015 there are a lot of great new tablets right around that price range.

This article is about the best tablet out there for less than three hundred dollars and includes reviews for both the new kindle Fire HD and the Nexus 7. Once you're finished reading my review be sure to vote on what you think is the best tablet under $300 and leave a comment with any insight you may have.

The All new Google Nexus 7 is a unique tablet that should definitely be near the top of your list if you're shopping for a tablet in the under $300 category. With a blazing fast quad core Tegra 3 processor applications and movies load just as well or better than any other tablet on the market today.

At 1280x800 HD, the resolution of its 7 inch display is on par with other tablets in its category and the freedom of having the Jelly Bean 4.1 Android OS is more appealing to some than the Kindle Fire HD's more restrictive system. (You can see my comparison of the Nexus vs. the Kindle Fire below.)

Overall: You can't go wrong with the Google Nexus 7. It feels like a smooth operation without all of the fluff. It kind of reminds me of when I switched from Internet Explorer to Chrome. If you're in the 7" tablet space in late 2012, then you really should only be thinking about the Nexus 7 or the Kindle Fire HD.

Newly released for the end of 2012 is the Kindle Fire HD. The 7" 16GB version of this tablet is 200 dollars. I love just how lightweight and easy-to-use this tablet is. I currently use an Asus Infinity tablet, but I bought one of these for my Mom because she's used a Kindle in the past and she wanted the ability to browse the internet and keep all of her Amazon stuff in once place.

I originally thought that the Nexus 7 would be a clear cut winner over the Fire HD, but after using it there are a few advantages it has over the Nexus 7. The main advantage being storage capacity. At the $200 price range the Fire HD has 16GB while the Nexus has 8GB. The Kindle Fire HD also comes with dual band Wi-Fi for up to 40% faster downloads and surfing. In addition, you also get free Amazon Cloud storage and a superior Dolby Audio dual-driver stereo speaker system for virtual surround sound.

The touch screen is more responsive than other tablets, making it easy to flip through your favorite books and your movie list. Amazon Prime members also enjoy commercial-free streaming of 10,000 movies and TV shows. Like the original

Kindle Fire HD this has a fast dual core processor. It's not quite as smooth as the Nexus quad core; however, you can rarely tell a difference in most practical situations.

Those looking to choose between the Nexus 7 and the Kindle Fire HD may find it to simply be a choice of Processor Speed vs. Capacity or the Android Jelly Bean OS vs. Amazon's slightly more restrictive Android-based OS. 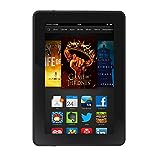 Which New Tablet Under $300 is the Best?

Voice Your Opinion Below.

I tried out a few different tablets to broaden my horizon and make sure the Kindle Fire was really the best one. The other tablets were actually not that bad. The Coby Kyros and Pan Digital tablets were less than one hundred dollars and had many positive reviews from customers on a variety of manufacturer websites. Complaints for some for these particular tablets included slower internet, and a slightly less responsive screen than the Fire.

While I did find them to be less responsive than the Fire, they are still a pretty good value. Still, since I plan on spending a considerable amount of money on applications, movies, and music I wanted to have something that I really enjoyed using, and I couldn't say that about either the Coby Kyros or the Pandigital Novel Models.