Intel's fourth generation Haswell processors were recently released and with them we now have a good variety of Z97 chipset motherboards to cover. These boards feature strong overclocking features and compatibility with SATA Express and M.2 PCIe drives.

In this post I'll cover both the compatibility of these motherboards as well as a few good motherboards available in each price range.

Intel recently launched it's 4th generation Haswell refresh processors and with it came Z97 chipset motherboards. I've been getting a slew of questions about whether it's worth it or not to upgrade to the newly released z97 motherboards right now. While I would recommend going with the new hardware if you're building a gaming PC right now, it's ultimately unnecessary for those who already have their rigs built.

Z97 motherboards are compatible with 4th and 5th generation Intel processors (Haswell and Broadwell). It allows for overclocking CPUs and addresses storage speeds. Specifically it brings PCIe bandwidth of 10Gbps (67% faster) by supporting M.2 PCIe drive and SATA express Storage device compatibility. While the availability of these drives is somewhat limited these products will most likely be available in force in the future.

Here's a look at my current 5 favorite Z97 gaming motherboards for the money starting with motherboards under or around $200, $150, $100 and then ending with a discussion on higher-end boards.

My favorite motherboard in this category right now is the Asus Maximus VII Hero. I was a big fan of the Z87 Hero which ultimately gave me everything I wanted for overclocking in a $200 board along with the durability and quality I expect from the ROG series.

Speaking of quality the Hero VII includes rear bracing heatspreaders, nickel-plated heatpipe, game networking, and premium audio capacitors and sound processing that's as good as a dedicated sound card. In addition the design of it, as you can see above, is quite stunning and even includes some amazing lighting effects that aren't shown in the picture.

Overall this is one of the better value boards in terms of features perhaps being beaten out by it's little brother the less expensive Ranger which gives very similar performance without lighting. 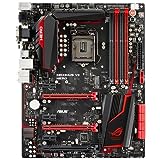 Another durable motherboard that's great for power users is Gigabyte's new GA-Z97X-UD5H. Like most motherboards in this price range it includes features like high performance networking, the new M.2 Onboard Connector and SATA Express connector. In addition it has quality parts like 10k durable black solid caps, 1 x Copper PCB Design, and a 5x Gold plated CPU socket.

Audio for this board is greatly improved over previous versions I've used and uses the Realtek ALC1150 Audio chipset. If sound cards were a thing of the past last year, then this year they're old hat. That being said some users have reported issues with the audio at 100% output.

This board is about $30 to $40 cheaper than the board mentioned above and gives many of the same great features. Which would I rather have? Probably the Hero, but I don't mind having extra money in my pocket either.

Other Top Performing Options in the $200 Category

If you're not looking to break any records, then the Asus Z97-A is a strong option at just under $150. That being said this mid-range is still a solid overclocker with plenty of options including 4 SATA III, and the new SATA Express and M.2 options.

This board lacks WiFI which might be a deal breaker for a few; however, for your basic PC that connects into the wall it still adds some of the best valuable available in the $150 price category by giving every power user the features they need without paying for those they don't really want.

Gigabyte ATX DDR3 LGA 1150 SATA DIMM 6Gb/s Motherboard (GA-Z97X-UD3H)
The UD3H is another favorite of mine and similar to the Z97-A in speed and features.
Buy Now

As I mentioned previously there are no huge CPU speed upgrades you'll get by switching to the Z97 boards. That being said functionality and overclocking features seem as good of a value as ever. If you're in the market for a new PC, then it's worth it, if you're still holding on to an Ivy Bridge Processor, then it's probably not.