I have wanted an iPad since the first commercial aired but I knew there would be no way I would get one because of the price point. Regardless I was resistant to any alternatives. This past Christmas on Boxing Day my husband came home with a Blackberry PlayBook Tablet that was on sale (FYI: I have never seen iPad "on sale").

I interviewed my husband to get his perspective on the PlayBook. My husband is a science and math teacher and represents the technical side of our relationship and if I ever need to buy anything substantial I like to have him along to ask the questions I might not think of (sorry, I don't loan him out). He is also a fanatical researcher before he makes a big purchase -- basically anything over $150 -- and knows the product before he buys.

What did you pay for the Blackberry PlayBook? I waited until the PlayBook (32 GB) model was selling for $ 249 (CAN). At this price it was a much better value than other tablets at the time.

How is it built? Many tablets were cast plastic. Not the Playbook. It has a metal body that is nice and rigid to hold and the finish (edges) are very refined. The screen is nice and bright and its ability to play Flash was certainly a bonus.

What did you like about the size? The 7 inch screen size is a perfect fit to hold. It is about the same size as a large book and isn't too heavy, making it very portable.

What is the BlackBerry Bridge? If you own a BB phone this feature is very nice. It allows you to link both phone and tablet together so that the non-cellular tablet now enjoys wireless access (tethering without tethering charges) and activates BBM, mail, tasks and calendar features from your phone on the tablet.

How is it for doing more than one thing at a time? A true plus. This tablet is great at multitasking. I can run many apps simultaneously and move between them easily without closing any of them.

What is side loading? For the more techno savvy, the PlayBook allows users the ability to add specially packaged Android apps.

What would you change about it? It would have been nice if BlackBerry was able to continue to support it and deliver on the release of BB10 for the Playbook as this would have been a fantastic update.

Anything else you can think about it? This little tablet is great for browsing the web, watching videos, reading books, doing mail or playing the odd game. There are not 100 000's of apps in the store, but if you can find one of these I would highly recommend it.

We had an issue with the camera, both video and picture after a major update and BB replaced the tablet even though it was out of warranty. Excellent Customer Service!!

Why have you outgrown it? I've moved up to the Surface RT by Microsoft as it offered me a little more of what I was looking for: Full MS Office (RT version), integration with home network, same UI as my desktop/laptop Windows 8.

As I mentioned in the intro, I wanted an iPad. I was resistant to playing with the playbook and told my husband I had no interest whenever he offered to let me check it out. Then one day he passes it to me and says, I downloaded this game for you. Plants and Zombies -- hooked.

From the zombie game I ventured into book apps like Kobo and iBook (yep, there are Blackberry apps for both of them. I read a whole series of books by Amanda Hocking on Kobo within a few weeks -- I was suddenly hooked on ebooks -- something else I have been kind of resistant too in the past. I downloaded Twitter and Facebook apps to help keep me up to date on my friends. And yes, I downloaded more games too.

The Blackberry Playbook has officially been handed off to me and I am quite happy with it. Unlike my husband I do find it heavy at times if I am playing a game for a while but I like the weight and thickness of it when I am reading and the adjustable screen settings. It took me a while to adjust to the top and bottom screen swiping but that is only because I am so used to my iPod Touch (which they will have to pry from my stiff cold dead hands). With the Playbook in hand I am less inclined to want the iPad I thought I wanted although sometimes I am saddened that some of the apps on my iPod are not available on my PlayBook.

One of the most important things in owning a tablet is protecting it. Two of the best things to safeguard it are a carrying case -- it is going to get dropped at some point no matter how careful you are. When I dropped mine I was so thankful it had a case to protect it. The next thing is a protective screen to keep it clean and decrease scratching. 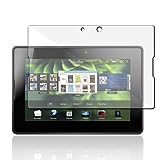