Lights have a long history

I still remember my childhood, at that time my parents used to carry the torch when they went to the field at night. It was the 1970's, at that time there was no electricity in our house. It is in 1977 that the electricity supply started in our village. At that time the torch was a very valuable asset in a house. Not only for my parents, but also to most of the people in the village, who were using a 5 battery torch which was almost one and a half foot long. They used to carry it in a customized bag with a long shoulder strap. It was to ensure that it will not slip off from the hands at night when they move around the field.
Other than this, we had only kerosene lanterns, which were popularly nicknamed as "chimney" and the kerosene oil put to light it was popularly called "chimney oil". It would light only one to two meters around it and there was an anecdote - "bottom of the lamp is always dark" as it had a
wick at the top, with its fuel container mounted on a stand. Thus, the bottom area was always dark. This anecdote was used to similize some of the dull kids of a wise-man.

Later on, when in the 1980's the emergency lamp has come into the household use. Though it was very heavy due to the acid contained lead-acid battery inside, it was chargeable and portable. It was very useful for the children to read and carry it on to the fields during the night walk. There were twin tubes of fluorescent type in those emergency lamps. About the 20 years ago our state was suffering from a severe power supply shortage in the summer.
It was a time when the incandescent lamps and fluorescent tubes used to illuminate even the boundary walls. The craze was very much prominent in the roadside households.
The entire country was struggling to manage the power management issue. Kerala had some hydroelectric power generators. There were thermal power stations in Tamil Nadu and Karnataka, but still, we were sometimes dependant on electricity from Andhra Pradesh power grid. Around 30-40% of electricity was consumed for household lightings alone, at that time.

LED lights and Lithium-polymer batteries together have brought in the portability of lights practically true and very much effective. Now, LED has entered almost every illumination sector from handheld, household, outdoor, playground, disaster management sights, showcases, panels, automobiles, railway engines, airplanes, underwater illumination including fountains, mobile phones, camera flashes and floodlights, insect traps, TVs, wild animal deterrents, etc. Now even portable lighting towers have come in the market.
Unlike incandescent light bulbs, which were rated in Watts indicating power consumption, LED lights are measured in terms of luminosity of light in lumens.
Overall, now LEDs are available to suit every occasion where illumination is required. Solar photovoltaic panels and LEDs have made the burden lessened for the electricity departments of the states and proved that the world cannot be blacked-out due to lack of functioning of the power grid.

Use of latest technology 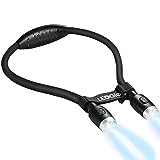 Lights for every occasions

LED lights are safe on the eyes as they emit pure white light of around 450nm range. It does not have blue or UV light, which is harmful to the eyes. For a reading light luminosity of 450 to 600 lumens is recommended. A low-intensity light and too bright a light will diminish eyesight.
So, a good LED light would not only have a worthwhile long life but also give a good productive life.