Giovanna is passionate about adventure travel and leaving no footprint. She is hopeful, but a few years seems too short to save our planet! 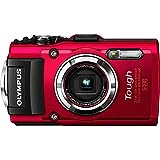 A few years ago our search for a quality digital camera was on with Christmas just around the corner.

My son was about 10 years old and started asking for a camera of his own. But he wanted bells and whistles, a camera that looked cool, and could cope with everything he could throw at it. So I spent a lot of time on line researching what would be the best camera for him.

That's when I discovered the Olympus Tough a brilliant camera that ticked all the boxes and more!

Please don't think that the Olympus Tough is for kids - it certainly isn't, it's for people who travel and live adventurously and need a camera that can take a bit of rough. Have a look at the video below and you'll see what I mean.

I have posted a couple of the films my son has made below too I hope you enjoy them!

It was time my son got his own camera and these were his specific requirements:

He wanted to film the fish in the river so the camera had to be a waterproof digital camera. Below is the first film he ever took underwater. It's rather shaky because he's trying to film a fish at the bottom of the river. If you listen carefully you can hear him breathing!

He also wanted to make stop motion cartoons as well as full-length adventure movies! So he needed a digital camera with a good lens and good sound pick-up.

This camera does those two things very well. But it is more than that because it is designed for people who are on the go. They have made it durable, thus it's name Olympus Tough. It has a shock-absorbing, rugged body so the camera can cope with being dropped from a height of a 6.6-foot! It is completely sealed so it is dust proof, shock and freeze proof, and most importantly for my son it is waterproof it can actually take photographs under water to a depth of up to 33 ft.

It is that it is easy to use too, and my son learned how to set the programs very quickly. It is a user-friendly camera great for inexperienced photographers as well as photographers who will put it through all its paces.

So this camera has a shock factor. Once we were visiting Kew Gardens, in London, and my son dangled his camera into a pond to film an enormous carp. You should have heard the gasps from people standing around as it sank ever deeper into the murky water! They were even more amazed to see that I was calmly letting him do this without screeching 'stop it - you'll ruin the camera!' - being a cool mum for a change felt so good! That became the first in a series of tricks he played on people!

You should see people's faces when he deliberately drops the camera! Once he dropped it on the rocks at the seaside and astounded everyone when he casually picked it up and continued using it.

It certainly is a tough cookie and a lot more than just an ordinary digital camera.

I highly recommend this camera and it would make a wonderful gift for anyone who is looking for fun.

The Olympus Tough is 5X Optical/10X Super-Resolution Zoom and has built-in iHS. It will cope with the toughest shooting environments and is professional grade durability

This is the very first stop motion film he shot. He made his own clay models and the set was part of an instruction book I bought him. I never really imagined that he would have the sticking power to actually make a film. But he did it took him lots of concentrated effort. Then he learned how to edit and add music etc using my Imac.

I was very impressed with the finished product.

He used my tripod to keep the camea still and painstakingly moved the clay characters in order to achieve the illusion of movement. It just goes to prove that there's nothing like hands on experience - he learned all that skill in his spear time working in his bed room!!

Here's a film he shot about Christopher Columbus. He worked with his dad and they were in our bedroom with ordinary lights. Low tech but the camera worked very well indeed.

Have you found this lens informative? Please leave a comment before you go. Thanks for your visit.