What is an Android Mini PC?

It all started with the Raspberry Pi, a tiny computer that sparked the interest of Linux enthusiasts around the world. However, ever since its launch, there is a huge shortage of the Raspberry Pi and buyers had to wait for months to get their hands on one.

Then came the Android Mini PC or as some call it, Android-on-a-stick. These are tiny computers that run on the popular Android OS which you plug into a HDMI display or TV. There were many models that came and went but the most popular version by far is the MK802 Android 4.0 Mini PC. The Android Mini PCs created a whole new category of computing devices.

That brought about another wave of similar devices all having more or less the same hardware and features. However, it must be noted that the Uhost, a product that is very similar to the MK802, came out about the same time as the MI802. In fact, the previous version of the Uhost was released in 2011 while the current version was released slightly before the MK802.

I happen to own both the MK802 and the Uhost and used both quite extensively. Furthermore I have written lengthy reviews of both devices which can be found here and here. While both these units have many similarities, they are also different enough to warrant a full comparison. Find out which is the better buy.

I update my Squidoo articles on a frequent basis with new information. Follow me on Twitter for update notifications on my Squidoo activity.

The Uhost is a well designed Android Mini PC that holds many advantages over other similar products plus it has a few extra features that are not found on others.

"I would highly recommend this device to anybody who likes to tinker with Android hardware. It appears to have massive potential as a low-cost internet TV device and I cannot wait to dive into the software to start customizing it."

MK802 and Uhost: The Similarities

Both models also come with a mini USB OTG port that can be used for power and a full sized standard USB 2.0 port for connection of USB devices such as mouse, keyboard and external USB storage devices. There is also a micro SD expansion slot that supports storage cards up to 32GB.

Physically, both the MK802 and the Uhost are quite similar in size with the Uhost being fractionally wider and longer but slightly thinner. The Uhost is heavier but with only a 10g (less than half an ounce) difference in weight between the two, it is insignificant.

MK802 and Uhost - The Differences

The OS seems to be a little better optimized on the Uhost as scrolling or switching between screens is smoother. A good example of this is scrolling the video wall on the YouTube app or scrolling the game screen in Angry Birds. On the MK802 there is a little more lag and the scrolling is more jerky.

Boot up is also faster on the Uhost taking less than a minute while on the MK802, averagely it takes about 90 seconds. Shut down is also made easier on the Uhost with the addition of a power off button on the menu bar. The MK802 has no similar function and it can only be shut down by cutting off the power.

Uhost has full access to the Google Play Store

The Uhost comes with not one but two customized launcher screens. The first one looks a lot like the dock on Mac OS X with icons that scale up when the cursor hovers over them while the second has the same icons arranged in a circle. While there is nothing really special about the launcher screens as there are no widgets but the big icons make much easier to navigate especially if you are using an air mouse or touch pad. On the MK802, it only comes with the default launcher but being an Android device, there are tons of alternative launchers that you download and replace the default launcher.

The customized Uhost launcher screens are obviously designed to work with the optional air mouse remote control that you can optionally purchase together with the Uhost. The Uhost itself has a built in receiver for the customized remote control and does not require an additional USB dongle. The MK802 has no optional remote control but it does support most 2.4 GHz wireless keyboard/mouse or combo device by connecting the wireless USB dongle to the USB port on the MK802.

There are other significant hardware differences as well. The build quality of the Uhost is better than the MK802. With the matte black surface, it also feels like a better quality product. The embossed labels for all the ports and connectors and the lack of garish Android mascot also makes the Uhost seem classier.

Connectors, ports and buttons on the Uhost

The Uhost has a built in male HDMI connector while the MK802 has a female mini HDMI port. This means that the Uhost can be connected directly to the TV without the need for an additional cable although the box did come with a HDMI extension cord. This design is similar to the MK802 II that also features a male HDMI connector.

The Uhost is powered via the mini USB OTG port. A double headed USB cable and a USB power adapter is supplied together with the device. This means that you can power up the Uhost by connecting to a USB port on the TV and if it is not drawing sufficient power, you can plug in the additional USB connector to a second USB port on the TV for double the power. You can also use the USB power adapter and power the Uhost from the mains.

Connectors and ports on the MK802

The MK802 also has the option to be powered from the mini USB port but it only comes packaged with a normal mini USB cable instead of a double headed one. However, the MK802 has a dedicated power port that you can connect to the mains with the supplied power adapter. The advantage of this is if you use the power adapter, you have 2 free USB ports on the MK802 compared to the single free USB port on the Uhost. To make matters worse on the Uhost, it did not support the USB hub that I connected to it. I had no problems connecting the same USB hub to the MK802 and getting it to work with multiple USB devices.

The Uhost has a button marked as the Udisk button. Pressing the Udisk button while connecting the Uhost to a PC via a USB cable allows the Uhost to function as a USB drive and allows you to access to the built in storage and the external storage micro SD card from the PC. This makes it easier to transfer files or side loading apps on the Uhost. The MK802 does not have this function.

The MK802 has been plagued with two major problems that are widely reported on user forums. The first problem is overheating. Users have been complaining that the MK802 runs very hot especially when running over prolonged periods. I have seen reports of the MK802 failing or even melting due to the heat. Some users have resorted to modding the MK802 by adding heat sinks to it.

When I first received my Uhost, I was very surprised to find no ventilation holes on the casing of the device. However to my surprise, the Uhost does not run hot at all. It only gets warm to my touch at most even after hours of watching high definition content on Netflix. I don't know how the Uhost dissipates the heat but I tip my imaginary hat to the designers.

The second major problem is WiFi interference. I did not personally encounter this problem with my MK802 unit but there have been many reports of MK802 devices not being able to connect to WiFi although the router is located right next to it. There were also reports that high ESD emission caused interference that blocked other WiFi devices from connecting to the WiFi router. The Uhost did not have any WiFi related problems as far as I can tell. It connected quickly and the connection is stable.

Based on the above, it is obvious that the Uhost has many advantages over the MK802. The better performance and extra hardware and software features makes the Uhost an obvious winner in this comparison. The only 2 areas where the Uhost loses out to the MK802 is the lack of a dedicated power port which makes the Uhost one less usable USB port and the fact that it did not recognize my USB hub. I will have to test it with other USB hubs to check on the Uhost's support for USB hubs.

I got myself another unpowered USB hub and this one works fine with the Uhost.

The other matter that was not compared in the main article is the pricing for the two devices. The MK802 is a very popular device with many sellers on the internet and on top of that, there is a newer version of it called the MK808 Android 4.1 Mini PC that has a dual core CPU. Both these factors has caused the price of the MK802 to drop a lot in the past few weeks.

I originally bought my MK802 on eBay for just under $60 shipped but I have seen sellers selling it at under $45 shipped. The Uhost is not as popular and there are not many sellers. As a result, the best price that I have found so far is about $51 shipped. Personally, I feel that the Uhost is worth the few extra dollars.

However on the other hand, the Uhost is not just going up against the MK802 as its competitor as mentioned above, there is now an updated version with a dual core CPU, the MK808. However, the MK808 is fairly recent and sells for upwards of $80 on eBay. I have published a write up on the MK808 that you can refer to.

The MK808 is a very powerful Android mini computer that resolves most of the problems that the MK802 faced but due to its use of a dual core Rockchip RK3066 chipset it doesn't have the kind of Linux support that the Allwinner A10 based MK802 and Uhost enjoys. If you plan to run Linux, your best bet is either the MK802 or Uhost. 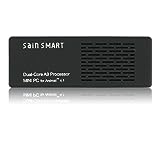 Please leave your comments here. I would love to hear from you.