Useful, Helpful And Free BlackBerry Apps You Can't Live Without

If you're a BlackBerry lover like me, then you're probably getting a little sick of hearing about all of the really cool apps that are now available for the iPhone. Unfortunately the iPhone was designed specifically with an open app platform in mind from the very beginning, so there has been literally thousands of apps created for it. But, the good news for BlackBerry users like you and me is that BlackBerry, although late to the game, is now allowing really useful, entertaining and helpful apps to be downloaded onto the device. They've even launched BlackBerry App World, which is a store that's dedicated strictly to downloading both paid and free apps straight to your BlackBerry. However, one of the biggest differences between the apps on the BlackBerry and on the iPhone is that you don't need to use App World to download most of the apps to your BlackBerry, but it makes the process a little easier to manage and lets you get all of the apps from one place instead of searching for each website to download them from.

I have yet to install any BlackBerry apps from their App World, but I have found and installed some really great free blackberry downloads that I now don't think that I could now live without. I use each of these apps every single day for one reason or another and if you are a BlackBerry user like me, you should check each one of these out, too. Also, one other thing that I should mention is that each of the apps that I list below are all 100% free, so you don't need to worry about shelling out any of your cash in order to download them. 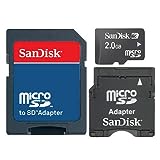 SanDisk 2GB Microsd Card with SD & MiniSD Adapters (SDQ-2048-A11MK US Retail Package)
If you begin to add apps, you should buy a memory card to hold your other pics, videos, etc.
Buy Now

Things To Think About Before Installing Any BlackBerry Apps

Before you start going all app crazy on your BlackBerry I thought that I would fill you in on a few things that I have learned as I've installed, used (and removed) several different applications on my BlackBerry. It's always good to set some expectations before venturing into something new, so I'll do my best to prepare you for the process of adding new apps to your own BlackBerry. But, no matter what happens, in the end you can always remove apps that you don't end up liking so you might as well try something out if you think that it's going to potentially make your BlackBerry more useful.

Your BlackBerry Can't Handle Much - Just because your BlackBerry can now run all of these different apps doesn't mean that you should be adding every app that you come across. The problem with adding a lot of apps (and the main downside compared to an iPhone) is that a BlackBerry can't handle very many apps at once. You see, your BlackBerry is great at reading email and doing some other fairly simple things, but it's hardware and software weren't really designed to handle running a bunch of apps at the same time. If you get too many apps installed you'll know it because you'll see the hourglass way too much and your BlackBerry will require restarts as it becomes overwhelmed.

You'll Need As Much Memory As Possible (buy a memory card!) - Your BlackBerry only comes with so much memory that you can take up, so if you're going to be adding some apps you should definitely buy a memory card so that all of your pics, images and other media can be saved off of your BlackBerry memory. This will open up more memory for your apps so that you don't run into performance issues while running your new apps.

These Apps Will Make Your BlackBerry WAY Cooler - I know that a BlackBerry is pretty awesome by itself, but after you install and run some of these apps that I suggest you're going to think that's it's way than you do know. Whether it becomes more useful, more entertaining or just more fun, your BlackBerry will never be the same (and that's a good thing).

More Apps Are Coming Out All The Time - It took BlackBerry a little while to jump on the app bandwagon, but now that they are there seems to be more and more apps available every day. So, even though I have recommended some of my favorite apps below, be sure to keep up with all of the new apps that are becoming available all of the time.

When talking about any type of new online technology you always need to include Google in the conversation and BlackBerry apps are no exception. Google has made some amazing apps that make your day-to-day BlackBerry experience much, much better. You can download the entire selection of these Google apps here and here are some of a few of them that you should add to your BlackBerry and that I can't live without:

Pandora BlackBerry App Is Music To My Ears

Ok, get ready because I'm going to start off big here. First of all, let me first say that Pandora.com is one of the greatest things to ever happen to me when it comes to listening to music online. I don't download a ton of songs and I don't even really listen to an iPod or anything mainly because I listen to Pandora on my laptop when I'm at work and at home and thanks to their new BlackBerry app, when I'm walking around I also listen to Pandora on my BlackBerry. I'll even turn on the Pandora BlackBerry app while I'm in the shower sometimes because the speaker on my BlackBerry is amazing. That might be a little too much information for you, but if you want to know this stuff, then you should probably know it all.

If you're going to get the Pandora BlackBerry app (which you definitely should asap), here are some things that you should know before you download and install it:

Unless you've been hiding in a cave somewhere the past year or so, I'm guessing that you have not only heard of Facebook.com, but you've probably also got a profile on there that you use quite a bit (well, I know that I do). Anyways, one of the problems with online social networks like Facebook is that in order to keep up with everything that's going on, you almost need to be anti-social so that you can stay in front of your computer all day. But, this is all changing now that Facebook has begun to launch apps on all of the major mobile platforms, including our much-loved BlackBerries. These new mobile apps allow Facebook users to still interact and keep up with the site without being tied down to their computer, which is really great.

Here are some thoughts and tips on the Facebook BlackBerry app that you should check out before installing and running it:

Although Twitter is just now gaining some momentum in the mainstream (thanks, Oprah!), it's an online messaging service that was actually made for going mobile, so having a good BlackBerry app for it has been very important for me. After searching around I have found two different Twitter apps that I have kept installed on my BlackBerry and for some reason I still use them both all of the time. These two Twitter BlackBerry apps are Tiny Twitter and TwitterBerry and here's some information on each one of them: