What is an iPod Touch?

All About the iPod Touch: A Guide for Parents and Grandparents

If your child has asked for an

iPod Touch, it's no wonder. These handheld devices really are marvels of technology. If you've asked "What is an iPod Touch?" you can lump yourself in with millions of parents around the world. Not to fear, you've landed in the right place. I'm discovering for myself what all the hype is about since I've just completed lessons in iPod 101 from my teenage daughter. She's been very patient while I ask her questions such as, "What does that thingy do?" and "How'd you do that?" etc. etc. I'm sharing everything I've learning here including a few videos we made together.

I could have also named this article, "iPods for Dummies" or "I have an iPod, now what?" That term "Dummy" is no reflection on the reader, it's simply the term I I searched for myself while researching to answer the question, "What is an iPod Touch."

This article is about the 4th Generation iPod Touch (newest model as of Feb. 2011).

I'm sure we'll see a 5th and 6th Generation at some point.

Please Particpate in this Quick Poll

What brings you here?

What is an iPod Touch (or any iPod for that matter)?

The MOST BASIC Explanation!

Remember how we used to listen to music? If you are old like me, you remember record players, then 8 track tape players, then cassette tape players and then music CD players. Well now there are little devices called MP3 players (an iPod is an MP3 player - a player that plays MP3 songs) that do the same thing these older models do, but the device is just a whole lot smaller and works differently. One of the main differences being that the music is not separate from the player. It is all one piece so there's no records, cassettes or CD's to keep up with! Most MP3 Players are sized to fit in your hand like a cell phone or even as small as a Zippo Lighter would be.

I think the closest comparison would be the old Sony Walkman cassette player. Remember those? You could walk around and listed to a Walkman with a set of headphones. It was all the rage because it was PORTABLE!

Not exactly to scale (but almost).

Most current models as of February 2011.

What's the difference between an iPod Touch and the other iPods?

One MAJOR difference and lots of small ones

The four different models of iPods are the:

The iPod Touch is different than the others because it has a touch screen. You literally touch the screen with your fingers to play a song or watch a movie or anything else under the sun. *Special note: The newest model (6th Generation) of the iPod Nano ALSO has a touch screen - but the Nano is MUCH MUCH smaller.

This video ended up much longer than we intended. In our defense, there is lot to say. If you want a thorough tour of the iPod, watch this video. If you are in a hurry, keep scrolling :-).

Note: We have one informational error in the video. The iPod screen is actually a "960-by-640 backlit LCD display" (better than we thought).

How much does an iPod Touch cost?

Three sizes - three prices. It depends on how many songs you want it to hold (in other words how much memory it has). Not just songs, but also movies and games you want to play. There are three different iPod Touch sizes. I don't mean sizes of the iPod itself - all 4th Generation iPod Touches are the same physical size - I mean memory capacity. The memory sizes are: 8GB, 32GB, and 64GB. What is a GB? It's a Gigabyte which is a unit of measurement for memory. So, of course, the 8GB will hold the least amount and the 64 GB will hold the most. But let me back up and say that the 8GB holds about 2,000 songs, 10,000 photos, or 10 hours of video so it's not that it's small by any means!!! My daughter is sitting here telling me it's actually NOT big enough, but come on - I personally would NEVER fill one of those up. If you are buying one for your child or grandchild - they VERY WELL MIGHT!

So back to the cost: You CAN order directly from Apple (the company that makes the iPod), but they are more expensive than other places. Why? I'm not sure. Amazon has the best price as listed below. Be sure to comparison shop, but remember, if you buy from a local store you will pay sales tax and sales tax on $200 to $400 adds up! At Amazon, you probably won't have to pay the sales tax and you'll also get free shipping. We bought ours from Amazon.

Apple iPod Touch MP3 Player - What the hype is all about

Apple iPod touch 8 GB Black (4th Generation) (Discontinued by Manufacturer)
At this link you have the option of an 8GB, 32GB or 64GB. Click for current prices on all three sizes.
Buy Now

Accessories to Protect the Investment - That's the Parent in Me Speaking! 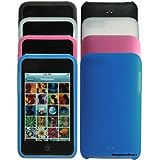 What can you do with an iPod Touch?

Lots of stuff - You won't believe it

You can listen to music, watch movies, play games and a whole lot more. The "more" depends on what you add to the iPod after you get it. What do I mean? There are these things called "apps" which is short for Applications. An app is like a tool. Let's say your iPod is a toolbox. It comes with a couple of tools already in it. BUT the great thing is that you can add lots of other tools that you want and need. Many of them are free! How do you add them? You get those tools (apps) from the iTunes apps Store. This is very easy to do!

Have you heard the phrase, "There's an app for that?" Well, it's true. There really is an app (or tool) for almost anything you want or need to do. For example, there's a calculator (not impressed?), there's a level (a mean a real bona fide carpenter's level - you don't believe me do you? See the video above at 8 min. in), there's an alarm clock, a way to edit photos (easily), lots of popular computer games, you can even send text messages from the iPod Touch (if you are near a Wi-fi hot spot - more on this later), a restaurant tip calculator so you'll know what to tip your waiter, there's even a flashlight (including an SOS strobe - not that you'll need that one), and my daughter's favorite so far is the frog breeding game where she breeds cute little frogs for colors, patterns etc. She says this is one of the greatest free Apps.

How do you put music on an iPod?

First, you have to have the iTunes program on your computer. It's free. Good News - Your computer may already have iTunes on it (but it might be an old version- it will let you know if it needs any updates). If it's NOT on your computer, you go to Apple.com and click the "iTunes" tab at the top, then look for the "Download iTunes" button. See picture to the right.

Through iTunes you add songs to the iPod. There are thousands of songs available to purchase (usually $.99 - $1.29 each). Basically you download the iTunes program to your computer, hook up your iPod Touch (or any iPod) to your computer with a cable and add your songs. Our video tutorial of exactly how to do this will be live in a day or two.

Other things you can add to your iPod with iTunes are: apps - including games (we talked about apps earlier), movies, music and podcasts.

Restrictions and Parental Controls for the iPod Touch

Exactly How to Set the Restrictions

Now that you know what an iPod is, you need to know what your kids can and can't see or do. Yes, there is a way to set restrictions for the iPod Touch - to a degree. Note: These restrictions will filter anything downloaded from iTunes ONLY (all apps come from iTunes). What I'm saying is, you can set these restrictions, but if the iPod is set to allow internet access, your child will have access to regular internet browsing - just like they would sitting at a computer in your home. The settings in general restrict what a child (or anyone) can download from the iTunes Store. For example, if you set the Movies setting on the iPod to PG and tried to download an R rated movie from iTunes you could not do it. BUT if there's an R rated movie somewhere out there on the internet a child could possibly see it - just like on a computer. Another example is if you set the "App" rating to 4+ and your child tries to get an app rated at 12+ they can not do it - no download button will show for that app.

We are adding a video of how to set restrictions (video is now uploaded - see below), but here's a quick explanation. After you get the iPod and sync it (basically plug your iPod to the computer and it synchronizes with iTunes). Touch the "Settings" icon, touch "General", then touch "Restrictions" and you will see "Enable Restrictions" across the top of the screen. Touch "Enable Restrictions," and you will be prompted to set a four digit numeric passcode. Enter a passcode (make it memorable!), then type it again to confirm it. Now you can see all the options for restrictions. You will see 4 categories. They are Allow, Allow Changes, Allowed Content and Game Center. Click on any option in any of the 4 categories to set that category to the appropriate setting for your child. See more details in the video.

Do you have to have iTunes to use the iPod Touch?

How much do songs cost at iTunes?

About a dollar per song.

Can you get on the internet with the iPod Touch?

Yes if you have a Wi-Fi signal.

Can you send text messages with the iPod Touch?

Yes if you download the free app "Text Free" and also have a Wi-Fi signal.

How do I know if I have Wi-Fi in my home?

To have Wi-Fi in your home you need a Wi-Fi router.

What is a PodCast?

A podcast is like a radio show that you can listen to at any time. There is no video, only sound. These are usually free and there are super educational podcasts. Our favorite is a science program.

What is an app?

An app is a tiny program you add to your iPod. If your iPod was a toolbox, it would be like a tool you add to the toolbox. Lots of apps are free.

Please ask any and all questions in this guestbook (or just say hi). I'll ask the expert (my daughter) and post the answers here.