10 Creepiest Islands in the World

If you want something different for travelling, like fear and sadness, try to visit one of these islands. I try to rank them according to their creepiness, but I guess we cannot rank fear. No competition; let me know which one is scariest for you. Or if you found other creepier islands that is not on the list.. good for you. 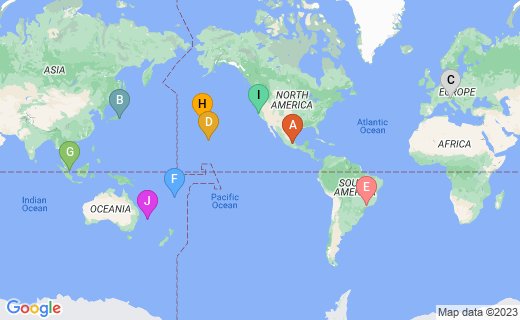 Ball's Pyramid is a stranded lone island 20 kilometres (12 li) southeast of Lord Howe Island in the Pacific Ocean. But that's not what makes it creepy. As an erosional remnant of a shield volcano and caldera that formed about 7 million years ago, scientists thought it was devoid of life. Until a group of researchers paid a visit in 2001 and found a lone shrub clinging to one of the steep cliffs. Resting in its shade were twenty seven, six-inch-long (15 cm), flightless "Lord Howe stick insects" also known as “land lobsters.”

For animal lovers, the thought of big, meaty insects is probably not a problem; it could even be a solution to world's hunger. However, for those who hate six-legged things as big as small Coca-Cola bottle crawling on their skin, Ball's Pyramid is a hell on earth.

Only a mention of Alcatraz can make the listener shudder. It is an island located in the San Francisco Bay and also the site of the world famous prison with the same name. The site was already well-known by the Natives for thousands of years and was used as a place of isolation for tribal members who had violated tribal law. It is even said that Native Americans avoided the island believing it was inhabited by evil spirits.

Many believe that Alcatraz is still home for many spirits that have once inhabited the prison. Some feel that the spirits located within are not able to venture anywhere else being that the facility is located on an island, surrounded by water. Some of the more haunted spots on Alcatraz are said to be the Warden's House, the hospital, the laundry room, the utility corridor, cell blocks A, B, and C, while the most active location appears to be cell block D, an area referred to as "The Hole".

One famous rumour about the island is about cell 14D is where an inmate screamed in terror for an entire night while shouting for help, claiming an evil entity with glowing eyes was strangling him. The next morning, when the guard went to check on him, he was lying dead on the floor with choke marks on his neck.

Dead sea birds who had foraged the area has been found with soda caps, Barbie legs and buttons in their stomachs. Should sadness oriented vacation be your cup of tea, make your next holiday the Great Pacific Garbage Patch.

The great pacific garbage patch is actually non-photogenic; the density of plastic can't be seen by naked eyes, and the area can't be seen through satellite photograph. The photo below is an illustration what Pacific Garbage Path would be if we don't something about it soon.

Galang Island belongs to group of three islands called Barelang (abbreviation of Batam-Rempang-Galang) in Riau Archipelago, Indonesia. Between 1976 to 1996, Galang Island became home to thousands of Vietnamese refugees who left their country following the Vietnam War. UNHCR and the Government of Indonesia built facilities in Galang Island to meet their daily activities, such as barracks as a residence, place of worship, hospitals, schools, and buildings that are used to meetings. All facilities were used by around 250,000 refugees; the remnant of which can still be seen today.

Some of the refugees are lucky enough to continue their journey to Australia, USA, or Canada and build their lives there. But most are not so lucky. Many Vietnamese were robbed, killed or raped shortly after they arrived in the island. Others didn't survived illness and some give up on their lives with suicide. Without even knowing the dark history, aura of creepiness can be felt strongly in the camp area. Many of the current residents (mainly caretakers) believe that it is caused by the lingering spirits who miss their loved ones and the home they left behind. Locals who stay in the main island, Batam, refuse to hang around Galang after dark. Because after the sun sets, drivers often see residents of other world standing by the roadside waving, asking for a ride.

If you thought Fiji was some beautiful island paradise, you would only be half right. With its white sand beaches and clear water, it is easy to forget that Fiji has a history involving children murder, torture, sacrifice, and cannibalism.

A missionary who visited this island during the 1840s, Rev. David Cargill, was witnessed all these things. He wrote:
"October 31st, 1839, Thursday. This morning we witnessed a shocking spectacle. Twenty (20) dead bodies of men, women and children were brought to Rewa as a present from Tanoa. They were distributed among the people to be cooked and eaten. They were dragged about in the water and on the beach. The children amused themselves by sporting with and mutilating the body of a little girl. A crowd of men and women maltreated the body of a gray-haired old man and that of a young woman. Human entrails were floating down the river in front of the mission premises."

Cannibalism is no longer exist in the island, but it will always chilled the bones when you remember that anywhere you stand on the island, a kid in the past might have die screaming on the same spot.

Nobody has the guts to actually count them, but the estimate is that there is 5 snakes in every square metre in this island off the coast of the state of São Paulo. The island that is also known as Ilha da Queimada Grande makes Anaconda looks like IKEA's Småland playground.

The snakes are not just any garden-variety serpents: 3 of the 4 documented snake species are venomous pit vipers. Reigning on the hill is Bothrops insularis, the Golden Lancehead, one of the deadliest snakes on Earth. Its poison is powerful and quickly diffused compared to those of other American snakes. By direct biting or injection into the veins, it produces acute shock and massive blood clotting.

The locals in the coastal towns near the island love to recount grisly tales of death on the island. In one, a fisherman unwittingly wandered onto the island to pick bananas but he was bitten. He managed to return to his boat, where he promptly succumbs to the snake's venom. He was found some time later on the boat deck in a great pool of blood.

A place for lovebirds and a holiday destination for family, Hawaii has other points to add in its portfolio: A place of creepy histories and paranormal activity. Haunted spots including the State Capitol, Mililani Cemetery, Manoa Chinese Cemetery, Black Point “crybabies”, and Pali Highway.

According to Hawaiian legends, taking pork over the Pali is linked to the turbulent relationship between Pele, the goddess of fire, and Kamapua‘a, a human demi-god – half-man, half-pig. The two agreed not to visit each other, but taking pork over the Pali means taking a form of Kamapua‘a from his domain (the wet side of the island) into Pele’s domain (the dry side of the island). Those who ignore Pele’s warnings risk her stopping the car from bringing Kamapua‘a’s body over the Pali.

Another supernatural place most visitors hear about is Morgan’s Corner. Said to be situated on a hairpin turn, it is known for the huge tree that looms large in urban legends of hangings and bloodied hands scraping on the roofs of cars whose drivers dared to park under it.

A quarantine station, a dumping ground for plague victims, more recently a mental hospital -- the tiny island of Poveglia in the Venice Lagoon has served many unpleasant purposes over the years. Today it stands empty, a crumbling collection of abandoned buildings and weeds run riot just two miles from the glittering palaces of the Grand Canal.

So many people were burned and buried there during the black plague that half of the island's is made up of human ash. Many legends and claims of ghosts of plague victims still surround this creepy island. Some claim to see strange lights coming from the island. Some say to still hear the moans of those who were tortured on the island. Local fishermen refuse to fish near the island in fear that they will dredge up human remains.

The Izu Islands are a group of volcanic islands stretching south and east from the Izu Peninsula of Honshū, Japan. Due to some volcanic-incidents, the air around the area is mostly sulfur. It's okay though, because nobody lives there. Right? Wrong. There are more than a dozen islands and islets in the stretch, and nine of them are currently inhabited.

And since the volcano never stopped spewing the gas, Izu Islands have the highest concentration of sulfur on the entire earth. Today, people live day and night with a gas mask either on their face, or at their side. In the middle of the night, air raid sirens go off because the gas levels are dangerously high and people would start to die. People live their entire lives like this, making graduation and wedding pictures looks like something taken from a concentration camp.

Aside from the dangers of poisonous gas, parts of the island are extremely lush and apparently the scuba diving is a beautiful experience filled with dolphin sightings. For those who believe the benefits outweigh the danger, gas masks are available upon arrival at many tourist shops on the island.

1. The Island of the Dolls, Mexico

Don Julian used to say he was haunted by the ghost of the little girl who had drowned in one of the canals around the island. Some say he used to fish the dolls from the water because he though they were real children, but the truth is he was collecting and placing them around his home as a shrine for the spirit that tormented him. At one point he even traded home grown fruit and vegetables for old dolls.

Ironically, in 2001 Don Julian Santana was found dead by his nephew, in the same canal that he said the little girl drowned in.