10 Sacred Sites to Experience in Asia

One of the most famous sacred sites of the world, Borobudur resembles something right out from a fantasy novel. The largest Buddhist shrine in the world, the clockwise journey from base to summit represents the path to enlightenment. At the summit, one is also unable to see the base. This symbolises the abandonment of lower, imperfection stages of life by pilgrims. Standing at the pinnacle of this incredible edifice is the attainment of supreme spiritual awareness.

It is hard not to be awed by Myanmar’s Shewedagon Pagoda. Plated in gold and crowned by thousands of diamonds and rubies, Shwedagon is most the sacred site for Burmese Buddhism as well as its religious centre. The pagoda is also surrounded dozens of other smaller ones. completing the imagery of a dazzling paradise.

The most famous attraction of Cambodia requires little introduction. Part of a larger temple complex called Angkor Thom, Angkor Wat translates to “city temple.” Angkor itself was the capital of the medieval Khmer empire. Some writers continue to believe that the Khmer kings ruled from here as powerful living gods.

China has many sacred sites, frequently in the form of holy mountains. Among these, Emeishan stands as one of the highest and largest, with the route from base to summit stretching over sixty kilometres. Other than the numerous century-old temples dotting this trek, Emeishan is also renowned for the sunrise view from its summit. In Chinese Xianxia fantasy stories, this golden light is revered as one of the most powerful celestial forces of good.

5. Tiantan, the Temple of Heaven

Beijing’s famous Temple of Heaven was once the personal Confucian temple of Ming Dynasty Emperor Yongle. Where the son of heaven paid tribute to heaven and the smoothness of the ritual seen as indicative of the year’s fortune. Today, the majestic symmetry of the shrine attracts hundreds of thousands of visitors yearly. This is considered the other must-visit of Beijing, after the Forbidden City.

Unlike other sacred sites worldwide, no structure in Shinto’s holiest shrine is more than twenty years old. For centuries, all buildings are dismantled every two decades and replaced by identical ones on adjacent plots. This process represents renewal, and is a reflection of nature. Visitors to Ise Jingu should also note that entry into the inner shrine is never permitted. Only Shinto priests and Japanese royalty are permitted into this sanctum.

Japan’s ancient capital is literally a heritage theme park, with several of the island nation’s oldest and most historical structures. The showpiece is, of course, the immense Todaiji and the huge Buddha within. Frisky, free-roaming deers throughout Nara Park also regularly delight visitors young and old, from near or far.

Other than the golden-roofed Potala Palace, there are several other key scared sites and monasteries in Lhasa. For example, Jokhang Temple. Jokhang Temple itself is the most important temple for Tibetian Buddhists. Here, devotees demonstrate their faith here through the esoteric circumambulation ritual known as Korwa.

Varanasi invokes one of the most famous images of India, that of solemn Hindu devotees bathing themselves in the holy River Ganges. The waters of the sacred river has long been believed to have the power to cleanse sin. To bathe in Ganges thus purifies spiritually, freeing one from the sufferings of samsara.

One of the oldest cities in the world, Samarkand was the cultural centre of Islam in Central Asia. Despite several brutal conquests and reigns throughout the centuries, the historical centre survived remarkably intact. If you wish to Islamic calligraphy and geometric motifs at their most magnificent, this is the foremost place to visit. 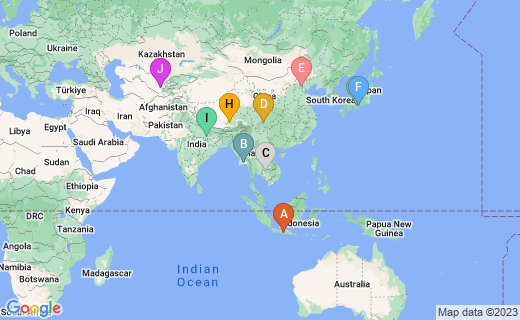 How many sacred sites in this list have you visited?